The 6 types of lawyer movies 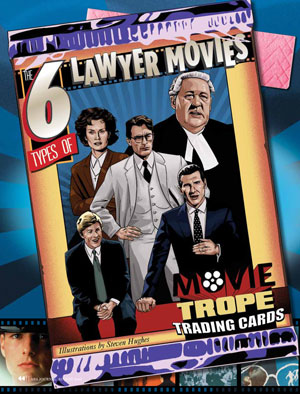 When it comes to films about the legal system, spoiler alerts aren’t necessary. For the most part, there’s little ambiguity about where a law film is going—no real surprises, few cliffhangers and not much in the way of romance. Movie lawyers are not unlike their real-life counterparts: Long days of reviewing documents and writing briefs are not conducive to getting the girl, or guy.

In many ways, however, law films mirror other cinematic genres. For instance, American movies are all but required by law—if not through Hollywood custom—to have happy endings. Movies about the legal system are no different. Legal relief, in movies, actually means what it says: A satisfying resolution accompanies the film’s end; a fictional client is likely to feel better after his brush with the law. Audiences, meanwhile, are sent home satisfied that the truth was discovered, justice was done, or just deserts received.

For the price of a movie ticket and a box of popcorn, moviegoers receive from an imaginary legal system what they rarely achieve when coming before the actual law.

This alternate legal universe of movie magic—where lawyers are virtuous, clients receive their day in court and the public maintains its faith in the rule of law—seemingly troubles very few who are more accustomed to the misery and humiliation that final judgments often bring. Happy endings, and judges dressed up as tooth fairies, occur with the same regularity. Lovers of law films apparently don’t mind. The Avengers aren’t real either.

All professions are given their life-affirming, redemptive, good-triumphing-over-evil screen tests from time to time: the press in Spotlight; teachers in Mr. Holland’s Opus; doctors in Patch Adams, dying baseball players in The Pride of the Yankees; even prostitutes in Pretty Woman. Yet with all that sugarcoated predictability and the inevitable Hollywood plotlines, law films are not without their own unique charms—the various subgenres and artistic tropes that make such movies both familiar and entertaining.

The legal system—its very existence and its proneness to failure—provides instant drama: two sides pitted against one another with a life, or a higher truth, on the line. Location shots require little imagination. The set pieces are as customary as shoot-outs in the Wild West. Churchly courthouses and mahogany-walled interiors; trim and tailored heartthrobs (or the rumpled and avuncular defender) delivering summations to enraptured juries; the bored bailiffs, weary stenographers, crotchety judges, fretful defendants and betrayed plaintiffs—all in desperate need of a hug.

These films are improbably captivating. Their popularity presents an obvious modern-day paradox. Movies about the law are thrillers without serious “action” sequences—no car chases, dodged bullets or close calls. Murder happens, but often offscreen. Forensics is tedious; cross-examinations are combative but bloodless. And yet somehow the choreography of the law can be made exhilarating in movies. When a director shouts “Action!” in a law film, everyone knows he has something else in mind.

Leaping to one’s feet to render an objection—that obligatory courtroom calisthenic that cues the judge to bang down on his or her gavel—is generally how a protagonist builds up a sweat in a movie about the law. Another comes by way of gasps from the gallery upon learning who actually “did it.” That’s it for cinematic excitement. Audiences aren’t even treated to lawyers squabbling over their fee. The search for truth supplies all the necessary dramatic tension and forward momentum. And yet audiences are as enthralled as when they watch two armies hurtling toward one another. (12 Angry Men features a lot of sweating, but the fuming jurymen barely rise from their seats.)

Read about the six types of lawyer movies in our gallery, and then take a quiz to find out which movie lawyer you would be.

Thane Rosenbaum is a novelist, essayist and distinguished fellow at New York University School of Law. There he directs the Forum on Law, Culture & Society, which hosts the annual FOLCS Film Festival. He is a regular adviser and contributor on law in popular culture for the ABA Journal.

The 6 Types of Lawyers You See in the Movies

Welcome to the movies

All professions are given their life-affirming, redemptive, good-triumphing-over-evil screen tests from time to time: the press in Spotlight; teachers in Mr. Holland’s Opus; doctors in Patch Adams, dying baseball players in The Pride of the Yankees; even prostitutes in Pretty Woman. Yet with all that sugarcoated predictability and the inevitable Hollywood plotlines, law films are not without their own unique charms—the various subgenres and artistic tropes that make such movies both familiar and entertaining.

Quiz: Which movie lawyer are you

Previous:
What 'Hamilton' teaches lawyers about framing a story