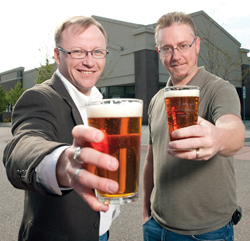 Kevin E. Houchin, a Fort Collins, Colo.-based solo practitioner, is placing a bet on an entrepreneur’s dream of opening a 14,000-square-foot brew pub.

Gene Gregg has professional brewing experience, clearance from the city and the go-ahead from Rite Aid, which owns commercial space on the southern end of town once intended to be a drugstore. While Gregg lacks seed capital, his enthusiasm for the project convinced Houchin—who works primarily with startups—to provide legal services for no fee in exchange for a 5 percent piece of the action.

“Somebody comes in with an idea that sounds fun, that I’d like to be involved with anyway and they’re obviously going after their passion, then I’m open to doing it,” says Houchin, adding that he was selective about the decision and has frequently turned down similar offers from entrepreneurs whose ideas seem questionable.

“He’s pretty far down the line with his plans and approvals,” says Houchin, who will handle matters related to incorporation and ownership throughout the life of the venture, services he estimates could be worth $5,000 to $10,000 in the first six months alone.

A TOUGH CALL FOR SOLOS

During the dot-com era of the 1990s, it was common practice for large, tech-oriented law firms to take equity stakes in Silicon Valley ventures they represented. Experts say it’s less common for solos, who live and die by their cash flow. But in a difficult economy, in which credit is tight and small businesses are strapped for cash, the practice could be gaining popularity.

For Gregg and other early stage entrepreneurs looking to hold down costs, such exchanges can be second nature. Gregg interviewed several local attorneys until he found one willing to accept the stock-for-services arrangement.

“I’m a firm believer in trade,” says Gregg, who previously owned a brew pub in Oregon, where he frequently offered beer for the services of contractors. “This is a little different, giving up ownership of the business. But why wouldn’t I want an attorney as one of my business partners?”

The decision to provide legal services in exchange for equity or other noncash compensation is always a tough call, based on the attorney’s careful due diligence and gut perception of whether a fledgling venture has staying power. Even if the business succeeds, it will likely be several years before shareholders can cash out their positions, making it even more critical that the lawyer place some clear parameters on the range of services to be provided.

“I see the allure, but I see how these usually go,” says Brian Elliott, a Las Vegas solo who works with small business. “From a practical standpoint, the economics don’t work out.”

Despite common perception, the practice can be ethically sound, as long as the attorney adheres to certain protocols, including those stipulated by Rule 1.8(a) of the ABA Model Rules of Professional Conduct, says Chicago lawyer William Freivogel, who advises other lawyers on ethical conduct.

“I know of no ethical reason why a solo practitioner should not do this,” says Freivogel, who also chairs the ABA Section of Business Law’s committee on professional responsibility.

Among other stipulations, Freivogel cautions that attorneys should limit their equity position to a small stake, usually no more than 10 percent. He also recommends background checks to ensure that the business owner has not been implicated in criminal activity.