A 'conversation' with the late, great lexicographer Samuel Johnson 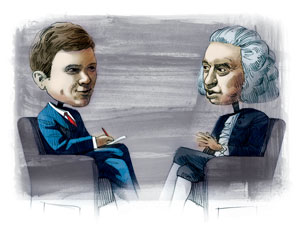 Recently I had the opportunity to sit down with the great Samuel Johnson (1709–1784)—or rather with his books—to see what he had to say about lawyers, their profession and their writing. I essentially interviewed him through his known sayings.

Johnson was the greatest English writer ever to produce a dictionary—A Dictionary of the English Language (1755)—and among the greatest literary figures in the history of English letters. In fact, he wrote what is perhaps the greatest letter ever written. It’s a comeuppance to Lord Chesterfield, who promised support for Johnson’s dictionary but then never came through. In the end, months before the tome was to be published, Lord Chesterfield started claiming some credit for it. Johnson responded: “Seven years, my lord, have now passed … and [ I ] have brought it at last to the verge of publication without one act of assistance, one word of encouragement or one smile of favor.” This immortal letter is worth reading in its entirety. You can easily find it by searching “letter to Chesterfield.” You’ll find that it’s astonishingly good.

Johnson gave excellent answers to the questions I posed. The interview was held on New Year’s Day 2016. I’ve lightly edited his remarks. Although Johnson wasn’t a lawyer, he was highly regarded for his depth of legal knowledge. Most of these comments date from 260 years ago, but most are as applicable today as when he uttered them.

Is the study of law worthwhile?

“The study of law is copious and generous, and in adding your name to its professors you do exactly what I always wished when I wished you best. I hope that you will continue to pursue it vigorously and constantly. You gain, at least, what is no small advantage—security from those troublesome and wearisome discontents who are always obtruding themselves upon a mind vacant, unemployed and undetermined.” [Letter to James Boswell, Aug. 21, 1766.]

But the profession can be hard!

“If the profession you have chosen has some unexpected inconveniences, console yourself by reflecting that no profession is without them and that all the importunities and perplexities of business are softness and luxury compared with the incessant cravings of vacancy and the unsatisfactory expedients of idleness.” [Ibid.]

You’re a lexicographer. How would you define law?

“The law is the last result of human wisdom acting upon human experience for the benefit of the public.” [“Sir,” Said Dr. Johnson at 51.]

Some people say that the law promotes dishonesty.

“Why no, sir, if you act properly. You are not to deceive your clients with false representations of your opinion. You are not to tell lies to a judge.” [4 Boswell’s The Life of Samuel Johnson at 47.]

What do you think of a lawyer who supports a cause that he or she personally thinks to be bad?

“Sir, you do not know it to be good or bad till the judge determines it. You are to state facts fairly so that your thinking, or what you call knowing, a cause to be bad, must be from reasoning, must be from supposing your arguments to be weak and inconclusive. But, sir, that is not enough. An argument that does not convince you may convince the judge to whom you urge it. If it does convince the judge—why then, sir, you are wrong, and he is right. It is his business to judge, and you are not to be confident in your own opinion that a cause is bad but to say all you can for your client and then hear the judge’s opinion.” [Ibid.]

Naysayers argue that it impairs your honesty to pretend to have zeal when you have no zeal—or when you appear to have one opinion when in fact you have another.

“Why no, sir. Everybody knows you are paid for affecting warmth for your client; and it is, therefore, properly no dissimulation: The moment you come from the bar you resume your usual behavior. Sir, a man will no more carry the artifice of the bar into the common intercourse of society than a man who is paid for tumbling upon his hands will continue to tumble upon his hands when he should walk upon his feet.” [Ibid. at 47–48.]

In 1623, Prince Charles (Stuart) said that he couldn’t be a lawyer because he couldn’t “defend a bad nor yield in a good cause.” Is that a fair criticism?

“Sir, this is false reasoning because every cause has a bad side. And a lawyer is not overcome though the cause that he has endeavored to support may be determined against him.” [2 Life of Johnson at 214.]

What about the business side of being a lawyer? Lots of lawyers worry about how to get clients and develop their business.

“Sir, it is wrong to stir up lawsuits; but when once it is certain that a lawsuit is to go on, there is nothing wrong in a lawyer’s endeavoring that he shall have the benefit rather than another.” [2 Life of Johnson at 430–31.]

Can a person make a good living in law today?

“You must not indulge too sanguine hopes, should you be called to the bar. I was told, by a very sensible lawyer, that there are a great many chances against anyone’s success in the profession of the law; the candidates are so numerous, and those who get large practice so few. He said it was by no means true that a man of good parts and application is sure of having business, though he indeed allowed that if such a lawyer could but appear in a few causes, his merit would be known and he would get forward. But that the great risk was that a man might pass half a lifetime in the courts and never have an opportunity of showing his abilities.” [3 Life of Johnson at 179.]

A friend was told she might not be able to handle losing cases to lawyers she thought were fools.

I heard the charge recently that lawyers can be too narrow in their thinking.

“Why no, sir; Judge Matthew Hale was a great lawyer, and wrote upon law and upon other things. John Selden, too.” [The Conversations of Dr. Johnson at 96.]

That’s true. And Francis Bacon as well. Some say that Lord Coke was narrow.

“Why, I am afraid he was; but he would have taken it very ill if you had told him so. He would have prosecuted you for scandal.” [Ibid.]

Have you seen how repetitious lawyers can be in oral argument?

“It is unjust, sir, to censure lawyers for multiplying words when they argue; it is often necessary for them to multiply words. If you say it but once, the judges miss it in a moment of inattention.” [4 Life of Johnson at 74.]

Do you think legislatures ought to pass more laws?

“A country is in a bad state if it is governed only by laws; because a thousand things occur for which laws cannot provide and where authority ought to interpose.” [5 Life of Johnson at 177.]

What a pleasure it’s been to talk with you.

“You are a lawyer. Lawyers know life practically. A bookish man should always have them to converse with. They have what he wants.” [Ibid. at 306.]

We were soon joined at Ye Olde Cheshire Cheese (Johnson’s favorite pub) by Johnson’s friends: his biographer, Boswell; the writer Oliver Goldsmith; and Joshua Reynolds, the painter. At one point Boswell said that Johnson should have been a lawyer.

Boswell: “What a pity it is, sir, that you did not follow the profession of the law. You might have been lord chancellor of Great Britain and attained to the dignity of the peerage.” [Conversations of Dr. Johnson at 294.]

Johnson: “Why will you vex me by suggesting this, when it is too late?” [Ibid.]

The conversation soon strayed from law, but it was fascinating throughout. The most remarkable thing Johnson said on New Year’s Day was this: “When I review the last year, I am able to recollect so little done that shame and sorrow, though perhaps too weakly, come upon me.” [Everybody’s Boswell (1930) at 141.]

A modest man, he was.

This article originally appeared in the March 2016 issue of the ABA Journal with this headline: “Immortal Utterances: A ‘conversation’ with the late, great author, lexicographer and letters writer Samuel Johnson.”

Bryan A. Garner, the president of LawProse Inc., is the author of many books, including The Winning Brief and Legal Writing in Plain English. He is the distinguished research professor of law at Southern Methodist University.