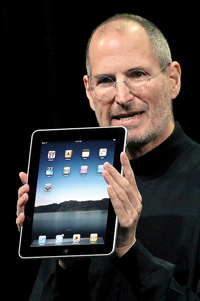 It doesn’t take a rocket scientist to realize that the tablet form is one that works well for lawyers. We use a tablet of paper so universally associated with lawyers that everyone calls it a “legal pad.”

The notion of an electronic legal pad has been kicking around for many years. And it makes sense: an electronic pad that never runs out of paper, makes our notes searchable and lets us take everything we need with us. But the history of electronic versions of the legal pad is not a record of successes.

Will Apple’s new iPad and the new generation of tablet computers finally open the way for lawyers to replace paper legal pads with electronic ones?

Steve Jobs’ announcement of the iPad created more buzz and attention than President Barack Obama’s State of the Union speech on the same day. Tech pundits repeatedly used the term game-changing in connection with the iPad.

Many people have described the iPad as an oversize iPhone or iPod Touch—very thin, lightweight, with a 9.7-inch screen and Apple’s customary great design. All reports indicate it’s also superfast. The big news is that iPads will run iPhone apps (more than 100,000 of them), and iPads will also connect to the Inter net through Wi-Fi and 3G (in some models). Prices should range from $500 to $800.

The iPad is a multitouch device. Like the iPhone and the newest generation of mobile phones, you use your fingers on the screen to navigate, click and enter data. There is no stylus. The iPad has a limited amount of storage and no USB port, and it eliminates a few other features you would expect on a laptop computer or netbook. Some, including me, have described the iPad as much more of a content consumption device than a content creation device.

Jobs described the iPad as creating a new category of device between a mobile phone and a laptop computer. That’s the best way to think about an iPad—just like your paper legal pad. The big question is: Do we need another electronic device that fits that space?

I’m the eternal optimist about tablet devices for lawyers. I used a tablet PC for several years until I wore it out. Five years ago I wrote an article predicting the combination of tablet PCs and Microsoft Office OneNote (note-taking and information management software) would be exactly the technology lawyers needed—not one of my most accurate predictions, but certainly one of my most heartfelt.

What happened? Tablet PCs carried a price premium. OneNote was typically not part of the standard Office suite law firms used. Law firm information technology departments did not want to support tablets and saw them as either luxury items or toys. Most important, the PC industry did not seem to be committed to the tablet platform.

The iPad is touted as an e-reader, an Internet device, a media player, an e-mail device and more. Whether an onscreen keyboard will be adequate for note-taking and document creation is a different question.

However, the true potential for the device comes from its ability to run apps. An app like Note Taker, which lets you write on the screen with your finger and capture and work with what you wrote, could play a key role in iPad acceptance. It was developed by Dan Bricklin, an inventor of the first PC killer app, the VisiCalc spreadsheet.

Will any technology device ever fully replace the ubiquitous legal pad? I’ll take the easy way out and say it’s too early to tell. Yet, it does feel like something big is about to happen, and we are moving to an era of computing where we have more choices and are more likely to pick devices that best fit our needs. Lawyers who travel a lot might find the case for an iPad compelling. Lawyers who work only at their desks might find little use.

While I’d like to see what would happen if an innovative large firm did a wholesale adoption of iPads, I don’t think that’s likely. Where I expect to see significant early iPad adoption is among solos and small firms (including boutique firms started by refugees from large firms) that are already using the Internet and technology in new ways.

I don’t think we’ll see the legal pad disappear anytime soon, but it’s about to get its biggest challenge yet.