A new documentary takes on the 'divorce business' 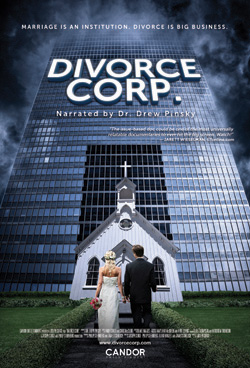 With the tagline “Divorce is big business” and a trailer full of ominous music, the documentary Divorce Corp. might seem like a feature-length complaint about lawyers. But Joe Sorge, who co-wrote and directed the film, says it’s neither anti-lawyer nor anti-judge. Rather, he says, it’s a criticism of the adversarial system used in U.S. family courts.

“The central theme of the movie is that by deploying the adversarial system to settle family matters, we’ve made divorce overly complicated, overly acrimonious and overly expensive,” says Sorge, a biotech entrepreneur turned filmmaker.

Made for $2 million, Divorce Corp. grew directly out of Sorge’s personal experiences. Years after a “relatively straightforward” divorce, his ex-wife asked for more child support. He expected the case to be resolved fairly quickly because the disputed amount would have had little effect on either party’s finances.

Instead, he said, the judge found the legal issues involved very interesting—and the case dragged on for several years, creating high legal bills, a sanctions order and, eventually, a published appellate opinion. The experience drew Sorge’s attention to problems with the system.

“I just realized that the incentives were upside down in the family court system,” he says. “People are people and will respond to incentives.”

The movie’s trailer and marketing suggest those incentives are financial. The website calls it a shocking expose of the $50-billion-a-year U.S. family law industry, and the trailer features various professionals discussing the high costs of divorce. Among them is Los Angeles civil rights attorney Gloria Allred, who is pictured saying parties can get as much justice as they can afford.

The film closes by suggesting that U.S. family law import some of the features of divorce in Scandinavian countries, where couples simply fill out a form. In addition, Sorge says, there’s no post-judgment spousal support, and child support is a fixed amount irrespective of income or time with the children, which he believes prevents dragged-out support and custody battles.

The film was released in January in select cities, and the documentary is now available on DVD.

This article originally appeared in the March 2014 issue of the ABA Journal with this headline: “$plit$ville: A new documentary takes on the ‘divorce business.’ “