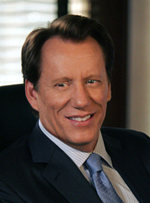 Playing a hard-driven, unscrupulous defense attorney-turned-prosecutor in Shark was a real eye-opener for me as an actor and, more importantly, as a citizen. Not only were many members of our writing staff attorneys themselves, but our technical advisers included Robert Shapiro and Ira Reiner. Rikki Klieman was a prosecutor in real life, and an occasional cast member as well.

The basic conceit of our show was that in general defense attorneys are unscrupulous dogs, making huge fortunes defending the absolutely guilty with impunity; prosecutors, on the other hand, are stern and humorless guardians of justice, hamstrung by their own ethics and the regulatory impediments of the system. My character, Sebastian Stark, was a clever creation thrown into that ethical cesspool: an arrogant, brilliant, unprincipled superstar defense attorney who becomes a prosecutor in a high-profile crime unit for the city of Los Angeles as an act of atonement.

I anticipated brilliant courtroom maneuvers from the writing staff, and I wasn’t disappointed. Sebastian Stark’s greatest victories, however, emanated from backroom chicanery and clever twists, not only of plot but also ethics. The first season culminated way outside the moral boundaries with an extraordinary premise: Stark, frustrated in his inability to convict a heinous serial killer, frames him for murder.

I was fascinated most by the constant walk along the razor’s edge of legal ethics. Every episode was a tarnished morality tale, often with a surprisingly frustrating lack of emotional closure. Bad guys often win, and at times the best one can do is make a deal. When the good guys win, it is often at the expense of one’s hubris, sanity and, once in a great while, one’s very soul.

I liked that our show and others peppering the current entertainment landscape reflect the slippery and sloppy moral malaise of contemporary times. As outraged as everyone seems to be these days over hot-button social issues, we would be hard-pressed to say that any consensus exists about the fundamental right or wrong of any particular cultural issue. There was a time not so long ago when Sebastian Stark would indeed have been a shark. Nowadays he is more probably a very big fish in a school of casually lethal legal piranha.

When I was a child, my aunt was the secretary to the public defender in the state of Rhode Island for roughly three decades. Rhode Island was generally known as a charming New England state, but it was actually a hotbed of low-level but nonetheless lethal organized crime.

Organized-crime guys often used the public defender’s office as a front in their criminal trials, claiming they were just poor laborers wrongly accused. If, their argument often went, they were these “Mafia big shots,” how did they happen to be here in court with the lowly public defender as their only sad champion? In the background, of course, pulling the legal strings and most probably greasing a few outstretched palms, were the state’s high-powered and highly paid top criminal defense lawyers.

Shark made me appreciate the eternal adage “The more things change, the more they stay the same.” If Sebastian Stark had defended Joey “Bag of Donuts,” the guy most surely wouldn’t have spent his days walking the yard at the Rhode Island Adult Correctional Institute. If Stark had prosecuted him, however, old Joey would likely have been hanged.

Oh, and a little note about my aunt. She was once mugged as an elderly retiree and hurt by some street thugs in what was commonly known as a Mafia neighborhood—a classic no-no. She had always been cordial to the Mafia defendants who came through her office and had never, as a matter of policy, passed judgment. Suffice it to say the street thugs were found and never had to endure the rigors of the Rhode Island legal system. Conventional wisdom at that time had it that they experienced a simpler, more biblical rendition of justice. Stark would no doubt have been proud.