Race to the Bottom: Guns, vigilantism and unequal 'justice' 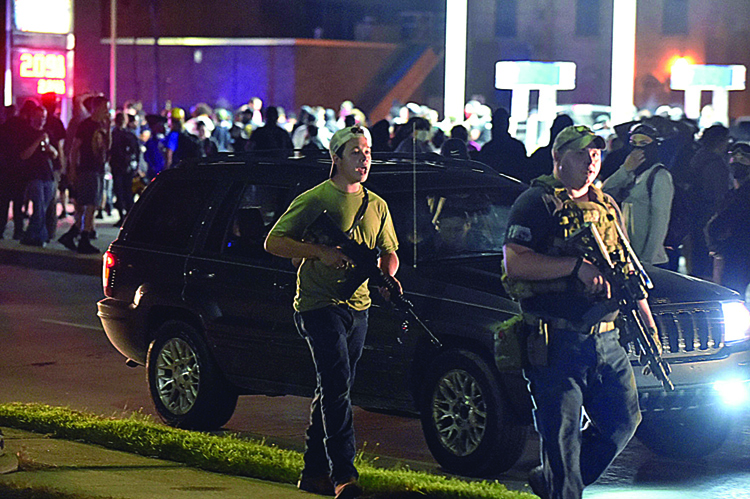 Kyle Rittenhouse in Kenosha, Wisconsin, on the night he fatally shot two men. He was aquitted in Novemnber. Photo by Adam Rogan.The Journal Times via AP, File

Years ago as a TV reporter working with our chief photographer out in the field in Nashville, Tennessee, I was surprised to learn he always carried a gun “just in case,” he told me, patting his hip.

Certainly, the job of a TV news reporter often meant heading toward danger instead of away from it—such as when covering a hurricane or fire; descending on the scene of a crime or SWAT standoff; or knocking on doors in inhospitable situations, desperate for on-camera interviews. I’ve been warned threateningly to leave the premises; while working in Florida, I’ve had racial epithets hurled at me or at the Black photographer with me by men driving by in pickup trucks; with my cameraman, I’ve walked the streets of seedy parts of myriad towns at all hours of my nightside shifts. But in 10 years on the street covering danger and depravity, I never thought, What I need is a gun.

Living in this country, I’ve personally never felt a firearm would make me feel more secure. But it’s clear there are a startling number of people who believe otherwise and are fixated on gun ownership. And the resultant proliferation of firearms, from hunting rifles to semiautomatic weapons, has earned the United States the dubious distinction of being the deadliest country in the Western world.

Some people say their guns are for self-defense. Often, guns are carried by bad actors to perpetrate violence or as a means of intimidation. Whatever the motivation, there is an explicit potential for violence when a firearm is present. And now, carrying, brandishing or waving guns around—particularly at Black Lives Matter protests—has been endorsed by a segment of the population, despite the lawless aggression and vigilantism it promotes.

It is impossible to close your eyes and reframe the Kyle Rittenhouse trial making the defendant a Black man with three white victims, have an all-white jury and a white judge and imagine the same result. The idea that the jury would still have found justifiable self-defense would require a fantastical contortion of reality. In Rittenhouse’s case, it is certainly within the realm of possibility that the jury would conclude he was shooting because he felt an imminent threat. But on the flip side, the success of our country’s multibillion-dollar prison-industrial complex is fueled by the convictions and incarceration of Black men and women, an untold majority of whom were not accorded the same benefit of the doubt—or mercy—shown Rittenhouse.

And just because the three white men charged in the modern-day lynching of Ahmaud Arbery on a Georgia street in broad daylight were convicted of murder doesn’t mean the exception makes the rule. Just because a Minneapolis jury returned a guilty verdict based on nearly nine minutes of close-shot execution video in the George Floyd case doesn’t mean we’ve reached post-racial equal justice. Instead, unjust laws and unequal protection under the law continue to immunize police—such as the Kenosha, Wisconsin, officer who shot Jacob Blake seven times in the back in front of his children, and violent white antagonists like Rittenhouse, who killed two men and walked—in cases suffused with racial animus. All too often, our “rule of law” has evolved to become not the savior of the civil rights movement but a proxy oppressor.

The statistics prove what we already know about America: Innocent Black people are seven times more likely to be wrongfully convicted of murder than innocent white people, according to data from the Innocence Project. And about one-third of unarmed people killed by police are Black. Similarly, cases with a white assailant and a Black victim were 281% more likely to be found justified than cases where both perpetrator and victim were white, based on an analysis of homicides done by the Urban Institute, a nonprofit research organization.

After the Rittenhouse verdict, the family of Anthony Huber, one of the men he shot to death, released a statement saying his total acquittal “sends the unacceptable message that armed civilians can show up in any town, incite violence and then use the danger they have created to justify shooting people in the street.”

Why isn’t it a provocation to carry and brandish an assault rifle in public, particularly at tense protests? In some jurisdictions, that could be considered criminal menacing. If you come armed and itching for a fight, shouldn’t you have some culpability? If you engage in antagonizing behavior and end up using lethal force—why should you be completely exonerated under the law?

As the New York Times reported in the article “Can Self-Defense Laws Stand Up to a Country Awash in Guns?” we are grappling with a convoluted web of legislation that leans heavily in favor of the armed individual’s right to engage in deadly force. In many states with self-defense laws, the burden of proof shifts away from the shooter and requires prosecutors to prove the defendant was not acting in self-defense. And under “stand your ground” laws, despite being armed with a lethal weapon, an individual can claim a perceived threat and there is no duty to retreat.

Harvard University researchers have confirmed the obvious: Most “purported self-defense gun uses are gun uses in escalating arguments” as opposed to in defense of an attack. And since dead men tell no tales, rebutting the presumption of the shooter’s version of the story—without clear video—is mostly an exercise in futility.

But these finer points of logic are becoming irrelevant as a growing network of laws and court rulings promotes armed vigilantism, is co-signed by the National Rifle Association and protects the interests of gun owners—specifically white gun owners. Legislators are mostly loath to change legacy laws like the “castle doctrine,” stand your ground and self-defense that are part of a post-slavery playbook that perpetuates injustice and systemic racism.

Observers rightfully fear domestic terrorism and white extremism will be emboldened by a series of rulings that, with a wink and a nod, reassure that might equals right, and that if you don’t get off entirely, you’ll still get off lightly. Seventeen-year-old Kyle Rittenhouse recognized this when he went to Kenosha armed with an assault rifle. No property owner asked for the teen’s “protection,” and it wasn’t his town. No matter: Rittenhouse was in Kenosha to demonstrate the dominance of the white power structure. And he succeeded.

Intersection is a column that explores issues of race, gender and law across America’s criminal and social justice landscape. This column reflects the opinions of the author and not necessarily the views of the ABA Journal—or the American Bar Association.