A Touch of Terror? 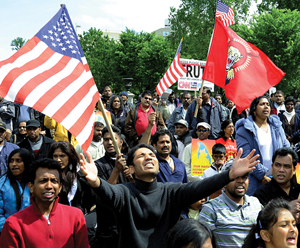 Ralph Fertig believes in peaceful social advocacy—and he has the scars to prove it. In 1961, he was a young social worker in Chicago when he journeyed to Alabama and rode with the Freedom Riders to integrate the interstate buses. He was arrested and beaten in a Selma jail, leaving him with broken ribs, but he calls it “one of the proudest moments of my life.”

To his surprise, however, he has been caught in a long legal fight with the U.S. government over whether he can engage in peaceful advocacy in this country for another aggrieved minority: the Kurds in southeastern Turkey.

This time, Fertig’s efforts have spawned the U.S. Supreme Court’s first major test of whether the war on terrorism conflicts with the free speech principles of the First Amendment. As the government’s lawyers see it, Fertig’s advocacy for the Kurds could amount to “material support” for terrorism, a crime punishable by up to 15 years in prison.

“I am opposed to violence of all sorts. It seems crazy to me that I could go to jail for trying to persuade people to use nonviolent means to achieve their rights,” says Fertig, now 79 and president of the Los Angeles-based Humanitarian Law Project, a nonprofit human rights organization begun in 1985. The case, Holder v. Humanitarian Law Project, is scheduled for oral argument on Feb. 23.

To read the competing briefs is to wonder whether the two sides are talking about the same case. For the civil libertarians who have backed Fertig, the case has echoes of the McCarthy era and the civil rights movement. It tests whether guilt by association will be upheld, they say, and whether advocacy of nonviolence can be punished as a crime.

The government’s lawyers, by contrast, hear the echo of Sept. 11, 2001, and the need to combat terrorism and all who support it. The ban on material support to terrorists and terrorist organizations is a “vital part of the nation’s efforts to fight international terrorism,” said U.S. Solicitor General Elena Kagan in her brief. Since terrorism is by its nature a conspiracy, it is necessary, she said, that the authorities may prosecute and punish those who provide aid and comfort to terrorist organizations.

Since 2001, more than 120 people have been charged and 60 have been convicted under this provision, most for training with al-Qaida in Afghanistan, Kagan said. In 1997, the Kurdistan Workers Party (known as the PKK) was among 30 groups designated a “foreign terrorist organization” by the State Department. As such, aiding it and any of its members is a crime.

Defending Fertig and his allies is Georgetown law professor David D. Cole, who began his brief to the Supreme Court by urging the justices “not to be misled” by the talk of material support for terrorists. “That language and the image it conjures have no relevance to plaintiffs’ challenge,” he wrote. They “seek to engage in pure political speech promoting lawful, nonviolent activity.” Since 1998, Cole has been representing the Humanitarian Law Project. Its several dozen activists include lawyers who have worked with the Tamil Tigers, another banned group.

The ban on material support to terrorists predates 9/11. It was part of the Antiterrorism and Effective Death Penalty Act of 1996. There, material support was defined broadly to include providing “service, … training, expert advice or assistance (and) personnel.”

These provisions were tweaked by the USA Patriot Act to say, for example, that training refers to teaching a “specific skill.” Nonetheless, the precise meaning of the words has been the focus of a court fight that has continued for more than a decade.

Cole insisted that the law was too broad from the start, and that the government has failed to focus its prohibitions on those who knowingly support violence and terrorism. “This statute is so sweeping that it treats human rights activists as criminal terrorists,” he said. “In our view, the First Amendment does not permit the government to make advocating human rights or other lawful, peaceable activity a crime simply because it is done for the benefit of, or in conjunction with, a group the secretary of state has blacklisted.”

Cole has prevailed so far in the lower courts. in 1998 a federal judge in Los Angeles enjoined the law from being enforced against the Humanitarian Law Project, and that order was upheld on appeal. In a 2004 round of litigation, Cole attacked the provisions banning “expert advice and assistance” because the government has said that filing an amicus brief in court, sending a petition to Congress or writing a newspaper op-ed article could qualify as providing expert “assistance” to a terrorist group.

As evidence, he cited a court exchange with a government lawyer who was asked to clarify the law before the 9th U.S. Circuit Court of Appeals at San Francisco.

“If you have an attorney in the U.S.,” the court asked, who “wishes to counsel one of these organizations on how to argue their case, or how to bring their case, before the United Nations, is that a crime?”

Last year, the 9th Circuit barred enforcement of provisions involving “service,” “expert advice or assistance” and “training” because they were unconstitutionally vague. Kagan petitioned for Supreme Court review and argued the 9th Circuit had gone way too far—that its ruling strips the government of the ability to prosecute someone who trains people affiliated with a terrorist group to build bombs, fly an airplane or launder money.

Since Fertig and his fellow activists have not been prosecuted, the case before the Supreme Court figures to be a battle of hypotheticals. While Kagan talks about experts who teach terrorists to build deadly weapons, Cole says Fertig wants to provide advice and training on filing petitions to the United Nations.

Fertig, who is a retired administrative law judge in Los Angeles, says he fears the law could be a trap for activists like him if it were strictly enforced. “I have visited Turkey and gone to Kurdistan and talked with Kurds about taking their case to the United Nations. But I don’t know if the people I was speaking with were members of the PKK. They certainly wouldn’t tell me because it’s an outlawed organization,” he says. Simply wearing the Kurdish colors in Turkey can lead to your arrest and prosecution, he adds.

SUPPORT FOR A NARROWER MEASURE

In the end, the Supreme Court is not likely to void the criminal ban on training, since doing so would take away the government’s power to prosecute those who went to al-Qaida camps to practice with weapons. Despite their strong disagreements on what is at issue, both Kagan and Cole offered the court a suggestion on how to save the law by narrowing it.

In Kagan’s view, the court would revise the statute to say it does not extend to “independent advocacy” by activists like Fertig. “A person who acts independently to advocate for a terrorist group would not commonly be considered to have knowingly provided something ‘to’ that terrorist organization,” she wrote.

Cole said that concession would not suffice. He said someone who wrote independently on behalf of the PKK could be accused of collaborating with the group if he had associated with some of its members. Citing the court’s struggle with the postwar anti-communist statutes, Cole said the law should require proof that someone who writes or speaks on behalf of a group such as the PKK intended to further its illegal and violent activity.

This case adds another free speech dispute to a court term that features a number of significant First Amendment cases. Among the other issues the court is considering are the long-standing ban on direct corporate funding of ad campaigns in federal elections, whether depictions of animal cruelty can be banned by law, and whether a cross can stand in a national forest as a war memorial.

In the spring, the justices will consider whether the First Amendment forbids a university from denying recognition to a student chapter of the Christian Legal Society because it excludes gays and lesbians.