ABA leaders vow to fight effects of racism and COVID-19

By Matt Reynolds and Amanda Robert 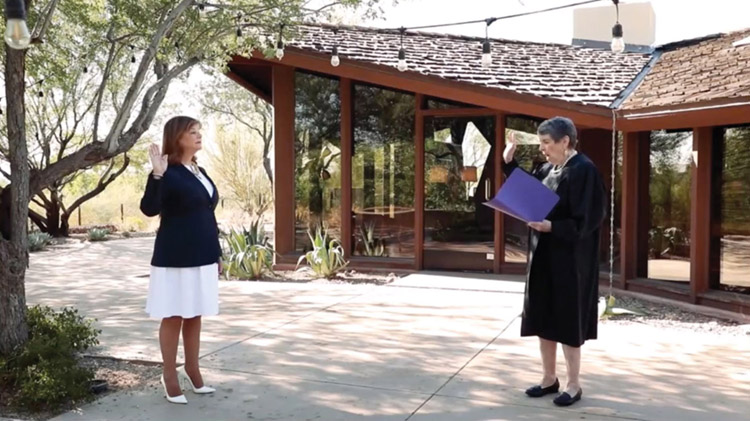 Patricia Lee Refo was sworn in as ABA president by Mary Murphy Schroeder, a senior judge of the San Francis-co-based 9th U.S. Circuit Court of Appeals. Photo by Lee Rawles.

In her final speech before the House of Delegates, outgoing ABA President Judy Perry Martinez recognized the burden the pandemic has placed on the legal profession and urged a forceful response to racial injustice.

Martinez’s overriding message was that lawyers should not shy away from the fight to root out racism. The president stressed the importance of making sure nobody—regardless of their race, gender, ethnicity or identity—is left behind or excluded. She asked members to “embrace change and innovation” and make sure people have access to essential criminal and civil legal services during the pandemic.

“We miss gathering in person. Far worse are the economic and health setbacks, the pain and the suffering many have experienced directly or witnessed as a result of COVID-19,” Martinez said.

With thousands of Americans taking to the streets and calling for police reform and speaking out against racial injustice, Martinez’s final speech captured a moment when the entire legal system is in the spotlight.

“Everyone needs to be at the table to achieve what for too many is a long-overdue breaking of the silence regarding the truth about our legal system and society: the existence of persistent, overt and implicit racism,” Martinez said.

The ABA Coronavirus Task Force has been part of the effort to meet legal needs during the pandemic, and Martinez acknowledged the challenges of the current economic climate.

“Please reach out to your colleagues, particularly solo practitioners, young lawyers and law students, to let them know that they are not alone,” she said.

After Martinez’s speech, the gavel was handed to incoming ABA President Patricia Lee Refo. She was sworn in by Mary Murphy Schroeder, a senior judge of the San Francisco-based 9th U.S. Circuit Court of Appeals.

Refo said she would continue to fight for the rights of everyone who comes into contact with the legal system, at home and abroad.

“Hear me on this: If the president of the American Bar Association—pandemic or no pandemic—can help anywhere in the world to advance the rule of law and the cause of justice, I will be there. I will stand anywhere for the values we believe in,” Refo told the House.

Refo also noted the toll the pandemic had taken and the “tsunami of legal needs” related to evictions, foreclosures, bankruptcies and victims of domestic violence.

Refo said that “twin evils of racism and unconscious bias” have curtailed the progress of Black Americans.

“President Martinez has led us through a year that is going to go into the history books,” Refo said.

ABA President-elect Reginald M. Turner has spent the past few months comparing the stress of the COVID-19 pandemic, calls for police reform and resulting unrest to the anxiety he experienced during the 1967 Detroit riot, he told the House of Delegates during its final session.

His father was a police officer who was “on duty for 24 hours a day for what seemed like an eternity” during the 1967 riot, he said.

He saw tanks roll down his street as police and the National Guard tried to restore order, and he smelled the smoke of fires burning in the city from his front porch.

Turner, now an executive committee member of Detroit-based Clark Hill, also recalled telling his father he wanted to be a police officer. He said his father told him he’d prefer that he become a lawyer.

Turner told the House that the “most respected lawyers distinguish themselves by breathing life into the lawyer’s oath.

“With the powerful words of the oath, we pledge to support the constitutions of our nation and state; to respect our courts and judges; and to practice law with integrity, civility and concern for both paying and pro bono clients.”

Turner will serve his year as president from the close of the 2021 annual meeting, scheduled to be held in Toronto, through the 2022 annual meeting in Chicago.

This story was originally published in the October-November 2020 issue of the ABA Journal under the headline: “‘The Two Pandemics Facing America’: ABA leaders vow to fight effects of racism and COVID-19”