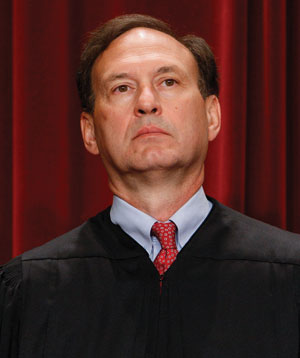 A crowd of several hundred people gathered in the auditorium of the National Archives building in Washington, D.C., last fall to hear a conversation with a member of the U.S. Supreme Court who usually remains far from the limelight.

Justice Samuel A. Alito Jr., who was approaching his 10th anniversary on the high court, recounted a story he likes to tell about attending a speech with his wife, Martha-Ann. They went to hear a judicial colleague talk about the Volstead Act, the federal law that implemented Prohibition.

After the event, “we got in the car and started to drive away, and my wife said, ‘That was a very boring speech,’ ” Alito told the crowd. He agreed with her, but explained that there were many subjects that active members of the judiciary must avoid.

At the archives, Alito told the story in a way that suggests he not only agrees with his wife but is also fine with the idea of judges being perfectly boring in public. Yet in more than 90 minutes of being interviewed by Akhil Reed Amar, a liberal law professor at Yale Law School, Alito won over the crowd with his understated sense of humor and his modesty.

Amar, a former law clerk to Justice Stephen G. Breyer, has interviewed other justices in his wide-ranging, nonconfrontational style. Speaking at the Oct. 29 event, he called Alito “a hard nut …to crack,” and he told the justice, “I’ve been trying to draw you out.”

Alito may not be the most self-reflective justice, but in his 10 years on the court—he took his seat on Jan. 31, 2006—the 65-year-old New Jersey native has quietly helped move the court rightward on issues such as race in K-12 education, abortion rights, campaign finance, voting rights and religious accommodation. On some of those issues, Alito’s vote was a switch from how his predecessor, Justice Sandra Day O’Connor, had voted in related cases. (So much so that O’Connor publicly expressed her exasperation in 2010 that her legacy had been partially “dismantled.”)

“Justice Alito has shown himself to be a reliable, consistent, principled ‘judicial conservative,’ in the sense of staying reliably close to the text, structure and historical evidence of the original meaning of the Constitution and striving to interpret and apply statutes in accordance with the words actually used by Congress,” says Michael Stokes Paulsen, a professor at the University of St. Thomas School of Law in Minneapolis.

Paulsen, who was an intern in the U.S. solicitor general’s office in the 1980s when Alito was an assistant solicitor general, repeated an observation he had written earlier about the justice: “There are flashier stylists, purer purists, wittier wits and more poisonous pens, but in terms of consistency of methodology and results, there is probably no conservative on the court with a better record than Alito.”

Erwin Chemerinsky, law school dean at the University of California at Irvine, says Alito “has been every bit as conservative as conservatives could have dreamed—and as liberals would have feared.”

He notes that there have been at least a few instances in which Chief Justice John G. Roberts Jr., who joined the high court four months ahead of Alito, has disappointed conservatives, notably in the Affordable Care Act cases.

“But I can’t think of an instance in which Alito has surprised,” says Chemerinsky, a board member of the liberal American Constitution Society and regular contributor to ABAJournal.com.

While the chief justice has spurned any contact with the Federalist Society, the conservative counterpart of the ACS, Alito has spoken frequently to the group and its affiliates. That includes a Texas event last September in which, according to one report, Alito reflected on his tenure and seemed to take some pleasure in the failed effort by Senate Democrats to filibuster his confirmation in 2006.

Josh Blackman, an associate professor at South Texas College of Law in Houston, attended the Sept. 19 Federalist Society Texas Chapters Conference in Dallas. The event was held at the institute of the president who appointed Alito to the Supreme Court, George W. Bush. Blackman posted a detailed account of the event, which included Alito dishing on some of the big cases of his tenure, including those in which he was in the majority and in dissent.

Blackman, a libertarian, said Alito seemed to relish appearances before conservative and libertarian crowds such as those attending Federalist Society events. “This is a crowd that will appreciate the constitutional perspective that he brings to the job,” Blackman says. “That may not be the case when he speaks at a law school.”

Christopher J. Paolella, a partner with Reich & Paolella in New York City, clerked for Alito both on the 3rd U.S. Circuit Court of Appeals at Philadelphia and, some years later, for the justice’s roughly half-term in 2006 and the first full term that followed.

Paolella notes that both he and Michael S. Lee, one of Alito’s other first Supreme Court clerks who had also served him on the 3rd Circuit, were well above the typical age of law clerks. “We were the world’s oldest chamber of clerks,” he said. Having familiar clerks with such experience can be particularly helpful for a justice joining the court in the middle of a term.

Paolella says that Alito has approached the job of Supreme Court justice the same way he did his job on the 3rd Circuit for 15 years. “He’s never had any ambition to make policy,” Paolella says. “He is a very humble judge.”

Alito hinted at that idea at the National Archives event when he was asked by Amar about whether the Supreme Court—currently composed of eight former federal appeals court judges—might benefit from someone with experience in elective office. (O’Connor, a former Arizona state legislator, was the last justice to bring such experience.)

“I don’t really know whether that would be beneficial or not,” Alito said. “I do know this, though: That if someone who has been a legislator is appointed to a court, that person, I think, has to flip a little switch … and say, ‘I’m not a lawmaker anymore. I’m now a judge,’ and that’s a different role.”

Amar was smart enough to know that it never hurts to get Alito talking about baseball. The justice, who grew up in Trenton, New Jersey, chose the Philadelphia Phillies as his team as a youngster and once attended a Phillies fantasy camp.

Amar asked about the comparison of Supreme Court justices to baseball umpires, clearly cognizant of Chief Justice Roberts’ assertion at his 2005 confirmation hearing that judges are mere impartial arbiters of balls and strikes.

“If we were like a stereotyped idea of what umpires do,” Alito said, then Supreme Court nominations would not be as controversial as they are, since “a lot of people believe we decide very important issues, and the way those issues are decided is heavily dependent on who is on the Supreme Court rather than what is in the Constitution.”

“But the truth of the matter is there is a lot more discretion involved in being an umpire than you might think,” Alito added, as he delved into some of the wiggle room that exists in baseball’s rules on checked swings, the strike zone and the infield-fly rule.

“A lot of people think that it is very mechanical, and that eventually umpires can be replaced by machines, and maybe they will,” Alito said. “But it is interesting to think about how much judgment goes into being an umpire.”

This article originally appeared in the February 2016 issue of the ABA Journal with this headline: “Alito’s First Decade: The justice is ‘every bit as conservative as conservatives could have dreamed—and as liberals would have feared’.”