After Scalia: The Supreme Court goes back to work amid uncertainty 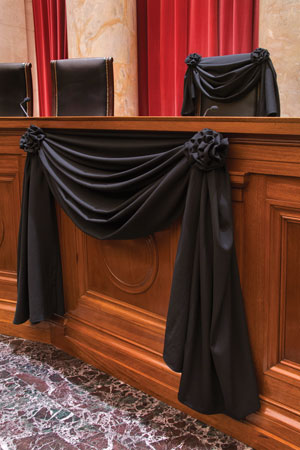 Supreme Court Justice Antonin Scalia’s courtroom chair and bench are draped in black to mark his death as part of a tradition that dates to the 19th century. AP Photo.

Antonin Scalia was a force on the Supreme Court for nearly 30 years, both for his conservative judicial outlook and his sheer strength of personality. His unexpected death on Feb. 13 at a ranch resort in Texas has plunged the court into a period of uncertainty—one that could last well into the next term.

Over the longer run, Scalia’s successor will have the chance to reshape the court, either solidifying the rightward trend of the past three decades or steering the court back to the left on many issues.

“This isn’t just another vacancy,” says Shannen W. Coffin, a partner with Steptoe & Johnson in Washington, D.C., and a former counsel to Vice President Dick Cheney. “The future of the court hangs in the balance.”

Carrie Severino, chief counsel and policy director with the Judicial Crisis Network in Washington and a former law clerk to Justice Clarence Thomas, put it more bluntly: “This is for all the marbles.”

As of the deadline for this article, Senate Republicans were steadfast that they had no intention of giving a hearing or vote to whomever President Barack Obama were to nominate for the court. But the president indicated he planned to put forth a nominee.

While that battle plays out between the executive and legislative branches, the Supreme Court has jumped back into its busy term with eight justices.

Justice Samuel A. Alito Jr. told an audience at Georgetown University Law Center on Feb. 23 that Justice Scalia’s death came as a shock to his colleagues. But as for the prospect of an eight-member court for the foreseeable future, he said, “We will deal with it.”

Justice Stephen G. Breyer, speaking two days later to an audience at the Newseum in Washington, said, “We will do our work.”

Breyer pointed to statistics about the court’s caseload indicating that a relatively low proportion of cases are decided 5-4. He cited statistics from the 2013-14 court term, when out of 73 decided cases, just 10 (or 14 percent) were decided 5-4. And of those 10, Breyer said, only six had a lineup of what he called “the usual suspects.”

By that, he clearly meant the court’s conservative bloc of Chief Justice John G. Roberts Jr. and Justices Scalia, Thomas and Alito, being sometimes joined by Justice Anthony M. Kennedy to form the majority. That was the result in four of those six cases that term, with Kennedy joining the liberal bloc of Breyer and Justices Ruth Bader Ginsburg, Sonia Sotomayor and Elena Kagan in the other two.

But the 2013-14 term was one of unusual unanimity on the court, with two-thirds of cases being decided unanimously and a below average share of 5-4 cases, according to statistics compiled by SCOTUSblog. 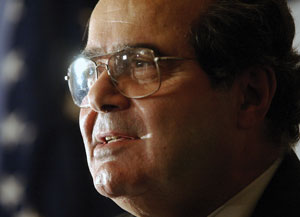 The very next year, in the 2014-15 term, unanimous decisions were back down to 41 percent. A 5-4 split was again reflected in just about one-quarter of decided cases. But this time, the usual-suspects split accounted for 13 of the 19 cases decided by that narrowest of margins.

“Ah, but those are the most important ones,” Breyer said, playfully suggesting that was an independent observation, not necessarily his.

This term, the “important cases” include pending ones from the fall or early this year for which Justice Scalia had participated in oral arguments—affirmative action in higher education, the meaning of “one person, one vote” in state and local elections, and mandatory fees for nonmembers of public-employee unions.

But with Scalia’s death, his tentative vote in the justices’ private conference can no longer be counted. Meanwhile, the court will have heard several more major cases by this spring—on abortion, religious objections to federally mandated insurance coverage of contraception, and Obama’s “deferred-action” immigration policies.

The court could deadlock 4-4 in any of those cases, as well as in others from its docket. (The affirmative action case, Fisher v. University of Texas at Austin, is an exception among the bigger cases, since Justice Kagan has been recused in that case. That leaves seven justices participating in that one.)

The court has three possibilities when it deadlocks in conference, says Erwin Chemerinsky, the dean of the law school at the University of California at Irvine and contributor to ABAJournal.com.

For cases heard by Scalia and for which he would have been a crucial vote, the justices could reassess whether they could come up with an opinion on narrow grounds. That is the least likely scenario, Chemerinsky says.

The second outcome is to leave the tie in place. In such cases, the court announces that the lower-court ruling before it is “affirmed by an equally divided court.” Such decisions carry no precedential effect for the nation or the high court.

In the days after Scalia’s death, there was much speculation about such an outcome for a case like Friedrichs v. California Teachers Association, about public-employee union fees. Oral arguments in the case had left many legal observers with the impression that Scalia was likely to side with the conservative bloc and strike down a 1977 precedent authorizing such fees, which would be a huge blow to the unions.

Terence J. Pell, the president of the Center for Individual Rights, a Washington group that represents nonunion teachers in California who brought the Friedrichs case, says a 4-4 affirmance in the case would be unacceptable—and not just because that outcome would mean a federal appeals court decision in favor of the teachers’ unions would stand.

“From our perspective, this is exactly the kind of case that should be held over,” Pell says, “because the country needs a decision.”

He called for the third option open to the court on a deadlocked case: ordering reargument in the future, when the bench returns to full strength.

Chemerinsky says the high court has the discretion to decide which deadlocked cases to order reargued and which to affirm without an opinion.”But,” he says, “the rules are murky on this.”

Writing in the Wall Street Journal after Scalia’s death, Josh Blackman, a professor at South Texas College of Law, and Ilya Shapiro, a senior fellow in constitutional studies at the libertarian Cato Institute, pointed out that the Supreme Court has often found itself short-handed because of a vacancy. While some eight-member courts have existed for extended periods because of the death or incapacitation of a justice, others occur as a matter of course throughout any term because of, for example, a justice’s recusal.

Since World War II, the scholars said, there have been 15 extended periods when the court had eight justices, and “each time the court managed its docket without a hitch.”

When the justices split evenly on a case during those periods, it affirmed the lower court without an opinion in 25 cases and ordered reargument in 54. These include examples such as when Justice Robert H. Jackson took leave from the court in 1945 to serve as the chief prosecutor at the Nuremberg tribunals, the yearlong vacancy when Justice Abe Fortas resigned from the court in 1969, and the eight months from the retirement of Justice Lewis F. Powell Jr. in 1987 until the confirmation of Justice Kennedy to the seat after the divisive battle over the nomination of Judge Robert H. Bork.

In those instances, the court set a number of cases for reargument. The situation was a bit unusual when Justice Sandra Day O’Connor announced her retirement in 2005. After Chief Justice William H. Rehnquist died a few months later (and was succeeded by Roberts), O’Connor delayed her retirement until Alito joined the court in January 2006. In three cases heard by O’Connor in which her vote would presumably be the deciding one, the court heard rearguments when Alito joined the bench.

“Rather than making the judicial system grind to a halt, a Supreme Court vacancy merely delays rulings in a small number of cases,” observed Blackman and Shapiro.

Irving L. Gornstein, the executive director of the Supreme Court Institute at Georgetown law school, agreed that historical practice at the high court “cuts more for reargument” in deadlocked cases on an eight-member court.

“The court has certainly survived some periods in which it has been operating with eight justices,” says Gornstein, a former deputy U.S. solicitor general. Any delay in confirming a nominee “isn’t going to irreversibly hurt the court,” he adds, “but the longer it goes on, the more concerning it is.”

Gornstein notes that Chief Justice Roberts, as recently as a couple of weeks before Scalia’s death, has expressed concerns about public perceptions of the justices as Republican or Democratic, based on the party of the presidents who nominated them.

“I think the chief is certainly somebody who will find a way to make this court function as smoothly as possible,” Gornstein says. “I’m sure he will try to bring them together, and it will be up to each justice to decide whether to go along.”

This article originally appeared in the April 2016 issue of the ABA Journal with this headline: “After Scalia: The Supreme Court goes back to work amid uncertainty.”