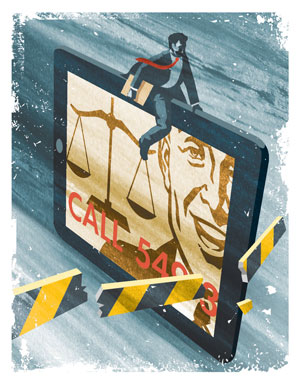 The Association of Professional Responsibility Lawyers is calling for a drastic streamlining of ethics rules governing lawyer advertising. APRL says the change would make it easier for attorneys to reach out to consumers without having to navigate a maze of regulatory barriers adopted by the states, despite rulings by the U.S. Supreme Court that lawyers have a constitutional right to communicate with the public.

“A new approach to regulating lawyer advertising is long overdue,” states a June 22 report by APRL’s Regulation of Lawyer Advertising Committee. “The committee’s fundamental premise is that the proper and constitutional purpose of regulating advertising is to assure that consumers of legal services receive factually accurate, nonmisleading information about available services.”

But instead, the report states, “the rules of professional conduct governing lawyer advertising in effect in most jurisdictions are outdated and unworkable in the current legal environment and fail to achieve their stated objectives. The trend toward greater regulation in response to diverse forms of electronic media advertising too often results in overly restrictive and inconsistent rules that are underenforced and, in some cases, constitutionally unsustainable under the Supreme Court’s Central Hudson test.

(In its 1980 decision in Central Hudson Gas & Electric Corp. v. Public Service Commission of New York, the high court articulated a four-part test for determining when, and to what extent, states may regulate commercial speech. The courts have applied the Central Hudson test to lawyer advertising.)

The committee asserts that “anticompetitive concerns—as well as First Amendment issues, globalization of the practice of law and rapid technology changes—compel a realignment of the balance between the professional responsibility rules and the constitutional right of lawyers to communicate with the public.”

The committee concludes in its report that “the practical and constitutional problems with current state regulation of lawyer advertising far exceed any perceived benefits associated with protecting the public or maintaining the integrity of the legal profession, and that a practical solution to these problems is best achieved by having a single rule that prohibits false and misleading communications about a lawyer or the lawyer’s services.”

The committee also recommends that disciplinary rules regarding lawyer advertising should be standardized nationally, and that complaints regarding lawyer advertising—which generally come from other lawyers rather than members of the public—should be handled through nondisciplinary means. Disciplinary actions should be confined to alleged violations of state equivalents of Rule 8.4(c) of the ABA Model Rules of Professional Conduct.

Model Rule 8.4(c) states that it is professional misconduct for lawyers to engage in conduct “involving dishonesty, fraud, deceit or misrepresentation.” (The Model Rules are the basis for binding ethics rules in every state, although California uses a different format.)

“All the rules should worry about is false and misleading advertising,” says Ronald D. Rotunda, a law professor at Chapman University in Orange, California, who served on the committee. “That protects consumers. The rest of the complex restrictions serve little useful purpose. Our empirical study showed that the problem is not how the lawyer designates himself or herself as an admiralty lawyer, or whether the lawyer uses email or text messages. To the extent there is any problem, it has to do with misleading speech. If the disciplinary authorities focused their limited resources in that area, clients would be better off.”

The APRL report recommends that the first step toward achieving that goal would be for the ABA to eliminate all but two of its current professional conduct rules that apply to lawyer advertising. Specifically, Model Rules 7.2 (Advertising), 7.4 (Communication of Fields of Practice and Specialization) and 7.5 (Firm Names and Letterhead) would be eliminated.

If the ABA takes the lead in streamlining its rules, the report suggests, the states are likely to follow. “A simple ‘false or misleading’ standard for lawyer communications about legal services best balances the important interests of access to justice, protection of the public and clients, integrity of the legal profession, and the uniform regulation of lawyer conduct,” the report states.

“Everything else is a footnote, and potentially overreaching, by blocking useful information to legal consumers,” says Johnson, a partner at Davis Wright Tremaine in Seattle who has represented social media websites in numerous lawsuits. “These detailed rules are also catnip for lawyers, an invitation for abuse. As our report showed, too many regulations inhibit competition. Most complaints about lawyer advertising come from other lawyers, not from consumers.”

The report makes no recommendations regarding Model Rule 7.3 (Solicitation of Clients). “There was a decision not to address the many and varied elements that are involved in that issue,” says Dennis A. Rendleman, a liaison to the APRL committee from the ABA Center for Professional Responsibility. Rendleman is counsel to the ABA Standing Committee on Ethics and Professional Responsibility, which issues formal opinions that interpret the Model Rules.

“The report is significant because it confirms that technology has thoroughly transformed the legal marketplace, and these changes will persist,” Johnson says. “The APRL report acknowledges what all of us know—that, with the growth of technology, American consumers now have access to a vast potpourri of information about lawyers. As a consequence, many old-fashioned restrictions governing the dissemination of information about legal services have become outmoded and, to the extent that they inhibit information that is neither false nor misleading, potentially dangerous to free speech rights.”

One key effect of the changes recommended in the report would be to largely eliminate a “potentially misleading” standard that is widely applied by state regulators in assessing lawyer advertising and other communications to potential clients.

“To say that something is ‘potentially misleading’ concedes ignorance about any actual harm,” says Johnson. “If no harm can be proved, what is the constitutional justification for government regulation of free speech? Where First Amendment interests are at stake, the Supreme Court has repeatedly held that ‘precision of regulation’ is the touchstone, and that truthful commercial speech cannot be penalized because it may be potentially misleading.”

There is some precedent in recent years for the ABA to revisit its rules relating to advertising and solicitation. Most recently, the Commission on Ethics 20/20—created in 2009 with the charge to consider how the Model Rules should be changed to accommodate advances in technology and globalization—gave those rules a hard look. Ultimately, however, the commission recommended relatively minor changes to Model Rules 7.2 and 7.3, which were adopted by the House of Delegates in 2012. Only a few states have incorporated the commission’s recommendations into their own ethics rules.

But members of the APRL committee hope its report will serve as a catalyst for consideration of possible further changes.

“The ABA, in recent years, has been in the forefront of reform of legal advertising rules,” Rotunda says. “Many states are behind the times, with very complex rules that do not protect clients but simply limit competition. Our study showed that the typical persons complaining to the disciplinary authorities about legal advertising are other lawyers, not clients.

“But the purpose of the rule is to protect clients, not competitors.”

This article originally appeared in the October 2015 issue of the ABA Journal with this headline: “All Aboard for Streamlining: Report calls for drastic change in ‘outdated and unworkable’ lawyer advertising rules.”