An App for That? 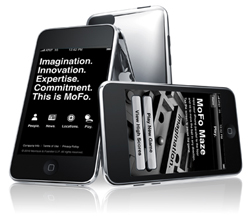 Lawyers have long used bus stops, websites, radio advertisements and brochures to market themselves. But an app for the iPhone?

San Francisco-based Morrison & Foerster thinks it’s a savvy marketing tool. After all, in this day of technology on the go, what better way is there to remain on people’s minds than by occupying valuable real estate on their most prized possession: their cellphone.

In March MoFo launched its free MoFo2Go app, becoming the first U.S. law firm to have a multifunctional app, according to its spokeswoman. A Canadian firm beat it by a week or two, and a few other U.S. law firms have singular function apps, she says.

The brainchild behind MoFo2Go is 33-year-old partner Mika Mayer. Some critics have questioned the need for a law firm to have an app, but Mayer says it’s a worthwhile investment, costing about the same as a fancy brochure and providing useful information to clients and recruits.

In the first few weeks more than 700 people downloaded it, including firm clients and lawyers. Clients have raved about how easy it makes communicating with the firm, Mayer says.

MoFo2Go has four functions, three of which are “people,” “news” and “locations.” The fourth is “play.”

“I thought a game on there would show we are hip,” says Mayer, who hopes it will give people a reason to keep the app. So far the game—a maze—has proved challenging.

“I’m only aware of one attorney in the whole firm who can solve the entire game,” she says.

It remains to be seen whether that helps on the partner track.