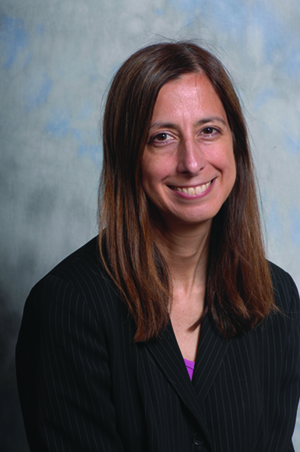 Mary Smith is believed to be the first female Native American president-elect nominee of the ABA. Photo courtesy of the Chicago Bar Association.

Mary Smith asks herself the same two questions any time she considers a new opportunity: “Am I the right person for this role?” and “Can I make a difference?”

She didn’t join or become active in the ABA thinking she would one day be the association’s president. But she began to contemplate the possibility while serving as its secretary, a position she held from 2017-2020.

“I believe the ABA really helps lawyers with their practice, and it helps with rule of law issues and promoting democracy and promoting diversity, equity and inclusion, and I care about all of those things,” Smith says. “I wanted to do more, thought about it and decided yes, I wanted to try to serve in that role and really try to use the experiences I have had in my career to help the legal profession.”

Smith, vice chair and partner at the Veng Group in Chicago, was selected as the ABA’s next president-elect nominee by the House of Delegates Nominating Committee at the ABA Midyear Meeting in February. She will face an uncontested vote by the full House at the ABA Annual Meeting in Chicago in August, after which she is virtually assured to become the president-elect.

Deborah Enix-Ross is the current president-elect and will begin her one-year term as president at the close of the annual meeting. Enix-Ross would pass the gavel to Smith after the 2023 ABA Annual Meeting in Denver.

Smith believes strongly in consistent leadership, and she plans to do whatever she can to help Enix-Ross and the association as president-elect. She says she will let the ABA’s mission—“to serve equally our members, our profession and the public by defending liberty and delivering justice as the national representative of the legal profession”—and goals guide her work.

“No. 1 is to serve our members,” Smith says. “I want to help law students establish their practice, help young lawyers become better lawyers and help lawyers who are in the thick of their career or later in their career. That’s my North Star and the association’s North Star.”

Smith, an enrolled member of the Cherokee Nation, is the first female Native American president-elect nominee of the ABA.

She grew up in Chicago and didn’t immediately gravitate to law because she didn’t know any lawyers. She enjoyed math and science just as much as English. She majored in mathematics and computer science at Loyola University Chicago, and after graduating in 1984, she worked as a systems programmer.

“I like problem-solving. I like helping people. But after a while, I thought there were other parts of me that I could use to help people that weren’t being utilized when I was helping them solely with computer problems,” Smith says. “I felt that through going to law school, I would be able to help people in broader and more profound ways.”

Smith, a 1991 graduate of the University of Chicago Law School, has since had what she calls an eclectic legal career.

She has worked in private practice at Skadden, Arps, Slate, Meagher & Flom and at what is now Schoeman Updike Kaufman & Gerber. She has experience in government, serving in roles that include general counsel in the Illinois Department of Insurance and counselor in the U.S. Department of Justice’s Civil Division. She also has been senior litigation counsel for Fortune Global 200 company Tyco International.

Smith points to two other experiences, however, that were particularly meaningful to her.

In 2015, she became principal deputy director of the Indian Health Service, an agency within the U.S. Department of Health and Human Services that is responsible for providing federal health services to more than 2.5 million American Indians and Alaska Natives.

Her grandmother, who was Native American, grew up in Westville, Oklahoma. There were 16 children in her family, but only 10 lived to be older than 3 because of the health care available at the time.

The other highlight for Smith was working in the White House from 1997 to 2001, serving as associate counsel to the president and as associate director of policy planning for the Domestic Policy Council.

She handled policy and legal issues involving Native Americans, homelessness and violence against women. As a result, she found herself connecting to the ABA in a new way.

Smith joined the ABA during law school but didn’t become active in the organization until after her time in the White House.

“I like working on rule of law issues and civil rights issues and human rights issues, and I worked on a lot of those issues when I was in the White House,” she says. “Frankly, outside of being in government, one of the most uniquely positioned places you can do that type of work if that’s not your practice area is in the ABA.”

Smith recounts several positive experiences with the association. Along with serving as secretary, she was on the Board of Governors for seven years. She was a member of the House of Delegates and has been active in the Commission on Women in the Profession, the Section of Litigation, and what is now the Section of Civil Rights and Social Justice.

She has helped draft resolutions considered by the House of Delegates, including a measure adopted at the midyear meeting in 2020 that urged all governments to “acknowledge and prioritize responding to the Missing and Murdered Indigenous Women (MMIW) crisis.”

The impetus was a trip then-ABA President Judy Perry Martinez and Smith took to visit the Coushatta Tribe in southern Louisiana the previous December. After hearing about the MMIW crisis, Smith asked two young members of the Section of Civil Rights and Social Justice’s Native American Concerns Committee to draft a resolution.

“Within two months of Judy’s trip, we had ABA policy on missing and murdered Indigenous women,” Smith says. “There were two pending legislations in Congress that passed later that year, and I’m sure many people were weighing in, but the ABA was able to have a voice on that.”

In addition to policy issues, Smith has worked on programming for the ABA. One that stood out was a special Veterans Day program in November that featured Louis Moore, a 99-year-old World War II veteran who wrote the book Eternal Love about his wife, Nellie, and their life together.

Smith, whose father was also a World War II veteran, was one of the moderators. At the end of the program, they awarded Moore, a Chinese American who had faced discrimination, the Congressional Gold Medal.

When Smith considers the work ahead, she says she also wants to focus on helping the ABA move closer to its goal of eliminating bias and enhancing diversity.

“It’s been a passion of mine throughout my career,” she says. “I want any young person, no matter their race, religion, gender identity, to say, ‘Yes, I can be a lawyer, I can do whatever I want.’ I think whether you want to be a practicing lawyer or use your law degree in public service or elected office or other ways, the law opens those doors.”

This story was originally published in the June/July 2022 issue of the ABA Journal under the headline: “Leading the Way: As ABA president-elect nominee, Mary Smith says her North Star is member service.”