At this Prosecutor's Office, a Furry Soft Spot for Kids 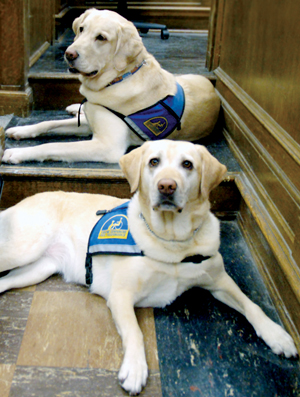 Unconditional love, sad to say, isn’t what brings children to the offices of the King County Special Assault Unit.

Yet that’s what they encounter there, thanks to resident therapy dogs Ellie (front) and Jeeter.

As unofficial employees of the office, they assist abused children throughout the entire legal process, standing by them during the initial forensic interview, sitting patiently with them in trial and even accompanying them into the witness box as they testify.

The dogs have become a fixture in the 240-lawyer King County Prosecuting Attorney’s Office thanks to the enthusiasm of Norm Maleng, who headed the office un­til his sudden death in late May. Staffers have started raising money to train a puppy as a service dog in his honor.

The program started nearly four years ago when deputy prosecutor Ellen O’Neill-Stephens began bringing Jeeter to work with her one day a week.

Jeeter was not only part of her family; he was a skilled and certified companion animal for her disabled son, Sean. On the days Sean spent with a caregiver, O’Neill-Stephens brought Jeeter to hang out with her in juvenile drug court rather than leave him home alone.

Jeeter’s life changed when a fellow prosecutor asked if the service dog could help calm twin girls who were scheduled to testify against their father in an emotionally charged sexual abuse case.

“During cross-examination the kids and the defense attorney were stroking Jeeter,” recalls O’Neill-Stephens. “It was just people having a conversation around a dog, and it worked for everyone.”

Jeeter made such a difference, in fact, that the office decided to bring on an additional therapy dog who could work “full time.” Enter Ellie—who, when she joined the juvenile department in January 2005, became the nation’s first service dog matched with a prosecutor’s office, according to Canine Companions for Independence, the nonprofit that trained both dogs.

“She is the most incredible dog. She picks up on people’s emotions,” raves Page Ulrey, the SAU prosecutor who is responsible for Ellie’s care on and off the job. “If there’s a child who’s more needy, she’ll respond in kind.”

Tirelessly good-natured, the dogs spark pleasant feelings throughout the courthouse, “from the defense attorneys to the metal detector guys,” says O’Neill-Stephens. And Ulrey says they even soothe tensions in the oft-anxious prosecutor’s office.

So far only one other prosecutor’s office is using service dogs—Snohomish County, just north of King County. But that might change soon. O’Neill-Stephens has put together a DVD as well as a presentation showing how the dogs help children in SAU interviews. “It’s starting to catch on in terms of being a very effective tool, not only for witnesses but for everyone else in the system,” O’Neill-Stephens says.