Winning short story: 'The Attorney Helped Clean Up The Blood' 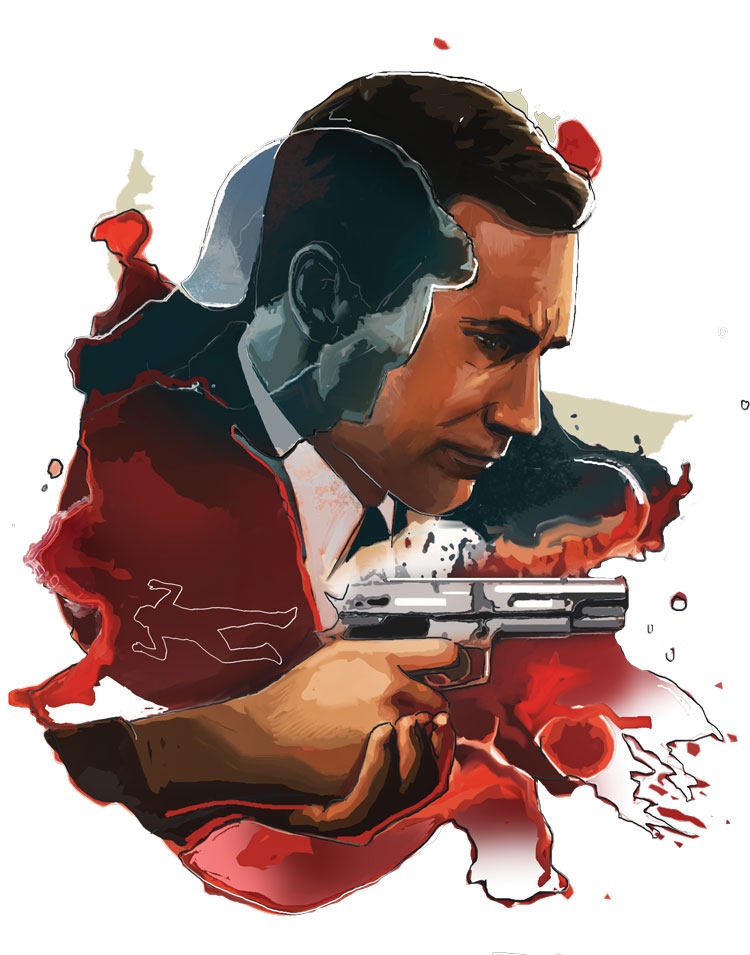 The attorney helped clean up the blood. It wasn’t in his job description—that was for sure—but Neil Blastman felt somehow responsible. It was his fault that the kid had gotten a permit to carry. It was his advice that sent the boy to that lowlife gun shop that didn’t care if the kid had been in a psychiatric hospital, didn’t care that he went to a wilderness camp because he couldn’t control himself in school, didn’t care that the 22-year-old had some anger issues that sometimes boiled over in unexpected ways.

Blastman always knew what he wanted to be: a lawyer, living outside of any city, defending good country people who maybe did bad things, maybe not. Neil Blastman wanted to uphold the law, sure, but he also just wanted to help human beings.

Neil Blastman was just that kind of guy. He cared. He cared too damn much.

It all started when he was 12. He read To Kill a Mockingbird, and he became obsessed. Atticus Finch was his hero.

His brother Joseph became a mechanic: greasy hands, black under his nails, callouses. But in a way, Neil was a mechanic, too. He was a mechanic of the legal system, driving and fine-tuning the engine, making certain the gears didn’t grind.

Neil’s hands were clean (he’d never admit it to anyone, but sometimes he actually had a manicure). His nails were free of dirt; his palms smooth.

He did have callouses, though—on his heart. This business was not for the weak.

Neil liked to think of himself as a hero and a statesman, a patriot and a man of the people. He worked pro bono sometimes, and he volunteered for good causes. Public interest was his heartbeat.

Neil was a guardian of civilization, just like those amazing attorneys over in Pakistan who locked arms in the streets and were carried off by cops. They were acting in defiance of the president’s suspension of their constitution.

Blastman loved the U.S. Constitution. He knew it by heart, and he could say it word for word, if anyone ever asked him.

But nobody ever did.

Read more about the winning story.

His brother liked to ask questions, though. “What do you do all day?” and “Don’t you get tired of argument as your job?”

Joseph’s favorite question was “What exactly is a lawyer, anyway? Isn’t it kind of like being a crook who gets paid really good?”

Neil knew that his brother was only trying to rile him. Even though they were both in their 50s, they still behaved like kids sometimes.

“I do four things,” Neil always said. He rubbed his bald head as if it were a Magic 8 Ball. “One: I protect people from harm. Two: I work for the common good. Three: I settle disputes. Four: I encourage and persuade people to do the right thing. It’s simple. Four things.”

Joseph spit out his chew, a steady stream of brown liquid that spurted to the ground between them.

“Shoot,” he said. “I do a lot more than that in the first five minutes of my day.”

Joseph and Neil grew up watching all those old Westerns, Gunsmoke and Bonanza and Have Gun—Will Travel. They played cowboys and Indians; they had toy rifles. When they were 12, they each got a real shotgun, a hunting rifle. They learned gun safety, and they ate what they shot.

“Remember the squirrel pot pie?” they asked one another, reminiscing about life in Pennsylvania in the good old days. “How about that rabbit stew Mom used to make?”

Mom was a single mother who raised them on two jobs. She’d be proud, of both of them. She took them on vacations to Atlantic City, bought new shoes and school clothes each September. She joined the community pool so that they could swim while she worked; she signed them up for Boy Scouts. And she made sure they had guns. After all, boys of single moms had to help provide for the family.

Or death, as it turned out.

He first met the kid Tim on a day in September. Neil remembered it was a sunny day, autumnlike, leaves falling in a gentle and relaxing kind of way. Neil was mowing his yard (the grass was still green). Neil always took great care of his lawn: manicured and immaculate like a rich lady’s hands. (Neil had won a lawsuit for a guy once, in complaint of a neighbor’s overgrown lawn that attracted all kinds of varmints.)

Neil was humming some old Pink Floyd song, maybe Wish You Were Here, probably thinking about Mom. She’d died in August, taking her last breath in the home where they’d grown. Neil found her when he stopped in with the Sunday paper and a bag of whole-bean Starbucks. Mom always liked the sound and smell of coffee grinding away on a lazy Sunday morning. She deserved it; all those years of hard work in Kmart and Turkey Hill just to raise her two boys.

Neil stopped at the edge of the yard that day to swab the sweat from his face. He stood where lawn met road, and he surveyed his work. Perfect. His house, his lawn; they could be a spread in “Home Beautiful.” If only he had a wife to go along with all this perfection he’d created. Doesn’t every American woman aspire to marry an attorney?That’s what Neil had always heard.

But then again, you certainly couldn’t believe every word you ever heard. That’s what Neil Blastman knew.