Banks face a slew of suits over their ADA-violating ATMs 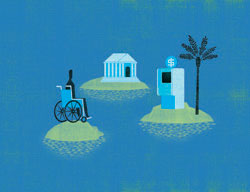 A litigation trend has banks facing a spate of class actions related to Title III of the Americans with Disabilities Act.

A 2010 update to the law required that automated teller machines be speech-enabled and have tactile instructions by 2012. More than 100 class actions were filed by visually impaired plaintiffs in federal district courts throughout the U.S., alleging that ATMs remained inaccessible.

In many cases, failure to comply was due to manufacturer backlogs for upgraded machines and prohibitive costs (about $30,000 per ATM) for smaller banks. Litigation was effective in forcing compliance, says Pittsburgh-based class attorney R. Bruce Carlson. Cases were filed as class actions to pre-empt the primary defense: That a plaintiff wasn’t in the same community as a nonaccessible ATM.

ADA litigation “has served a world of good,” agrees Petrakis, who’s defending the new cases. “These are real issues at stake. But sometimes there are abuses or stretches of the law and the way it’s applied. Plus, it’s a fee-shifting statute because the majority of settlements are just for attorney fees.”

Zeroing in on banks was driven by the advocacy community, Carlson notes. “Noncompliance is so pervasive among many sectors. But for disabled consumers, the ability to interact with institutions like banks represents financial independence.”

This article originally appeared in the June 2014 issue of the ABA Journal with this headline: “Noncompliance: Banks face a slew of suits over their ATMs.”