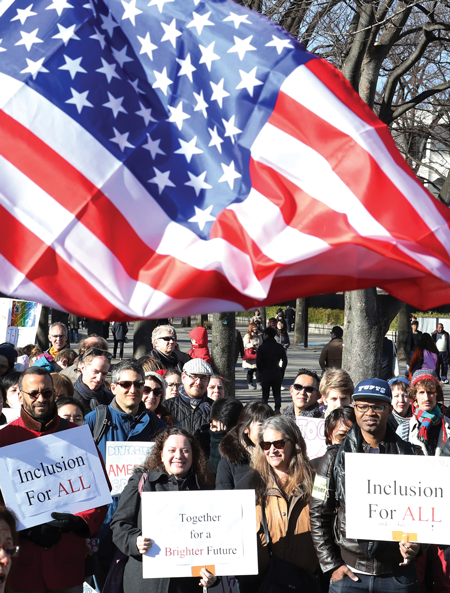 President Donald Trump’s executive order seeking to restrict immigration from seven Muslim countries was part of a disturbing trend that didn’t surprise members of minority bar associations already prepping for court battles to come. Even before the “Muslim ban,” affinity bars were marshaling resources and teaming up to fight a reported increase in racism, bigotry, xenophobia, harassment and hate crimes.

Among those leading the effort is Cyndie M. Chang, president of the National Asian Pacific American Bar Association and managing partner of the Los Angeles office of Duane Morris.

Chang, an attorney who specializes in business litigation, was recently the victim of a racist taunt.

“I was standing on the steps of the U.S. Capitol, and a Caucasian man told me to go back to my own country,” says Chang, whose family has lived in the United States for five generations.

“I’m an Asian-American female, so this is not the first time it happened to me,” she says. “If you’re a person of color like me, you’ve probably had racist experiences. It’s common.”

But the upsurge in racism and bigotry has become an issue of increasing concern in the current political climate. As a result, Chang’s group and others are taking on proactive roles.

“To provide our membership and the greater Asian-American community with resources to help victims of racism and hate crimes, our organization has created a toolkit of hate-crime resources for attorneys and bar associations developed over a period of months,” she says.

The toolkit contains a comprehensive definition of hate crimes, information on how to report one, sources of pro bono legal services and community education, statements from other bar associations, and additional resources.

The ABA itself has spoken out about Trump’s immigration order and his attacks on judges. (See “Taking on Trump.”)

Chang’s bar association, with a membership of about 56,000, also is working with other minority bar associations to educate as well as combat racism and hate crimes.

Vichal Kumar, president of the South Asian Bar Association of North America and managing attorney for the civil defense practice of the Neighborhood Defender Service of Harlem, says his organization also has provided resources for how to report hate crimes and information on immigration rights.

“Lawyers have asked for this,” says Kumar, whose organization has 26 chapters and about 7,500 members. “We also work with other bar associations and with community organizations to protect the greater Southeast Asian community.”

SABA North America formed in the wake of the 2001 attacks on the World Trade Center, in response to an increase in anti-Muslim rhetoric and bigotry.

Kumar thinks the recent uptick in incidents might be attributable to the 2016 presidential campaign and social media. The Department of Justice reported a 67 percent increase in hate crimes committed against Muslim-Americans in 2015 (the latest figures available).

“Maybe the DOJ is doing a better job of tracking hate crimes; maybe people are just more aware of them,” Kumar says.

The Southern Poverty Law Center says at least 700 “hateful incidents of harassment around the country” against immigrants were reported during the week after the presidential election. And as the legality of Trump’s executive order on refugees winds its way through the court system, minority bar associations have pledged to continue their fight against racism, xenophobia and hate crimes.

“Because of the increase in racism and bigotry, it’s been challenging at times,” Kumar says. “But by and large, Muslims are optimistic here because of what the country offers—freedom, opportunity and hope.”

This article originally appeared in the April 2017 issue of the ABA Journal with this headline: "Concerned Bar Groups Step Up: Rise in hate crimes and divisive rhetoric prompts action."