Bigoted attacks must be met with stronger protections 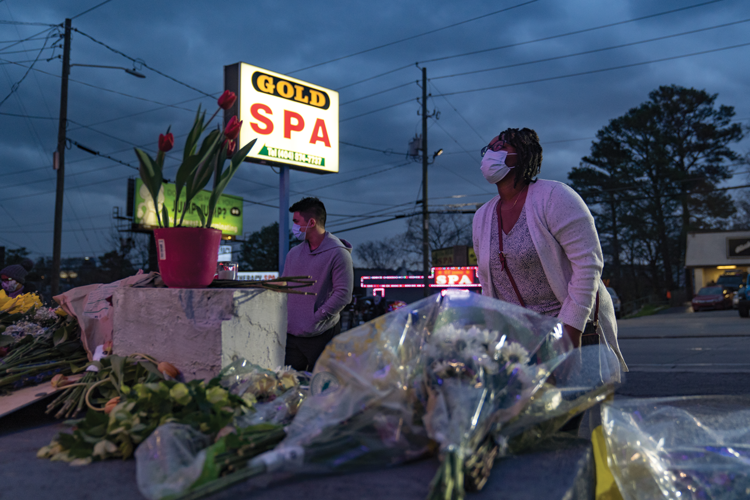 Mourners bring flowers to the memorial set up outside of the Gold Spa in Atlanta. Photo by Megan Varner/Getty Images

The rise in hate crimes against Asian Americans in recent years shouldn’t come as a shock. A long history of discrimination and racial prejudice piled the kindle; incendiary political rhetoric lit the fire. So now, in the wake of the March 16 mass killing of six Asian American women in the Atlanta area, an acknowledgment of the terror perpetrated against this community has become part of our national reckoning.

Police charged Robert Aaron Long with eight counts of murder in the attack, which catalyzed a movement to address harassment and bias incidents against Asian Americans. Hate crimes against this ethnic group rose about 150% in major U.S. cities last year, an underreported fact that is now front and center.

As often happens with communities of color, there was an invisibility to the victims until a moment in time when something truly horrific happened and captured the national conversation.

The Atlanta slayings were that call to action. The national spotlight has turned to the causes and prevention of attacks on Asian Americans. Some politicians who aggressively blamed China for the coronavirus pandemic encouraged xenophobia. President Donald Trump referred to COVID-19 as the “China virus” and the “kung flu,” further stigmatizing Asian Americans. These dog whistles are just the latest in our long and troubling history of disease racialization and minority scapegoating that too often ends with targets on backs.

For a variety of reasons, including voluntary reporting and a lack of police training or acknowledgment of bias incidents, tracking hate crimes is challenging and imperfect. There were 122 incidents of anti-Asian American hate crimes in 16 of the country’s most populous cities in 2020, according to data compiled by the Center for the Study of Hate and Extremism at California State University, San Bernardino.

The group Stop AAPI Hate received reports of 3,795 hate incidents over a period of nearly 12 months since the pandemic began. And a Pew Research Center survey found that 31% of Asian Americans had been subjected to racial slurs or jokes in the same time period. 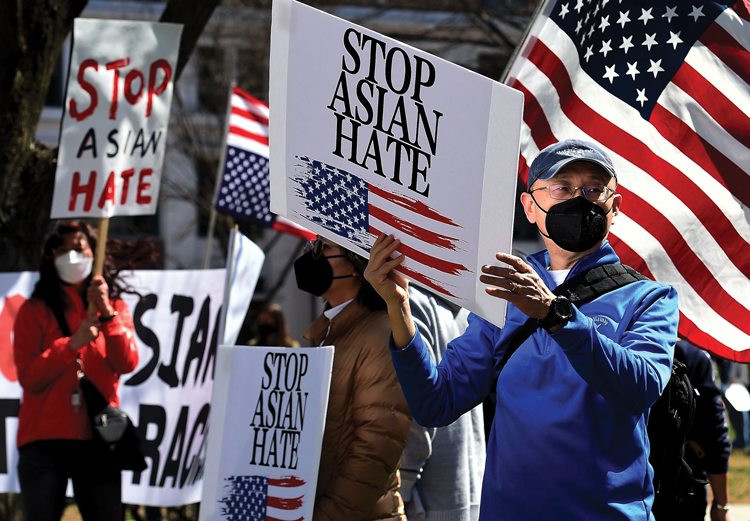 Authorities often downplay or fail to acknowledge killings within communities of color as acts of terrorism or label them hate crimes, particularly when the perpetrator is white. This racial blind spot does nothing to alleviate ongoing concerns about bias within police ranks.

During a press conference, a Cherokee County Sheriff’s Office spokesman said Long told police vengeance for his “sex addiction” was the motive for the shootings, not race. Capt. Jay Baker also noted the killings were a result of Long having “a really bad day” and wanting to eliminate temptation, a bizarre statement that sounded dangerously close to victim-blaming. And Long’s “bad day” can’t compare to the devastation experienced by his victims and their families.

Fulton County prosecutors have indicated they plan to seek hate crime charges against Long. But a police spokesperson downplaying the likelihood of racial animus isn’t a stretch. It reflects the reluctance of law enforcement to paint perpetrators with the scarlet R—racism as a motivation for a crime—absent a noose or a swastika or racist screeds uncovered online. This country has long preferred to view itself through the rose-colored lens of a post-racial society, even when that hue is from crosses burning in the background. According to FBI hate crime-tracking records, over 80% of participating jurisdictions reported zero bias incidents in their cities every year since 1996, a statistic that strains credulity.

The truth is, there can be multiple factors prompting an attack—mental illness, bigotry, misogyny, rage. Motives are not mutually exclusive. It’s also true that hate crimes are extraordinarily difficult to prosecute because they require proving the defendant’s bias was one of the primary reasons for committing the criminal act. This creates an unwieldy burden of proof.

Despite this fact, in a rare demonstration of bipartisanship, the U.S. Senate in April passed a hate crimes bill addressing the rise in attacks against Asian Americans. Among other things, the bill creates a Justice Department position focused on the issue and improves data collection and reporting requirements. At press time, the House was set to vote on the bill the week of May 17.

But not everyone wants to expand hate crime laws and increase criminal penalties, because they view it as another extension of the carceral state. Some argue that these laws would allocate more funding and power to police—controverting the current movement to limit overpolicing. Most hate crime laws enhance sentences for crimes that already carry significant penalties instead of creating new offenses that might not otherwise be prosecuted. And they are often erratically applied, when charges are brought at all. In addition, a hate crime charge could make a straightforward case more complex and harder to win.

Some advocates say resources that would be diverted to training and equipping law enforcement to target and track hate crimes could go toward public education, prevention services and grants to assist targeted communities in other ways.

But even if a hate crime designation is more symbolic than anything else, there is power in calling things what they are. Though these laws are imperfect, they are a means of calling out bias-based attacks and showing members of a community that their concerns are being taken seriously. Yes, there should be a reevaluation of how hate crime laws are constructed, the range of offenses they target and opportunities for alternative punishments that include bias-elimination education and resources for community services. But hate crime laws are important: They send a message to targeted communities that the justice system has their back, and they let perpetrators know there is a steep price to pay for bigoted attacks.

This story was originally published in the June/July 2021 issue of the ABA Journal under the headline: “Targeting Hate: Bigoted attacks must be met with stronger protections.”