Bipartisan push is on for sentencing reform 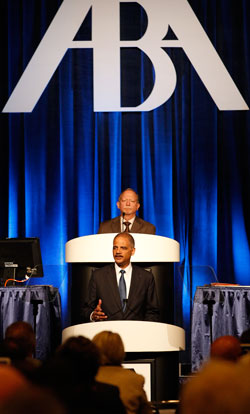 Attorney General Eric Holder told the ABA: “It is well past time to implement … changes.” Photo by Tony Avelar.

As the federal prison population and costs rise at an alarming rate, there is a bipartisan push in Congress to enact legislation calling for smarter sentencing procedures.

The numbers are staggering. Since 1980, the federal prison population has increased by close to 800 percent—from 25,000 to more than 219,000. And annual U.S. Bureau of Prisons spending has soared to approximately $6.9 billion—now more than 25 percent of the entire U.S. Department of Justice budget and projected to make up 40 percent of its budget by 2022. Increasingly, the DOJ is being required to cut funding for other critical priorities to fund prison growth.

Some facilities are operating at 39 percent over capacity, and individuals convicted of drug offenses make up close to 50 percent of the prison population. Recent research by the Urban Institute revealed that mandatory minimum sentences, particularly for drug crimes, are a major contributor to the growing federal prison population.

These statistics, according to the ABA, illustrate the need to move away from rote “tough on crime” laws of the 1980s and focus more on evidence-based “smart on crime” policies.

U.S. Attorney General Eric H. Holder Jr. recognized the ABA’s long-standing efforts to reform the criminal justice system and end mandatory minimum sentences last August when he called the association a “driver of positive change” and asked the ABA to partner with the DOJ to take the bold steps necessary to reform and strengthen the system in concrete and fundamental ways.

Holder, speaking at the ABA Annual Meeting, unveiled Smart on Crime, a new strategy developed after a review revealed that many aspects of the criminal justice system may actually exacerbate the vicious cycle of poverty, criminality and incarceration that traps too many Americans and weakens too many communities.

“It is well past time to implement commonsense changes,” he said, “that will foster safer communities from coast to coast.”

• Prioritize prosecutions to focus on the most serious cases.

• “Surge” resources to violence prevention and protection of the most vulnerable populations.

The DOJ strategy and legislation pending in Congress include many of the recommendations adopted 10 years ago by the ABA after the association’s intensive one-year study of the criminal justice system, conducted at the request of U.S. Supreme Court Justice Anthony M. Kennedy.

One incremental approach to modernizing drug sentencing policy is the proposed Smarter Sentencing Act (S. 1410), a bipartisan proposal strongly supported by the ABA. The bill’s provisions—which the association maintains should be part of any criminal justice reform package—would expand the existing federal safety valve that allows a judge to sentence less than the mandatory minimum in appropriate cases, reduce mandatory minimums for drug offenses, and apply the Fair Sentencing Act of 2010—which reduces the sentencing disparity between crack and powder cocaine offenses—to those currently serving sentences for drug offenses who did not benefit from the change.

Crafting a criminal justice reform package, the Senate Judiciary Committee is considering S. 1410 with other proposals, including the Justice Safety Valve Act (S. 619), the Recidivism Reduction and Public Safety Act of 2013 (S. 1675) and the Federal Prison Reform Act (S. 1783).

The House Judiciary Committee took a major step last May when it appointed the Task Force on Overcriminalization, assigned to study and make recommendations for improving the criminal justice system.

Noting that a consensus on more careful use of criminal sanctions is emerging from the task force hearings, the ABA recently recommended that the task force be extended so it can examine more closely the overuse of mandatory minimums, the federalization of state criminal law, and the proliferation of collateral consequences. Attorney General Eric Holder told the ABA: “It is well past time to implement … changes.”

This article originally appeared in the February 2014 issue of the ABA Journal with this headline: “Getting Smarter on Sentencing: Bipartisan push is on for this criminal justice reform.”