Birth of a Nation: Find unclaimed land, and you can be king! 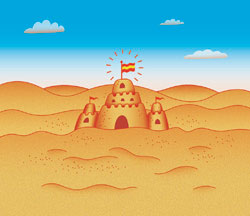 Given one wish, many people might go for something predictable, like winning a lottery jackpot or scoring the last jelly doughnut at the office. Some of us, though, might think really big and go for absolute power. Like have-your-own-country-with-no-one-to-answer-to kind of power. But short of fomenting a revolution in an established nation, it would entail, perhaps, staking out an unclaimed area somewhere on the globe and planting a flag.

Are there any unclaimed areas on Earth? It wouldn’t seem so, with countries laying claim to everything from ocean floors to islands to the Arctic Circle (and there’s even an effort underway to establish a U.S. national park on the moon!). But if you look hard enough, as Jeremiah Heaton did, you just might find some terra nullius—that’s legalese for “land that belongs to no one.” Such a place may be Bir Tawil.

Straddling the border between Egypt and Sudan and claimed by neither, Bir Tawil is an 800-square-mile expanse of mostly desert that Heaton of Abingdon, Virginia, came across online last winter. His daughter, Emily, then 6, had expressed an interest in being a princess, so he decided to find her a principality because, he was quoted as saying in a Washington Post article, “as a parent you sometimes go down paths you never thought you would.”

This particular path led him to request permission from Egypt to visit the site, where on June 16, Emily’s 7th birthday, he sank a homemade flag into terra firma and declared the territory would forever be known as the Kingdom of North Sudan, a sovereign monarchy. He declared himself head of state, with Emily as his princess. But is it really that simple? Of course not. Today, if you want to be recognized as a tin-pot despot, you have many legal hoops to jump through. (And, according to Slate, 14 “citizens” already claim Bir Tawil as theirs.)

Heaton might require a battery of lawyers to get his kingdom crowned by the United Nations and capture the attention of Rand McNally. First, he’ll have to submit a letter of application to the U.N. secretary-general. Then the recommendation for admission must be approved by nine of the 15 Security Council members, including all of the Big Five. Lastly, the recommendation is presented to the U.N. General Assembly, where a two-thirds majority is required.

Generously assuming he can clear those hurdles, Heaton will still have to address such niggling details as a government (a necessary evil), a constitution (without the rule of law he would be free to impose arbitrary bedtimes on his daughter and two sons), a currency (gotta print some money to spend at the … hmmm, we’ll get back to that), a military (you never know when outside forces or mutinous inside forces will strike) and a flag (oops, he’s got that one covered already).

So, theoretically it can be done, but that’s a lot of time, money and effort spent to indulge the whim of a 6-year-old. However, as any father of a daughter will tell you, nothing’s too good for daddy’s little girl.

This article originally appeared in the September 2014 issue of the ABA Journal with this headline: “Birth of a Nation: Find unclaimed land, and you can be chief cook, bottle washer—and king!”