Business vs. Obama? Maybe Not 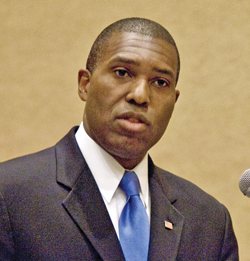 These are not the best of times between the Obama Justice Department and the business community. But even the worst times are not as bad as they might seem, according to a panel at the ABA Annual Meeting in San Francisco.

Assistant Attorney General Tony West, who heads the department’s civil division, said the division has three top priorities: protecting the American people, primarily through its handling of terrorist detainee cases; fighting waste and fraud in areas like health care services and government procurement; and consumer protection, which is getting more attention from the Justice Department as the recession drags on.

He noted that the civil division also is leading the federal government’s challenge to a controversial immigration law in Arizona.

“But,” West said, “events will hijack your agenda.” He described the civil division’s role in leading the Justice Department’s handling of legal issues stemming from the BP oil spill in the Gulf of Mexico. In particular, he said, “our job is to ensure that not one cent of public dollars goes to cleanup costs.”

Robin S. Conrad, executive vice president of the litigation arm of the U.S. Chamber of Commerce, said there are a number of concerns shared by the business community and West’s civil division, including the importance of fighting fraud and some immigration issues.

“We are not always at odds with the civil division,” said Conrad. “It’s a case-by-case thing. The chamber will agree when it can agree, and will disagree when it must.”

The Gulf oil spill is one such area of disagreement, Conrad said. The drilling moratorium announced by the administration after the rig explosion in April, she said, was “hasty and ill-conceived.” Gregory Katsas, who headed up the civil division during the administration of President George W. Bush, was also on the panel hosted by the ABA Section of Administrative Law and Regulatory Practice.

Now a partner at Jones Day in Washington, D.C., Katsas said the civil division has continued to follow a number of positions introduced during that administration. “What we’re seeing,” Katsas said, “is a continuity between the positions we took and the positions Tony’s team has taken.”