Anatomy of an extensive default judgment 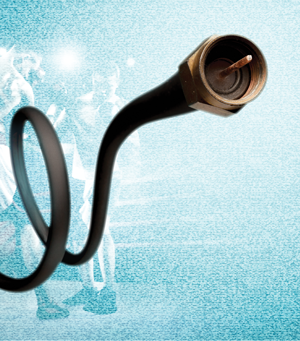 A Pennsylvania federal court case was unusual because of the staggering amount of work the judge put into explaining her reasoning in an otherwise routine default judgment.

Also see our cover story: "Who's the pirate?"


U.S. District Judge Gene E.K. Pratter of Pennsylvania’s Eastern District severely pared down the scope of Thomas P. Riley’s motion in Joe Hand Promotions Inc. v. Yakubets, which concerned Café Nostalgie, a Philadelphia bar. In a 13-page memorandum (PDF), the judge called for a refiling based on limitations he set out.

After that was done, on March 11, 2014, Pratter issued a much longer opinion (PDF) that—while awarding Joe Hand Promotions actual and enhanced damages of somewhat lesser amounts than are usual in such cases—in effect dared Riley to ask for attorney fees and costs.

The judge went to great lengths to explain why many courts can’t be bothered with so much work in such a case and why she thought it was necessary to do so this time.

As he frequently does, court records show, Riley had sought damages under two federal statutes: 47 USC §605 for satellite signal piracy and Section 553 for cable. Both are strict liability, although there are some escape avenues from awarding damages. Section 605 has a higher range for statutory and enhanced damages of up to $110,000, plus mandatory costs and attorney fees.

Section 553 provides for a maximum of up to $60,000 in damages, and awarding costs and attorney fees is discretionary. Thus, the suit demanded $170,000-plus in damages, combining the maximum awards of both statutes.

The federal circuits are split on this dual application, although courts have been moving more toward the more forgiving Section 553 when the plaintiff doesn’t provide proof that it was indeed a satellite communication. That includes the 3rd U.S. Circuit Court of Appeals at Philadelphia, which includes Pennsylvania in its jurisdiction.

When Riley refiled with only that Section 553 charge, Pratter took the case and application of the law apart, explaining what other courts have done concerning damages, and put them back together in 57 pages to bolster her own reasoning.

If “the district court accepts the plaintiff’s invitation and grants its imprimatur to the plaintiff’s unchallenged legal theory, the court risks making bad law,” Pratter wrote, also noting an unopposed motion for default judgment “can be a tempting invitation” for a judge to simply accept the plaintiff’s view of the law and the facts.

“This risk is especially dangerous where a region of the legal landscape is typified by defaults, for
default judgments not only often result from one-sided proceedings but also rarely weather the appellate scrutiny necessary to ensure the law’s uniformity,” Pratter continued.

In her earlier memorandum, the judge had written that she was “concerned about Mr. Riley’s representations to the court,” such as highlighting a California case to imply that an award based on both statutes is viable when the 3rd Circuit’s 2001 precedent in TKR Cable Co. v. Cable City Corp. says otherwise.

“Of possibly greater concern is that this is not the first time that a court in this district has admonished Mr. Riley regarding this broader issue,” the judge wrote. “By now, he should know better.”

As harshly as she criticized Riley, the judge still awarded Joe Hand Promotions $4,880 based solely on Daniel Szlezak’s affidavit. Both statutes permit minimal awards: $100 for cable and $250 for satellite signal theft if the court finds a lack of willfulness, which means the defendant wasn’t aware of any violation and did not do it for commercial advantage or private financial gain.

But it’s hard for a court to find such certainty in a case in which the defendant doesn’t respond. Thus, awards often include more than what’s the minimum for actual damages as well as some enhanced damages.

Pratter noted that Szlezak could have snapped a photo of the menu’s pricing and asked the server about crowd sizes on other nights, but then used several facts (including Szlezak’s head count and the lack of a cover charge) to craft an award. The award would have been $1,220 in statutory damages, based on the $500 cost of a license to show the fight and an estimated $720 in profits on food and drink; plus that amount trebled for enhanced damages; and another $500 for the owner’s joint and several liability.

The judge arrived at this formula after surveying similar cases around the country. She noted a variety of approaches and that other courts applied larger multipliers and awarded significantly more money. The variances might be partly due to the fact that these nonadversarial default judgments rarely get appellate scrutiny, she wrote.

Then, in a footnote, Pratter wrote, “The fact that Joe Hand can cherry-pick a handful of such decisions awarding such amounts as it would like here (or even that its lawyer, as the man behind much of this litigation all across the country, has managed to convince as many courts as he has to award relatively high statutory damages based on deterrence or other considerations irrelevant at this stage) is unmoving.”

Pratter noted near the end of her opinion that the plaintiff might be awarded costs and reasonable attorney fees, but that given the case’s procedural history, there would be need to explain why Riley’s fees are reasonable and why a judge can’t decrease a fee award based on factors not raised by the other side.

That was the last filing in the case. Riley didn’t take the bait.