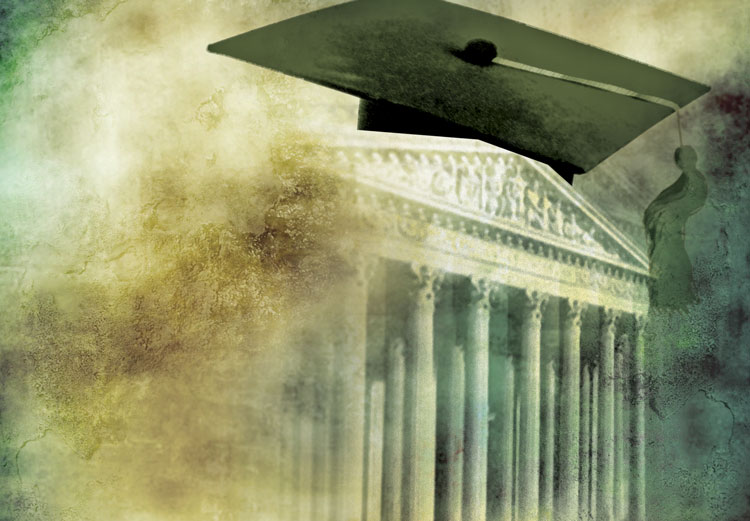 The last several years have seen a groundswell of legal complaints against colleges and universities—by both students who say they were victims of sexual assault on campus and students who say they were wrongfully sanctioned for alleged misconduct. Many have been high-profile cases; and all are high-stakes, with implications for ruining a college career—and worse—on both sides.

In September, the Department of Education overturned the Obama administration’s guidelines on how campus sexual assault allegations should be handled and investigated, giving schools greater control over matters like what standard of proof is used by decision-makers. The reversal has polarized the legal community, with victims’ rights advocates concerned the move will dismantle years of progress and others sure the decision will offer needed due process protections.

One thing is certain: The problem of campus sexual assault has been under scrutiny for a long time, with very little consensus on the best way for schools to discipline, and protect, all parties.

In March 2014, a freshman at the University of Oregon went to an off-campus party where she was allegedly assaulted by three members of the school’s basketball team.

The student, who said she had been drinking, told authorities she had been sexually assaulted at the party and then, later, at another apartment. The men—Brandon Austin, Dominic Artis and Damyean Dotson (who now plays for the New York Knicks)—said the sex was consensual.

The Lane County district attorney declined to prosecute the men, stating that the case was unprovable. The situation garnered a great deal of publicity, leading to protests on campus that spring.

Although the school initially suspended the three Oregon Ducks players, it later revised the suspension by allowing them to attend school and practice. Two of the men played in the team’s NCAA tournament games that same month, according to the Oregonian. But that May, the school suspended all three of the accused students for four to 10 years.

As in many situations where students make accusations of sexual assault, the school’s response to the allegations angered all sides.

The female student sued, claiming the school mishandled her complaint. Among other allegations, she argued that the school waited too long—more than two months—to fully suspend the players.

Her lawsuit, like that of many other students who allege sex assault by peers, included claims that the school violated Title IX of the Education Amendments of 1972—which prohibits schools that receive federal funds from discriminating based on gender. In 2015, the university settled with the student for $800,000.

The three accused men are also pursuing claims against the school. They also argue that their Title IX rights were violated, and argue that pressure from protesters spurred the school to discipline them based on their gender.

U.S. District Judge Michael McShane dismissed the men’s lawsuit in June. McShane wrote that they were suspended for violating the school’s conduct code, which requires students to obtain “explicit consent” before sexual penetration.

The three are taking their cases to the 9th U.S. Circuit Court of Appeals at San Francisco. 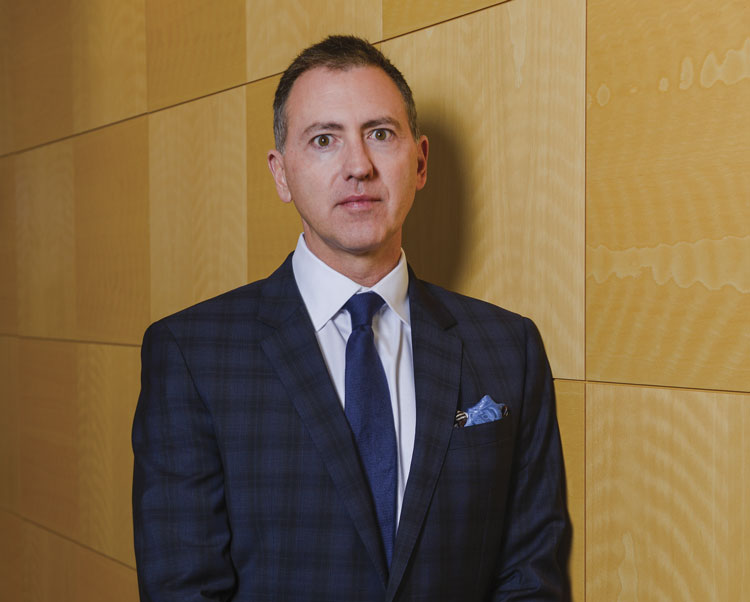 John Clune: “They were talented students—great students in high school—and are now working at Target.” Photo by McCory James.

CAUGHT IN THE CROSSHAIRS

The University of Oregon isn’t alone in facing lawsuits after a sex assault accusation.

Schools throughout the country have recently agreed to settlements with students who say they were assaulted, as well as those who have been accused.

Florida State University agreed in January 2016 to pay former student Erica Kinsman $950,000 to resolve a Title IX lawsuit. Kinsman alleged that she was raped in 2012 by Jameis Winston, and that school officials responded to the allegation with deliberate indifference. Winston, who won the Heisman Trophy in 2013, denied the allegations and said the encounter was consensual.

The University of Tennessee at Knoxville agreed in July 2016 to pay $2.48 million to settle allegations by eight women who said the school’s disciplinary program was biased in favor of athletes accused of sexual assault. And the University of Connecticut agreed in 2014 to pay $1.28 million to five students who alleged the school had mishandled separate complaints of sex assault and harassment.

Perhaps most notoriously, Baylor University in Waco, Texas, is facing federal lawsuits over allegations of multiple assaults by members of the football team. One of the complaints alleged that between 2011 and 2014, at least 52 rapes were committed by at least 31 school football players.

A school administrative review at Baylor cleared player Sam Ukwuachu of sexual misconduct in 2015. Several months later, a jury found him guilty of sexual assault, but that decision was overturned by an appellate court in March 2017. The appeals court ruled that text messages between the complainant and a friend of hers on the night of the incident were wrongly excluded from evidence. Ukwuachu had argued that those texts showed the accuser consented to have sex with him. In September, the Texas Court of Criminal Appeals agreed to review the state’s appeal of the lower court reversal.

The Baptist school, which has already settled three lawsuits brought by victims, has recently implemented a number of changes to its procedures. Among other initiatives, the school now offers a tool that allows students to make online reports about sexual violence—including anonymous reports. Baylor also now requires annual Title IX training for faculty, staff and first-year students.

But sex assault victims aren’t the only ones suing schools. At least 150 students accused of sexual misconduct have filed their own lawsuits, according to Title IX for All, which advocates for the rights of men and boys in education.

On top of the lawsuits, the federal government has opened 445 civil rights investigations of colleges for how they handled reports of sexual assault and resolved 92 cases, according to the Chronicle of Higher Education. At least 18 of those resolutions were “administrative closures,” in which the details aren’t publicly available. A number of others were withdrawn by students. But in many cases, the schools agreed to implement new policies and procedures for handling sex assault complaints. The extent to which the DOE will continue to pursue such investigations under the current administration is uncertain.

TITLE IX AND BEYOND

Eighteen years ago, the Supreme Court ruled in the case of Davis v. Monroe that schools can be liable for Title IX violations when students harass other students, if the schools are deliberately indifferent to the harassment.

But observers trace much of the current legal activity surrounding campus sex assault to a more recent date—April 4, 2011, when the Obama administration issued what’s now known as the “Dear Colleague” letter.

That game-changing directive, unveiled by former Vice President Joe Biden and former Secretary of Education Arne Duncan, said that Title IX required schools to investigate sex assault allegations and adjudicate the allegations under a “preponderance of the evidence” standard—the same as for civil lawsuits.

The guidance also discouraged allowing students to question each other during the campus proceedings.

Before that letter came out, 70 percent of schools already used a preponderance-of-the-evidence standard, while others—including Cornell, Harvard, Princeton, Stanford, the University of Virginia and Yale—used a higher standard of either clear and convincing evidence or beyond a reasonable doubt, according to Inside Higher Ed.

In September, Education Secretary Betsy DeVos announced a reversal, issuing new interim guidance on how to investigate and adjudicate campus sexual misconduct. In addition, the department opened a notice-and-comment procedure to determine the rules schools should follow when dealing with allegations of sexual assault.

“The system established by the prior administration has failed too many students,” DeVos said. “Survivors, victims of a lack of due process, and campus administrators have all told me that the current approach does a disservice to everyone involved.”

The 2011 Dear Colleague letter “put colleges squarely in the middle of the debate between the rights of the accused and the rights of people who’ve been victimized,” says Peter Lake, a Stetson University law professor and an expert in Title IX compliance.

Schools that don’t follow the guidelines potentially faced the loss of federal funding. But schools that don’t protect the rights of accused students also confront the prospect of lawsuits. Complicating matters is the murky nature of some sex assault allegations. These incidents often occur when both parties have been drinking, clouding judgment and memory. Often the only witnesses are the two people involved, and they may have very different perceptions of the events.

Given all this, the Trump administration’s new position has alarmed victims’ rights advocates, who fully supported the prior administration’s stance that offered greater protection for women during investigations. They say that many schools didn’t treat sex assault allegations seriously enough in the past, often resulting in victims dropping out of school—while the alleged assailant remained on campus.

“In a lot of these cases, they never have the strength and courage to go back to school,” says Boulder, Colorado, lawyer John Clune, who represents victims in Title IX lawsuits throughout the country, including the student who sued the University of Oregon. Clune estimates that as many as half of the students he’s represented left school after being assaulted.

“They were talented students—great students in high school—and are now working at Target,” he says.

“Victims have been coming forward for years, saying they didn’t feel they were getting the support and the transparency they needed and wanted when they brought these cases to an institution,” says Healy, who previously served as director of public safety at Princeton University. “Victims are fed up that they’re not believed, that they’re blamed for whatever incident happened, and that authorities aren’t taking their complaint seriously.”

But lawyers who represent accused students say the Dear Colleague letter unfairly tilted the field against them. Defense lawyers argue that the school officials who investigate these cases often are biased in favor of accusers, and that the level of proof is frequently inadequate.

“There are massive problems with the way that schools adjudicate these cases,” says Justin Dillon, a Washington, D.C., lawyer who has two cases pending against schools and one against the DOE’s Office for Civil Rights.

In one of those cases, a former University of Virginia law student was accused of having sex with a classmate who was too drunk to consent. He told school officials that the woman didn’t appear intoxicated on the night of the encounter. An adjudicator said the case was “very close” and “very difficult,” but that the evidence tipped “slightly” in favor of finding the man responsible for the charges, according to the male student’s complaint against the OCR.

The adjudicator suggested that a higher standard of proof would have tipped the scales in the accused’s favor, according to the complaint.

Dillon says the lawsuit seeks “to create a systemic fix” to perceived flaws in schools’ current systems. Like many other advocates for accused students, he contends that many school investigators are inclined to take the accusers’ side.

“Most of the people who run this process believe that you should always believe the accuser,” he says. “They set up a system that makes that incredibly easy to do.”

The American College of Trial Lawyers is among the groups that have criticized the Obama administration’s stance. “In a well-intentioned effort to address the significant problem of campus sexual assault, OCR has established investigative and disciplinary procedures that, in application, are in many cases fundamentally unfair to students accused of sexual misconduct,” the organization said in a white paper published earlier this year.