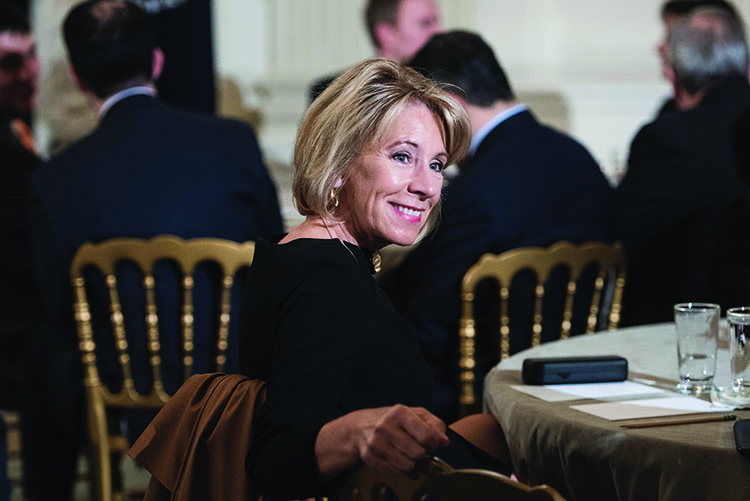 The letter specifically encouraged schools to adjudicate claims under a “preponderance of the evidence” standard—the same one used in civil cases. The guidance also discouraged schools from allowing cross-examination.

That 2011 letter and subsequent additional guidance in 2014 are widely seen as catalyzing schools across the country to respond more vigorously to claims of sexual assault.

In many cases, schools suspended or expelled alleged offenders based on the findings of an investigator but without holding hearings at which people testified or were cross-examined.

But as schools moved against alleged offenders, accused students countered that their due process rights were being ignored. Hundreds of students who were suspended or expelled sued their schools, often resulting in settlements or rulings against the schools.

Against that backdrop, Obama-era guidance was rescinded in September 2017 by Department of Education Secretary Betsy DeVos, who issued interim rules at that time. In November 2018, for the first time since 1975, regulations were proposed.

“Far too many students have been forced to go to court to ensure their rights are protected because the Department has not set out legally binding rules that hold schools accountable for responding to allegations of sexual harassment in a supportive, fair manner,” DeVos stated when she unveiled the proposed regulations.

Those potential rules, which have drawn more than 120,000 public comments, were not finalized at press time.

A closer look at the changes

Among various changes, the rules would redefine sexual harassment as “unwelcome conduct on the basis of sex that is so severe, pervasive and objectively offensive that it denies a person access to the school’s education program or activity.”

This is a change from the definition of sexual harassment as “unwelcome conduct of a sexual nature” in the 2011 “Dear Colleague” letter.

One of the most controversial of the new proposals would require schools to hold hearings at which accused students have some of the same safeguards as defendants in criminal proceedings. School officials would be required to presume accused students innocent of the allegations and would also have to allow both sides to be cross-examined.

The proposed regulations also would allow schools to adjudicate cases based on “clear and convincing” evidence—a higher standard than “preponderance of the evidence.”

Some advocates for accused students welcome many of the proposals.

Bazelon says the Dear Colleague letter “came from a good place,” but “ended up doing more harm than good.”

She adds that schools responded to the guidance by creating “kangaroo courts that expel people with no process at all or very little.”

Some prominent law professors have expressed support for portions of the proposed rules, arguing that students shouldn’t be subject to life-changing consequences of suspension or expulsion without due process safeguards.

“Given what’s at stake in these kinds of proceedings—both for the complainant and the accused student—you need fair procedures,” University of Pennsylvania Carey Law School professor and civil rights attorney David Rudovsky says.

But some victims’ advocates contend the proposed rules represent a step backward, arguing that survivors of sexual assault may not report incidents if they know they will face antagonistic questioning.

What’s more, opponents of the proposals argue, cross-examination isn’t necessarily the best way to elicit the truth from possible victims.

“Cross-examination is designed to be hostile and confrontational,” says Emily Martin, vice-president for education and workplace justice at the National Women’s Law Center. “A lot of schools aren’t going to have the capacity to put in place the sort of safeguards that you would have in a court of law to prevent harassment of a witness.”

Rudovsky counters that the answer isn’t to prohibit cross-examination—a long-established means for the accused to challenge allegations—but to ensure it’s conducted in the presence of a hearing officer who can halt improper questions.

Taking it to court

Bazelon adds that some judges have already ruled that accused students are entitled to the kinds of due process protections DeVos is proposing.

For instance, in September 2018, the Cincinnati-based 6th U.S. Circuit Court of Appeals ruled in Doe v. Baum that cross-examination is required when a college “is faced with competing narratives about potential misconduct.”

And in January 2019, a California appellate court ruled in Doe v. Allee that the University of Southern California’s process was “fundamentally flawed” because it didn’t provide for questioning.

The Boston-based 1st U.S. Circuit Court of Appeals also addressed the issue, but that court’s ruling didn’t go as far as the 6th Circuit’s. The judges in the 1st Circuit said in Haidak v. University of Massachusetts-Amherst that complainants should be subject to cross-examination—but also said questioning could be conducted by a neutral party, as opposed to an advocate for an accused student.

The students argue they were sanctioned by their schools without due process, and they are seeking to have their disciplinary records wiped clean.

The lawsuits aim “to essentially set aside the findings for everyone who went through what is now known as an unfair process,” says attorney Mark Hathaway, who represents the plaintiffs in California.

The schools are fighting the cases on numerous grounds, including that the lawsuits should not be certified as class-actions because each accused student’s case is unique.

Cunningham said the students’ claims were too different to warrant class-action status. For instance, he said, one accused student said he didn’t have an opportunity to cross-examine the complainant, and he also said the incident underlying the complaint occurred off-campus.

Another student also raised a cross-examination issue but added that CSU’s findings weren’t supported by the evidence. Cunningham granted the plaintiffs leave to amend.

Alameda County Superior Court Judge Brad Seligman dismissed the complaint against the University of California in December, with leave to amend.

If the rules proposed by DeVos are finalized, they will inevitably face lawsuits. Already, SurvJustice, a nonprofit that advocates for victims, and other groups have sued the Department of Education over the rescission of the Obama-era guidance and its replacement with interim guidance. The proposed regulations include some of the same provisions as the interim guidance, including one that allows schools to make findings based on “clear and convincing” evidence, instead of the “preponderance of the evidence” standard.

U.S. Magistrate Judge Jacqueline Scott Corley in the Northern District of California granted summary judgment to the Department of Education in November 2019 on the grounds that the interim guidance wasn’t the type of final rule that could subject schools to enforcement actions.

For now, SurvJustice and the other advocacy groups are appealing that decision to the 9th Circuit. After the Department of Education finalizes new rules, the groups are expected to bring new lawsuits.

Groups representing accused students will likely argue that the new regulations still don’t do enough to guarantee due process, Lake predicts, while victims might claim their rights have been compromised.

He adds that litigation surrounding the regulations could be protracted, with judges upholding some provisions but sending others back to the Department of Education for revisions.

“This could take years,” Lake says. “This mess is probably going to end up in a variety of very esoteric cases involving the Supreme Court.”

This article was originally published in the April/May 2020 issue under the headline, “Schooled in Due Process: Class actions and pending rules could change colleges’ sex assault procedures.”