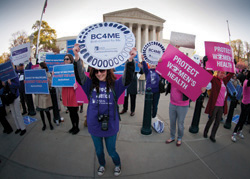 The Affordable Care Act’s contraceptive mandate has its supporters, but it faces a legal challenge that will come before the Supreme Court this term. Photo courtesy of SEIU International.

The Hobby Lobby chain of crafts and home decor stores has grown to more than 500 nationwide from its Oklahoma origins as a picture-frame business run out of the garage of founder David Green in 1970.

The family-controlled company has a statement of purpose committing to operate the chain “in a manner consistent with biblical principles.” That means stores are closed on Sundays, Christian music is played over the public address system, and customers will search in vain for products that promote alcohol, such as shot glasses.

At the Hobby Lobby store in Laurel, Md., a visit on a recent winter’s day found aisle after aisle of artificial plants, arts-and-crafts supplies, a 50-percent-off sale on “decorative crosses” and a variety of wall art with religious and patriotic slogans, such as “Blessed is the native whose God is the Lord.” There are also lots of picture frames for sale.

For the chain’s 13,000 full-time employees, Hobby Lobby provides relatively generous pay and benefits. But the reason the company is before the U.S. Supreme Court is for what it refuses to offer in its company health plan: drugs that can terminate a pregnancy, such as RU-486, and contraceptives that, in the view of the Green family, may prevent an embryo from implanting in the womb. These include contraceptives such as Plan B, Ella and two types of intrauterine devices.

“These abortion-causing drugs go against our faith, and our family is now being forced to choose between following the laws of the land that we love or maintaining the religious beliefs that have made our business successful,” Green said in a 2012 press call, when his company sued the U.S. Department of Health and Human Services over the “contraceptive mandate.”

The mandate stems from the Affordable Care Act’s provision requiring many health plans to cover certain preventive-health services without requiring individuals to make a copayment or other contribution. The specifics on the contraceptive requirement were developed as a federal regulation, based on recommendations of the Institute of Medicine, which called for the full range of contraceptives approved by the Food and Drug Administration to be covered.

Now, Hobby Lobby’s suit—along with that of Conestoga Wood Specialties Corp., an East Earl, Pa., producer of wood cabinet doors that is owned by a Mennonite Christian family— is set to go before the justices. Arguments are scheduled for March 25.

The question is whether the Religious Freedom Restoration Act, a 1993 law that requires the government to have a compelling interest to substantially burden “a person’s exercise of religion,” allows a for-profit corporation to deny contraceptive coverage to its employees.

The consolidated cases of Sebelius v. Hobby Lobby Stores Inc. and Conestoga Wood Specialties Corp. v. Sebelius mark the first time the Supreme Court will take up an issue under the Affordable Care Act since its landmark 2012 decision upholding President Barack Obama’s signature health care law. And there are other challenges on the way to the court from religiously affiliated organizations such as universities, schools and nursing homes that don’t meet the law’s exemption for churches but object to the contraceptive mandate on religious grounds.

One fundamental question in the granted cases is whether a for-profit company can be a person for the purpose of free exercise of religion. The companies say yes, citing among other arguments the observation in the 2010 Citizens United decision that First Amendment free speech protection extends to corporations, “both for-profit and nonprofit.”

“We don’t see any meaningful distinction between the religious beliefs of the family and the religious beliefs of the corporation,” says Kyle Duncan, the general counsel of the Becket Fund for Religious Liberty, a Washington, D.C.-based group that is representing Hobby Lobby. “You’re not going to see IBM deciding that it exercises religion,” Duncan adds. “But it’s easy to point to companies that operate based on certain moral principles. Hobby Lobby has always taken action based on religious principles.”

Matt Bowman, a senior legal counsel with the Alliance Defending Freedom, a Scottsdale, Ariz.-based group that is representing Conestoga Wood Specialties, notes that all of the 46 for-profit companies that challenged the contraceptive mandate nationwide are family-controlled concerns.

“Families have religious freedom,” Bowman says. “Families exercise their religions through their businesses in various forms.”

U.S. Solicitor General Donald B. Verrilli Jr., in the federal government’s merits brief in the Hobby Lobby case, argues that there is no reason to think Congress intended the Religious Freedom Restoration Act to grant for-profit corporations rights that had been reserved for individuals and religious nonprofit institutions.

“It has long been understood that when corporations enter the commercial world for profit, they necessarily submit themselves to legislation—such as Title VII, the Fair Labor Standards Act, the Americans with Disabilities Act and the Affordable Care Act—designed to protect the health, safety and welfare of employees,” Verrilli said in the brief.

The solicitor general stated, carefully and diplomatically, that “the Greens’ sincerely held religious opposition to certain forms of contraception is not subject to question in these proceedings, and their personal beliefs merit the full measure of protection that the Constitution and laws provide.”

But those beliefs are not burdened by a generally applicable law imposing obligations on a corporation. The Greens don’t personally employ Hobby Lobby’s 13,000 workers, Verrilli noted, and federal law does not even require them to provide a health plan.

Under the company’s theory, “any human resources manager who objects to the contraceptive-coverage provision could sue under RFRA to seek an exemption for the corporation that employs him, on the ground that he is the human actor responsible for corporate compliance with a requirement to which he has a religious objection,” the solicitor general said.

Meanwhile, the government makes several arguments on why it has a compelling interest for the contraceptive-coverage provision, asserting that it helps create a comprehensive health insurance system for all, fosters improvements to public health, and advances the goal of providing women with “equal access” to recommended health care services.

The administration’s allies speak up for those interests. “Taking away the pre-existing condition of being female is an important consideration in the equity of this,” says Dr. Nancy Stanwood, the board chair of Physicians for Reproductive Health, a group that supports access to contraceptives and abortion.

“We know that contraception is a crucial preventative medicine for women,” adds Stanwood, an associate professor of obstetrics, gynecology and reproductive sciences at Yale medical school. “Historically, women have been very sensitive to the costs of contraceptives in their budgets, and the more effective contraceptive methods are the ones with the higher upfront costs.”

Hobby Lobby and Conestega Wood Specialties contend that the religious beliefs of their owners are very much burdened by the government’s requirement and that the mandate cannot survive strict scrutiny. Among their chief arguments is that the contraceptive provision has been applied haphazardly, with multiple exemptions and exceptions.

These include a “grandfathering” provision exempting as many as half of large corporate plans from the requirement as long as such plans have not made substantial changes since 2010. Also, firms with fewer than 50 employees are not subject to the requirement. And the government has put forth its controversial exemption plan for religiously affiliated organizations to self-certify that they cannot offer contraceptive coverage themselves.

“The government has chosen not to impose this mandate on tens of millions of women,” says the ADF’s Bowman. “But for people of faith, there is no exemption.”

Duncan of the Becket Fund echoes the argument: “If the government can accommodate religious objections for all these other organizations, why can’t it do that for the Greens and Hobby Lobby? Why is it the last straw to not give it to the corporations?”

This article originally appeared in the March 2014 issue of the ABA Journal with this headline: “Obamacare, the sequel: Companies claim contraceptive mandate goes against owners’ religious beliefs.”