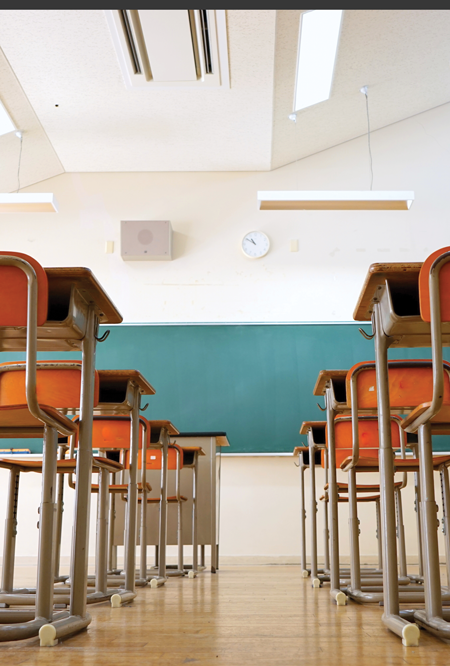 In some Detroit schools, Mark Rosenbaum says, there are more rats than teachers.

Rosenbaum visited several of the city’s schools last year to prepare for a class action lawsuit alleging that those schools are chronically and catastrophically underfunded. What he found, he says, could be called schools in name only.

“The proficiency scores in those schools, in terms of basic literacy, hovered around zero,” says Rosenbaum of the Los Angeles-based public interest firm Public Counsel. “There were students who were assigned to classrooms where there were no teachers at all. They just sat for periods at a time.”

And then there were the facilities. Rosenbaum found schools where the air conditioning and heating systems malfunctioned, requiring students to try to learn in stifling heat or in Michigan’s bitter winter cold. Teachers were buying not only their own school supplies but their own toilet paper. Some started every morning by cleaning rat droppings out of their classrooms.

In Gary B. v. Snyder, Rosenbaum and his colleagues say these conditions are so bad that the state of Michigan—which has directly run the Detroit Public Schools for most of this century—has effectively excluded certain schoolchildren from the state’s public education system. And that, the lawsuit charges, violates the kids’ fundamental right to literacy.

That’s an ambitious claim. The Constitution doesn’t mention literacy, and the U.S. Supreme Court has rejected claims that there’s a fundamental right to an education. But Rosenbaum doesn’t see it that way.

“The actual case itself, I suppose, you could call novel, but the basis of the claims is anything but,” he says. “It is a coming together of just basic notions of equality and liberty and dignity—that is what the 14th Amendment was ratified to deal with in the first place.”

Though the economic decline of Detroit is part of why its schools are in bad shape, 80 percent of education funding in all Michigan schools comes from the state. That’s thanks to a 1994 law intended to reduce property taxes and equalize school funding statewide.

But according to a 2015 paper from Michigan State University’s Education Policy Center, the complex formula Michigan uses to fund schools has resulted in a loss of about a quarter of per-student funding—adjusted for inflation—since 2002. The formula also makes it harder to add extra funding for high-needs students, the paper says.

The complaint in Gary B. alleges that problems in Detroit were worsened by state control of DPS from 1999 through 2006 and from 2008 through 2016. Local control resumed in 2017. During that time, the lawsuit says, the state has consistently underfunded Detroit’s schools and displayed “deliberate indifference” to their well-being. For example, the state legislature passed a law last June permitting DPS to hire teachers with no credentials, as long as they had some education and experience, as officials deemed appropriate. This is allowed nowhere else in Michigan.

The state has also routinely appointed emergency managers who had political connections but no experience in education, the lawsuit says. One of them, Darnell Earley, came to the role directly after acting as emergency manager in Flint and has been criminally charged for his role in that city’s water crisis.

In addition to naming the state itself, the lawsuit names as defendants Republican Gov. Rick Snyder and 11 state officials whose jobs are related to education.

Sean Perrin, who teaches sixth-grade math and science at J.E. Clark Preparatory Academy in Detroit, says DPS made some efforts to improve the facilities last year. Still, there are problems at Clark: Three teaching posts were empty in December, with aides running the classrooms; his classroom has mice; and the school’s boiler requires several hours to fully heat, which on certain days means everyone has to wear coats indoors for a few hours.

Perrin has taught under both local control and state control of DPS. He says state control created so much bureaucracy that it was hard to get extra funding for field trips and the like. “You can’t even do the things you want to do with the kids because of the lack of funds,” he says. “It’s taken away the morale of many teachers, where they have also gone to other districts; and therefore, we have a teacher shortage. And we have lower student enrollment.”

Fundamental rights are those subject to strict scrutiny from the courts, found in either the Bill of Rights or court decisions interpreting the due process clause of the 14th Amendment. Rights in that latter category include interstate travel, privacy and marriage.

With Gary B., the plaintiffs could add literacy to that list. The argument that it’s a fundamental right relies in part on a Supreme Court case concerning public schools, 1973’s San Antonio Independent School District v. Rodriguez. That might seem like an odd choice at first glance because in Rodriguez, the Supreme Court held that education was not a fundamental right, rebuffing a challenge to the Texas school funding system.

However, says Tacy Flint, a partner at Sidley Austin in Chicago and one of the plaintiffs’ lawyers, the court declined to say whether it would be unconstitutional to use a system that “occasioned an absolute denial of educational opportunities to any of its children.”

“It left that for another day,” Flint says. “And that’s what we think is happening here.”

Using those statements and others, the lawsuit argues that the state has violated DPS students’ 14th Amendment rights to due process and equal protection by creating schools so bad that students are effectively getting no education at all. That argument got support from three amicus briefs filed on Jan. 31, 2016, by the AFL-CIO, the city of Detroit and 482Forward, a community-based education advocacy group.

Attorneys for the state of Michigan did not answer interview requests. But in the state’s motion to dismiss the lawsuit, filed last November, it discounts the ambitious claim at the heart of the Gary B. suit: “There is no fundamental right to literacy.”

Establishing one will be an uphill battle, education policy experts say. Professor Benjamin Superfine of the University of Illinois at Chicago says school finance litigation has generally not succeeded in the federal courts after Rodriguez. There are still successful lawsuits, but he says they tend to rely on education clauses in state constitutions, which have no parallel in the U.S. Constitution.

“There’s a much weaker textual basis for the lawsuit than we see in state-level school finance litigation,” says Superfine, who also has a law degree.

Superfine says establishing a federal right to literacy could be “a game changer for large-scale education reform,” giving plaintiffs across the country a tool for forcing change.

Law professor Kimberly Jenkins Robinson, who teaches education law and policy at the University of Richmond, agrees that a win in federal court could have national implications.

“If your state supreme court says you have a robust right, like in New Jersey, you could get some significant reforms,” she says. “But a Texas child has no other options. So if this case is fully successful ... a child anywhere in the United States would be able to access the right to literacy.”

In addition, Robinson says, a federal court may have more ability to enforce the reforms it orders—something that’s often been a problem with state courts.

Plaintiffs lawyers have clearly thought about the case’s potential to reach beyond Detroit. The senior lawyer in Sidley’s appellate and Supreme Court practice, Carter Phillips, is on the case, as are constitutional law professors Evan Caminker of the University of Michigan and Erwin Chemerinsky, dean of the University of California at Irvine School of Law (who writes a column for the ABA Journal).

Superfine cautions that even a Supreme Court win would be only a first step toward school finance reform. Lasting change would mean courts and communities will have to stay involved.

“I think it would be a wonderful first step because, you know, political means have clearly failed in DPS,” says Superfine. “But it’s only the first step.”

This article originally appeared in the March 2017 issue of the ABA Journal with this headline: "Right to Learn: Advocates for Detroit students say there’s a constitutional claim to literacy."