Technology rewires the drafting and reviewing of contracts 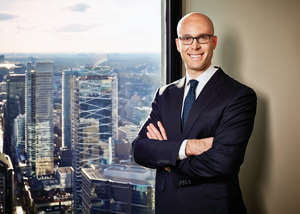 DiligenceEngine co-founder Noah Waisberg claims his firm’s automated contract-review system cuts through the process by up to 60 percent. Photo by Matthew Liteplo.

Litigation has already proven to be fertile ground for computers and technology to assist, and in some cases replace, lawyers. And while there are plenty of choices for law firms and companies looking to modernize their approach to electronic discovery, the market is still somewhat fallow when it comes to the transactional side of the law.

That could be changing. A legal startup called DiligenceEngine Inc. announced early this year the creation of new software that automates contract review. It joins a narrow niche of legal businesses offering this service.

"The clauses can be very complex and important to the deal," says Waisberg. "Junior-level associates shouldn't be doing that kind of work." He says the work should be going to more senior attorneys, but they either lack the time or cost much more per billable hour.

Waisberg recalls a $100 million transaction he worked on as a junior-level mergers and acquisitions associate at Weil, Gotshal & Manges that contained a very complex change-of-control clause. "The contract that contained this clause was worth, probably, half of the entire deal," he says. "And it took us weeks to interpret it."

Waisberg says DiligenceEngine's system cuts through the review process by up to 60 percent. His new software is also designed to educate junior associates while reducing their mistakes.

Waisberg says the system is similar to e-discovery tools that use predictive coding and machine learning. The system extracts certain clauses common to most contracts—such as change of control, assignment and indemnity clauses—and identifies them for associates. The software also shows where the clauses are located so attorneys can read and review them manually if they wish.

"We know our software does miss certain provisions, but it doesn't miss much," says Waisberg, whose partner in the venture is Alexander Hudek, who holds a PhD in computer science from the University of Waterloo. "A person using our system misses less than they would otherwise. It's an enhancement tool."

One DiligenceEngine user is Peter McRae, vice president and general counsel at U.S. Silver and Gold Inc. McRae was skeptical when he heard about the product from Waisberg, but he was intrigued by the possibility of gaining speed.

"We're a small internal legal team, and we spent something like 10 hours a day doing contract review," McRae says. "We used DiligenceEngine on projects during the summer of 2013 as we were looking at a bunch of old contracts and leases written on different typewriters. ... It did a good job."

Additionally, his fears of having a machine control the process were assuaged by the way DiligenceEngine was set up.

"You can check as you go, and if you need to review something, you can ... look at it while the machine is reviewing things," McRae says. "Having the actual contract in hand is comforting, although the machine's ability to recognize words was pretty amazing."

Using computers to analyze contracts is not a new concept. Kingsley Martin, president and chief executive officer at KMStandards, has been in the business of technology-assisted contract review for several years and welcomes DiligenceEngine's arrival.

"There aren't many players in this field," Martin says.

He is also quick to distinguish between DiligenceEngine and his own ContractStandards tool, which he says can draft agreements and audit them for the necessary clauses. "DiligenceEngine seems more focused on the audit field," says Martin. He says ContractStandards creates a reference standard based on hundreds of executed contracts so that it not only finds specific clauses, but can analyze a contract to determine what clauses are missing or diverge from a standard agreement.

Martin foresees a rapidly growing market for businesses like his and Waisberg's. "Right now, we are where document review was in 1990 or so," he says. "That market exploded because you have to do discovery. On the other hand, this type of work only comes up in a few instances, like buying a company and inheriting contracts."

Increased governmental oversight, particularly in the health care and banking industries, will result in greater opportunities for players in the automated contract-review field, Martin says. And while he's pleased to see DiligenceEngine launch, he's not going to give it a pass. Martin says that KMStandards will be releasing its own audit-focused tool by the end of the year and promises that it will be more powerful than DiligenceEngine.

"We're going to come out with something that can run across all the clauses and pull out the metadata," Martin says.

This article originally appeared in the November 2014 issue of the ABA Journal with this headline: "Contracts 2.0: Technology rewires the drafting and reviewing of contracts."