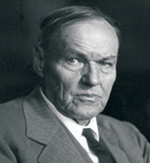 Whether you learned about Clarence Darrow from the fiction­alized film Inherit the Wind or from more accurate historical sources, certain characteristics probably come to mind when you hear his name: tireless opponent of the death penalty, champion of the working poor, great orator. Comedian, however, is probably not one of them.

But a set of recently released letters that Darrow wrote to his grandchildren may just change your impression of the great legal mind.

In the letters Darrow’s wit, whimsy and humor shine through the use of intentionally misspelled words, run-on sentences and language manipulated for pure comedic effect. “He writes as if [his grandchildren] were little kids,” says great-granddaughter Judith Besser of Homewood, Ill. “He makes them fun for them to read with the wrong tense and other things. All the things a grandpa might do.”

In one of the letters, written during a trip to London, Darrow described England to his grandchildren. It is “a country in the Atlantic Oshun which was discovered by ritch Americans where they could spend there munny.”

He refers to a grandchild’s university campus as “Collidgeville” and imparts the following insight about the king of England: “I forgotten to tell you that the kings name is George. I don’t know what his other name is. They just call him George like some people do the waiters in the restaurants. If there is enny thing to do they let him do it.”

While Darrow’s sense of humor may not have been well-known, within the family it was legend. Besser says he frequently played the role of court jester—at least among his grandchildren.

Besser recently read the letter from London aloud at an ABA Annual Meeting program in honor of her great-grandfather. But she says some of her extended family wanted to keep the letters private. Besser says an aunt with a “Victorian mindset” thought the release of the letters might change the public’s opinion of the famed lawyer.

She thought they would make people “think my great-grandfather was stupid,” Besser says. “To me that was so silly. We wanted to make him human.”

While Besser was always aware of her great-grandfather’s notoriety, she never asked his son about him. Darrow’s son—Besser’s grandfather—died when she was 16. Over time she has come to realize how much she had wanted to know about her great-grandfather. Besser hopes that the letters will help others learn more about Darrow, much as they did for her. “He had quite a sense of humor, but it sneaks up on you,” she says.

“He has the look of a grouchy old man. There are very few photographs with a smile on his face. He was intimidating-looking.”

Web extra: See One of Clarence Darrow’s letters to his granddaughter Jessie