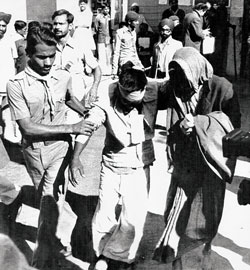 Shortly after midnight on Dec. 3, 1984, a flat, eerie cloud began to settle over the Indian city of Bhopal. The cloud was a plume of deadly methyl isocyanate leaked from a chemical plant located in the heart of the city. An estimated 2,000 people were killed almost instantly, most from asphyxiation and pulmonary edema. By morning, thousands more—many of them blind and debilitated—had collapsed in their homes or were writhing in the streets. Years later, the official death toll was set at 3,823.

The plant, owned by Connecticut-based Union Carbide, had manufactured pesticides since the late 1970s and was operated by an Indian subsidiary whose investors included the Indian government. When Union Carbide CEO Warren Anderson arrived in India to assess the damage, he was placed under house arrest. But after posting bond, he was released and returned to the United States.

Efforts to reach any substantial payout for Bhopal’s victims were delayed by litigation in both countries. In 1987, a U.S. appeals court affirmed a transfer of all Bhopal cases to India, ruling that Indian courts were better situated to distill what had become hundreds of thousands of claims. In 1989, Union Carbide reached a final settlement for $470 million. By 1993 there were more than 13,000 death claims and more than 630,000 demands for medical compensation—claims made even more complex by the medical complications of grinding poverty, political opportunism and the passage of time.

In 1992, the Bhopal district court asked for the extradition of Anderson to stand trial in India. Although Union Carbide maintained that a disgruntled employee had caused the accident, prosecutors also sought charges against executives of UC’s defunct Indian subsidiary. In June 2010, eight former UC officials were convicted of negligence and sentenced to two years in prison. Each was fined 100,000 rupees, about $2,100.