Deductive Reasoning: Documentary Filmmakers Get a Boost, as IRS Deductions Ruling Gets the Boot 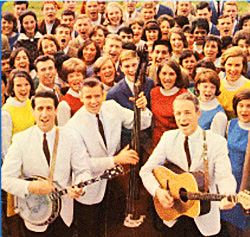 Up with People singing troupe

Eager young people may have joined Up with People to change the world, but Lee Storey says her motives for making a documentary about the famously ebullient singing troupe were purely financial.

The Internal Revenue Service, however, accused the Phoenix attorney of nobler objectives. Calling her project a “labor of love” inspired by the discovery that her husband had once been an Up with People cast member, it rejected hundreds of thousands of dollars in tax deductions she claimed for the costs of producing the film.

In a story as crowd-pleasing as any Up with People halftime show, Storey fought back and won. This spring a judge ruled that her expenses were deductible because her documentary was a business venture and not a hobby as the IRS argued. “I wouldn’t wish this experience on anybody, but I’m glad it worked out for the documentary film industry,” says Storey. “We set an important precedent.”

“This is a great relief to somebody financing a documentary out of their pocket or on a credit card,” says Los Angeles lawyer Michael Donaldson, who filed an amicus brief on behalf of the International Documentary Association.

Storey’s IRS dispute started in 2009 on the heels of an arduous project that began when her husband mentioned he’d performed with Up with People years before they met.

An amateur theater director, Storey happened to be looking for a documentary film topic. Up with People seemed perfect. There was the youthful exuberance of cast members brimming with idealism. There was the excitement and glamour of international tours and performances for global leaders. And there was a darker political backstory: The group was launched by an organization called Moral Re-Armament as a response to 1960s counterculture, and some argue Richard Nixon used it to advance his aims.

“I thought there was a great market,” for the film, Storey says, noting the 20,000 Up with People alumni. “I was always thinking about who was going to buy it.”

She spent several years juggling her law practice and the myriad tasks of a film producer and director. She negotiated rights to Up with People materials, combed through the group’s film archives, and traveled the country interviewing former cast members. Storey pegs her total expenses at about $750,000, raised through a bank, personal funds and friends. The film, Smile ’til It Hurts: The Up with People Story, has generated few sales, though she’s marketing it through an agent and film festivals.