Split over hair: Proponents of deregulation seek to untangle laws on hair braiding 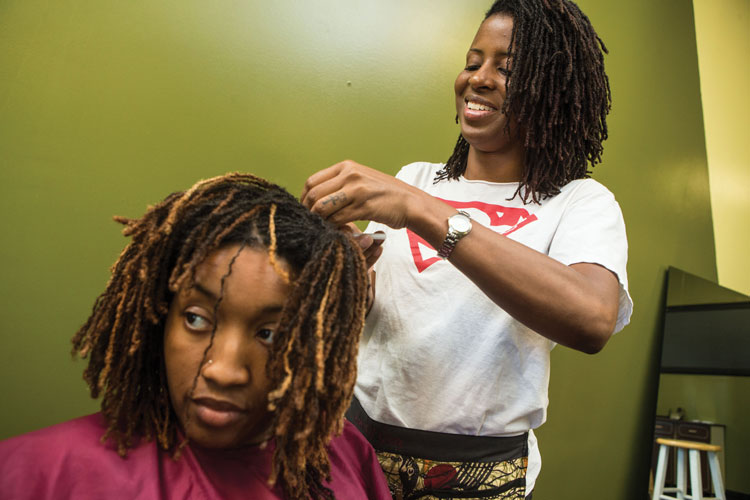 Photograph of Tameka Stigers courtesy of the Institute for Justice.

Carefully layering one tiny strand of hair over another, Tameka Stigers has spent years honing her talent for African-inspired, natural hair braiding.

The style she currently specializes in, delicate little twists trademarked as Sisterlocks, involves a process that can take up to 12 hours and relies on patiently working on small sections of hair with the hands, rather than using chemicals, hair irons or scissors. Stigers’ hair-braiding skills have become so prized that the St. Louis woman opened a free-standing salon dedicated to natural braiding last year.

Yet a cloud is hanging above her new business. Under Missouri law, for Stigers to operate legally, she would have to attend at least 1,500 hours of cosmetology classes, in which she’d learn dyeing, cutting, perming and other skills that have nothing to do with African-style braiding. “It’s the most asinine thing,” says Stigers, who has a master’s degree in public health.

The Missouri legislature passed a bill that will finally give Stigers a break. Instead of making hair braiders earn a degree in cosmetology, the law, passed in May, will require them to watch an in-depth instructional video on health and sanitation, register with the state, and pay a small licensing fee. Former Gov. Eric Greitens signed it on his way out of office in early June; absent a challenge, it will take effect this month.

Braiders such as Stigers, who worked illegally under the old scheme, will be able to come out from the shadows. The old rules, she says, “absolutely did not make sense.”

If Stigers were to move her business to nearby Tennessee, however, she’d be back on the wrong side of the law. Braiders there must complete at least 300 hours of training and get a specialty license to run a legal braiding business. An effort to loosen the Tennessee regulations fell apart in March amid a separate fight about combining barber and cosmetology licenses.

Hair braiding in the United States is governed by a patchwork of regulations—or lack of them—that critics say have not kept pace with popular braiding styles. The hodgepodge is providing an opening for libertarian-leaning lawyers.

The nonprofit Institute for Justice, a legal organization founded with money from free market proponent Charles Koch, has taken on what it says are unfair and oppressive regulations for hair braiders. The trend is in its favor. Over the past four years, more than a dozen states have loosened their rules for hair braiders—with an additional handful of state legislatures close to joining them.

According to the institute’s running tally of legislation, some 25 states had no licensing requirement for hair braiders as of mid-June. Another 15 or so states, including Illinois, Missouri and New York, plus the District of Columbia, have created specialty hair-braiding licenses that have much easier training requirements than for cosmetology. About 10 states require hair braiders to undergo the more rigorous process of going to cosmetology school and getting a cosmetology license.

Even so, some hair professionals still want rules in place to protect consumers from unsanitary practices and give them a place to complain. In 2011, North Carolina shifted from requiring no license for braiders to enacting a specialty license with a 300-hour education requirement.

African-style braiding has soared in popularity in recent years, as celebrities such as Beyoncé and Nicki Minaj have shown off braided locks. Many black and biracial women like that it’s chemical-free and lasts a long time.

Popular styles include box braids —which usually involve adding synthetic hair extensions to square-shaped sections of braided hair—as well as the tiny twists of Sisterlocks and head-hugging cornrows. The work can take an entire day and cost several hundreds of dollars. But clients save time and money by not needing to style their hair each day.

A hair braider’s tools are a comb, hair bands and in some cases boiling water to dip and seal the ends of braids. Although formal hair-braiding schools have cropped up, many braiders say they learned the skill as children from family members.

That simplicity drives some to argue braiding is a different industry from hair styling altogether—for which practitioners attend cosmetology school to learn about color treatments, highlights, permanent waves, chemical relaxers, and cutting and shaping. Some braiders complain that the people in charge of oversight know little about their craft, which dates back centuries to Africa.