Direct Answers: Examining a Witness Is Telling a Story--So Make It a Good One 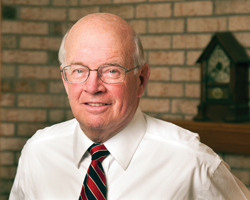 Editor’s Note: Jim McElhaney’s 25-year run as Litigation columnist for the ABA Journal will come to a close this fall. During those years, McElhaney’s straightforward advice on trial practice became one of the most popular features in the magazine. To recognize McElhaney’s contributions, the Journal is reprinting some of his “greatest hits” from the past quarter-century. This article originally appeared in the Journal’s March 1998 issue under the headline “Straight Talk on Direct.” It’s an example of the “letters columns” in which McElhaney’s fictional alter ego, the legendary Angus, sheds light on a trial technique issue by answering queries pulled out of his mailbag. Whether the letters to Angus were real or not wasn’t the point—it was the advice that really mattered.

Angus files the letters he receives about trial techniques by subject matter, so when I told him my next column was going to be about direct examination, he just pulled out the right file. All I had to do was pick the best letters, along with his responses. It’s a lot easier than writing, which can be real work.

I agreed to give a talk on opening statements for a local bar association program, and I was really excited because that’s when a good lawyer wins the case. But now they tell me I’ve got to talk about direct examination instead.

Do you have any suggestions for making a dull topic sound interesting?

You didn’t get the short straw. Sure, everybody talks about how important opening statements are, and they’re right. The jury starts to take sides during opening statements, but that’s not when you win or lose the case.

Make promises in your opening that you don’t deliver on and you’re what Texans mean when they say, “Big hat, no cattle.”

Facts, not hollow words, win lawsuits. Direct examination is when you prove those facts.

The problem is, most lawyers do it poorly. Most direct exams are so long, tedious, dull, disjointed and repetitious that everybody is relieved when they’re finally over. When you speak at that program, Stuck, you have an opportunity to get your audience excited about direct examination and show them how to do it right.

I have watched some of the best lawyers in the country try cases, and their direct examinations look so easy—they just have conversations with their witnesses. But no matter how carefully I prepare a witness, when I try the conversation method on direct, everything falls apart. What am I doing wrong?

Direct examination is not the same as having a conversation. It should sound like one, but it isn’t. Do it right, and you guide the witness every step of the way, without ever sounding like you’re putting words in the witness’s mouth.

You don’t want to sound like you’re telling the witness what to say, for three very good reasons: First, leading questions are an open invitation for your opponent to interrupt the witness’s testimony. And believe me, fragmented testimony is a lot harder to follow than a simple, coherent story that has a minimum of interruptions.

Second, even if the other side doesn’t object, leading on direct sends the message that the witness is not a good source of information and needs to be told what to say.

Third, leading on direct also tells the jury that the witness is happy to say whatever you want him to say, which hurts the credibility of both you and the witness.

So you want to guide the witness—direct where the testimony goes, point out the areas that need filling in with more detail—without looking like you’re Geppetto, standing over his puppet and pulling the strings.

Doing all that so it sounds conversational is one of the reasons why direct examination is much harder than cross. How can you possibly do it? By using the headline method of direct.

Before each new series of questions, announce the topic: the headline that tells the witness—and everyone else—what the subject is going to be.

Does it point the witness in the right direction?

Without a doubt. For example: “Mr. Dougan, I’m going to ask you some questions about your association with Mabel Schuster. How long have you known her?”

Can you use the headline method to get wandering witnesses back on track? Yes, and so comfortably they may not even notice: “We’ll get to your engineering work in just a minute, Mr. Dougan. Right now, I’d like to ask a few more questions about you and Ms. Schuster.”

But the real advantage of using headlines is that they make it easy to ask short, specific follow-up questions that are as broad or narrow as you like:

“Tell us, how much were you paying Ms. Schuster for each sketch?”

“Who told you what she was going to do?”

“Why didn’t you do anything to keep her from leaving your company?”

Short questions command instant comprehension from both the witness and the jury. The longer the question, the more you are likely to inject serious confusion.

Because short questions are so powerful, it’s worth the trouble to learn how to ask them. One of the best habits you can develop is to start every question with who, what, when, where, how or why.

After years of trial practice, direct examination is still my biggest problem. Even when the facts seem exciting to me, the testimony of most of my witnesses is pretty boring stuff. What can I do to make their testimony come alive?

Direct examination is a story. And the better you organize each direct exam to tell an interesting story, the better the results you will get.

Still, most direct testimony is not very interesting because most people are just not very good storytellers.

Luckily, though, there are some techniques that can make juries hang on the words of even ordinary witnesses. One of these techniques is the language of visualization.

Because people believe what they see, you want the jury to “see” what your witnesses say. The words you use in your questions help produce that effect. Use simple words like see, show and picture. See what they can do:

“What did you see when you walked into the room?”

“Would you show us what Ms. Anderson did when you handed her the contract?”

“Mr. Wilkins, would you give us a picture of what went on in that meeting with Ms. Anderson?”

Another way to make testimony come alive is to ask questions as if the events are happening right now instead of in the past:

Q: All right, Mr. Sanchez, you’re in the conference room on the second floor. Where are you standing when the policeman comes into the room?

A: Over by the wall, next to the window.

Q: Do you see Rachel Caulkins doing anything?

A: She’s pulling a gun out of her purse and pointing it at the cop.

Asking questions as if things are happening right now works in any kind of case, civil or criminal, business or personal injury. Just one caution: Do it sparingly.

To make sure I don’t overlook some crucial fact, I always organize my direct and cross-examinations with a list of the elements of my claim or defense in hand. That way, I know I can survive a motion for a directed verdict against me.

It’s a good idea to make a proof checklist for every case so you won’t miss some essential fact. But there is a problem with letting that checklist organize your case.

From the very first case you briefed in law school to every legal memorandum and brief you ever wrote, you’ve been organizing facts and arguments around legal issues. That kind of organization can help you present legal arguments to judges and other lawyers, but it can really get in the way when you’re talking to a jury. That’s because the average person doesn’t organize facts around legal issues.

Does that mean thinking like a lawyer actually can hurt your case? Without a doubt. But if you don’t organize your case around legal issues, what do you do?

Every direct examination is a story and ought to be put together like one. Because you have the tools to guide the witness on direct, you have the power to shape the story so it makes sense to the jury. You want the jury to see the facts from your client’s point of view so they can identify with your side of the case. That’s what gets lost in the legal checklist.