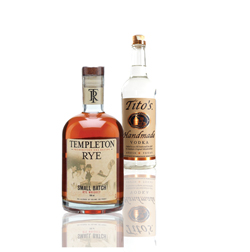 What does handmade, small batch or even all-natural mean when it comes to liquors and spirits? That's the question pending in numerous courts around the country as some niche distillers are finding their labels under scrutiny.


Templeton Rye, which markets its boutique rye whiskey as based on a recipe used by farmers in Templeton, Iowa, to supplement their income during Prohibition, has been sued three times over the last year for false labeling and deceptive practices.

"Templeton Rye is marketed as the revival of a Prohibition-era whiskey recipe that was the favorite drink of Chicago mobster Al Capone. … Defendant has marketed Templeton Rye as being ‘small batch' and ‘made in Iowa.' … However, directly contrary to these representations, defendant's whiskey isn't actually made in Iowa. The whiskey—despite being named after Templeton, Iowa, and owned by a company that owns a distillery there—is instead distilled and aged at the Indiana factory of MGB Ingredients Inc. that also distills and ages whiskey for countless other brands," states the complaint filed in Cook County, Illinois, in McNair v. Templeton Rye Spirits, one of the class actions pending against the whiskey maker.

Templeton, for its part, says it can claim locally made status because it adds its own ingredients at its Iowa facility to replicate the original recipe. Last fall, company co-founder Keith Kerkhoff, a grandson of recipe creator Alphons Kerkhoff, defended Templeton on YouTube, saying in a video posted there: "It's kind of like they make the flour and we bake the cake. And there's a total difference right there, if any of you folks have ever tried flour versus a baked cake."

Tito's Handmade Vodka has four similar cases against it pending in courts in California, Florida, Illinois and New Jersey. All the lawsuits allege the label's claims that the product is "handmade" and "crafted in an old-fashioned pot still by America's original microdistillery" are misleading. "On information and belief, the vodka was made, manufactured and/or produced in ‘massive buildings containing 10 floor-to-ceiling stills and bottling 500 cases an hour,' using automated machinery that is the antithesis of ‘handmade' and that is in direct contradiction to both the ‘handmade' representation and the ‘crafted in an old-fashioned pot still' representation on the product," claims the plaintiff. The case, Hoffman v. Fifth Generation Inc., was originally filed in San Diego County in California and has since been removed to a federal court there.

A statement released by the Austin, Texas-based Tito's in response to the California suit said in part that the vodka is still distilled at the same Austin location where the business was founded in 1995, using pot stills customized and hand-built on-site.

Real Housewives of New York's Bethenny Frankel also faced a class action suit in New York in 2013 over Skinnygirl Margarita's all-natural claims, but that suit was dismissed on standing.

Both Tito's and Templeton have noted that the U.S. Alcohol and Tobacco Tax and Trade Bureau approved their brands' labels.

Alcohol labels are unique in that they must first be approved by the federal agency, says Bernard Kipp, an alcohol compliance adviser with Stoel Rives, a law firm in Portland, Oregon. "Labels have to be preapproved by two standards: First, mandatory information such as type of alcohol and alcohol content; and second, on whether the labels contain any prohibitive practices—in other words, anything that can be considered misleading," Kipp says. "And that's very subjective. So a label can be preapproved, but that does not guarantee that the product matches what the label claims.

"Proving whether the statements on the label are true with these smaller distillers comes down to someone checking the batch records against the claims," he says. "That's where the rubber hits the road."

Kipp says the U.S. Supreme Court may be the impetus for the number of false advertising suits filed of late after its decision last year in Pom Wonderful v. Coca-Cola Co. The court greenlighted Pom's claims against Coca-Cola that the soft drink giant's product labels on its pomegranate blueberry drink were misleading because the beverage contained less than 1 percent of those juices.

This article originally appeared in the February 2015 issue of the ABA Journal with this headline: "Who Made That Hooch? Distillers are facing lawsuits over labeling claims."