DNA from arrested suspects is like any valid booking process, SCOTUS says 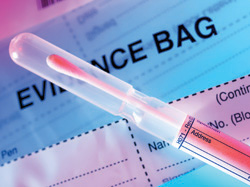 At February’s oral argument in Maryland v. King, about whether the police may take samples of DNA from people arrested for certain crimes, Justice Samuel A. Alito Jr. said it was “perhaps the most important criminal procedure case this court has heard in decades.” He suggested that such DNA swabs were “the fingerprinting of the 21st century.”

The Supreme Court’s decision in the case, issued in June, pretty much lived up to that billing. Justice Anthony M. Kennedy wrote for a 5-4 court that in an arrest for a serious offense backed by probable cause, “taking and analyzing a cheek swab of the arrestee’s DNA is, like fingerprinting and photographing, a legitimate police booking procedure that is reasonable under the Fourth Amendment.”

Kennedy’s opinion, joined by Alito as well as Chief Justice John G. Roberts Jr. and Justices Clarence Thomas and Stephen G. Breyer, was bad news for Alonzo Jay King Jr., a Maryland man arrested in 2009 on assault charges. King’s DNA sample was taken during booking under a 2008 state law that expanded mandatory sampling to include those arrested for certain serious offenses. The DNA swab linked King to a 2003 rape of a Salisbury, Md., woman; a sample of the perpetrator’s DNA had been entered into a database. King was convicted.

Justice Antonin Scalia wrote a vigorous dissent criticizing the majority for its assertion that the police take DNA samples primarily to identify those in custody, not to solve crimes. That assertion “taxes the credulity of the credulous,” Scalia said in a dissent joined by Justices Ruth Bader Ginsburg, Sonia Sotomayor and Elena Kagan. The decision will have the “beneficial effect” of helping to solve cold cases, he wrote, but so would taking DNA samples from a much broader swath of the population, including “anyone who flies on an airplane, … applies for a driver’s license or attends a public school.”

“There is no end of problems the court has created by deciding the case this way,” says University of Virginia law professor Brandon L. Garrett, an expert on DNA exonerations.

“People think this decision is fine because they want serious crimes to be solved, even at a cost to privacy,” adds Garrett, who filed an amicus brief on King’s side. “I don’t think people realize how few unsolved crimes have DNA evidence.”

“Obviously the swab itself is not very invasive,” Meyer says. “What people are really worried about is inclusion in the DNA database, and the querying of this database that goes on forever. But the only time it will return a hit is if you have left your DNA at a crime scene.”

She adds that “people don’t have a right to keep from the state the fact that they have been at a crime scene.” Meyer contributed to one of the first major academic treatments of DNA evidence, a 2004 volume called DNA and the Criminal Justice System.

Another contributor to that volume was Justice Breyer, who parted company with his fellow liberals to uphold Maryland’s law. In the chapter he wrote for the book, Breyer did not tip his hand on the specific issue of arrestee sampling, but he did predict that DNA evidence could make “future criminal trials more reliable,” and that “DNA identification may raise privacy concerns.”

In 2004, only three states were testing the DNA of arrestees. Now, 28 states and the federal government do so. (All 50 states require the collection of DNA from felony convicts, a practice that wasn’t challenged in King.) The number of states testing arrestees is expected to rise because of the decision and because of a federal law President Barack Obama signed in January that provides grants to the states for testing of arrestees.

“I would expect most of the states to follow suit pretty quickly,” Meyer says. “It does help solve crime.”

Garrett, however, argues that an expansion of DNA databases doesn’t really help solve crimes without more DNA from crime scenes.

“You can take DNA from everyone in the world, but if you don’t take it from the crime scene, you have nothing to test,” Garrett says.

The Combined DNA Index System, the national collection of databases known as CODIS, includes more than 10 million offender profiles (convicts and arrestees), according to an Urban Institute report that came out just before the decision in Maryland v. King.

But a vast expansion of arrestee DNA databases worries advocates such as Garrett, who are concerned about the potential for racial disparities in the database (since a disproportionate number of minority group members are arrested and convicted) and the issue of familial searches. With those, the police comb the database for matches that might implicate the relative of someone whose sample is available.

Pennsylvania State University law professor David H. Kaye says fears about law enforcement using DNA databases for more than identification purposes are overblown. He helped with an amicus brief filed by researchers in genetics and forensic sciences that supported neither side but intended to help the justices with the science of DNA testing. “The majority opinion rests on the premise that the state is not using this information to obtain what we would really think of as private or sensitive information,” says Kaye, who approves of the decision. “It really is just a token of identity, like a Social Security number.”

Kaye advocates for a universal DNA database of as many individuals as possible. “Is the point of arrest the sensible place to draw the line?” he asks. “I can imagine a system in which you take a sample from everyone. Newborns already have a heel prick taken for certain genetic testing. At the same time you could take a DNA sample. Not that you expect a newborn to commit a crime, but 20 years later the sample is there in the database.”

The King decision leaves a number of important issues unresolved. For example, Justice Kennedy said in his opinion that the arrests at issue should be supported by probable cause. This means that under Maryland’s law, while the DNA swab is taken at the station house, there would be a delay in processing the sample until there has been a probable cause determination.

But that’s not necessarily the case in other states. And while Maryland’s law covers only those arrested in relation to certain serious crimes, other states with arrestee testing laws go further, with some testing anyone arrested or charged with certain misdemeanors.

The 9th U.S. Circuit Court of Appeals at San Francisco had put on hold en banc review of a suit challenging California’s arrestee-testing law until the King decision, and it requested a new briefing afterward.

California searches the DNA of everyone arrested for any felony, including crimes such as stealing $250 worth of fruits or nuts from a farmer’s field, unlawfully subleasing a car or simple drug possession, notes the American Civil Liberties Union of Northern California, which challenged the law.

Michael T. Risher, a staff attorney with that ACLU chapter who is handling the case, says he found it unfortunate the Supreme Court chose Maryland’s law as a test of arrestee DNA sampling. Besides its limitation to serious crime arrests, the Maryland law requires expungement of DNA samples for arrestees who later are not convicted.

In California, he says, individuals who are arrested but not convicted are likely to have their DNA samples remain in the database unless they go through a lengthy and burdensome expungement process.

For these and other reasons, Risher was pressing forward to have the 9th Circuit strike down California’s law.

“The real result of these laws [is] threefold,” Risher says. “They do get DNA samples earlier from people. On the other hand, they seem to significantly slow down the processing of DNA samples from crime scenes. And they result in the taking of DNA from many people who are innocent.”