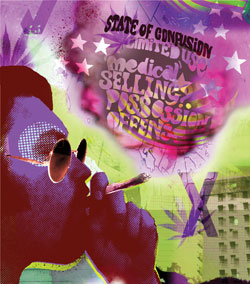 The legalized-marijuana industry may still have a strong whiff of counterculture sensibilities, but in many ways it’s no different from any other legitimate business.

For one thing, marijuana growers, sellers and marketers in states that have legalized the drug, at least to some extent, need lawyers to guide them through the growing maze of government regulations that apply to the industry. Marijuana use for medicinal purposes is legal in 20 states and the District of Columbia. Two of those states—Colorado and Washington—also permit marijuana to be used for recreational purposes.

But state laws legalizing marijuana use have put lawyers in an ethics bind because state rules of professional conduct prohibit lawyers from knowingly advising clients to engage in illegal activities. And marijuana continues to be an illegal drug under federal law, even though the U.S. Department of Justice announced in August that it will defer to state laws and enforcement efforts relating to medical and recreational use of marijuana as long as drug sales do not conflict with specified federal enforcement efforts.

Since then, some states have taken up the issue of whether and how professional conduct rules should be amended so lawyers may advise their clients on relevant state laws—or even use marijuana themselves.

On March 24, the Colorado Supreme Court issued a change to the comment (PDF) to Rule 1.2 of the Colorado Rules of Professional Conduct. The revised comment permits lawyers to advise marijuana businesses that operate under authority of a state constitutional amendment legalizing the drug for medical and recreational use. The comment says lawyers also should advise clients on relevant federal law and policy.

As of early May, the supreme courts of Nevada and Washington were considering similar proposals. The issue also is under consideration in Connecticut, but no proposal has been made public to date under the state’s procedures for revising lawyer conduct rules.

The problem is not that attorneys have actually been disciplined for marijuana-related activities. The professional regulation offices in Washington and Colorado, for instance, have promised not to initiate disciplinary proceedings against any lawyer who complies strictly with state law. Nor have ethics issues arisen in states with medical marijuana laws, even though some of them have been on the books for more than a decade. But there are concerns that, without formal changes in the ethics rules, attorneys will be reluctant to take on clients in the emerging marijuana industry.

“This is going to be a huge endeavor, it is very complicated, and people need lawyers to help them through this maze,” says Thomas M. Fitzpatrick, a member of Talmadge/Fitzpatrick in Seattle. “And that’s why ethical prohibitions that could keep lawyers from providing these services are so significant.”

Fitzpatrick and Troy R. Rackham, an ethics lawyer in Denver, both say other lawyers have told them they are too concerned about ethics complaints to take marijuana clients. The primary basis for these concerns is the statement in Rule 1.2 of the ABA Model Rules of Professional Conduct. The Model Rules provide the substantive basis for binding rules governing lawyer ethics in every state and the District of Columbia, although the rules in California follow a different format.

Model Rule 1.2(d) states that “a lawyer shall not counsel a client to engage, or assist a client, in conduct that the lawyer knows is criminal or fraudulent,” although the lawyer may discuss the legal consequences of any proposed course of conduct with a client, and may assist the client in making a good-faith determination of the validity, scope, meaning or application of the law.

Model Rule 8.4(b) states that it is professional misconduct for a lawyer to “commit a criminal act that reflects adversely on the lawyer’s honesty, trustworthiness or fitness as a lawyer in other respects.” This could be read to prevent attorneys from personally using marijuana or getting involved in a marijuana business permitted by state law.

Four states considered this ethics quandary before this year. Maine (2010), Colorado and Connecticut (both 2013) all concluded that attorneys may not help clients break federal law, although they may advise on state marijuana laws. In 2011, Arizona took a more permissive approach in saying that attorneys may technically violate federal drug laws if they stay within state laws. Colorado separately concluded that personal marijuana use doesn’t necessarily violate the state’s ethics rules for lawyers.

The Colorado opinions prompted the state supreme court’s Standing Committee on the Colorado Rules of Professional Conduct to propose new rules. Originally, there were two proposals: a comment to Rule 8.4, addressing personal use of marijuana, and a new Rule 8.6, addressing counseling of clients. But on March 24, the supreme court issued just the comment to Rule 1.2. The court did not address personal marijuana use by lawyers.

“This sentence imposes an affirmative duty of advice, which is fairly unusual and could expose a lawyer to discipline for not providing that advice,” says Rackham, a director at Fennemore Craig in Denver who participated in developing the proposals to the court as a member of the Colorado Bar Association’s ethics committee. “I suspect this was language agreed to as part of a compromise.”

IT’S UP TO THE STATES

The language in the revised comment to Rule 1.2 refers specifically to the state’s marijuana laws, reducing the chance that it will affect issues other than marijuana. By contrast, rule change proposals from the King County Bar Association in Washington and the State Bar of Nevada’s board of governors refer more broadly to “a specific provision of state law and implementing regulations” that may break federal law. David Clark, counsel for the State Bar of Nevada, was not aware of any opposition to Nevada’s proposal. But in Washington, the broader language is partly responsible for dueling proposals from the King County Bar Association and the state bar. The two bars agree on the basics: Attorneys may advise clients on the state’s marijuana law or use marijuana, as long as they stay within state law and the Justice Department’s policy of prosecutorial discretion does not change.

But the Washington State Bar Association’s Committee on Professional Ethics was concerned that the King County proposal created a blanket exemption from ethics prosecutions. Committee chair Mark Fucile, a partner at Fucile & Reising in Portland, Ore., whose practice also covers Washington, and Douglas Ende, the bar’s chief disciplinary counsel, said in a written statement that they didn’t want a rule change so broad that it could let attorneys off the hook even when they aren’t following state law. They also noted that federal marijuana enforcement policy is evolving and could be revoked by a new administration. For that reason, they believe a new rule would be premature and could even create “a false sense of security.”

That’s why the WSBA proposed only comments to rules 1.2 and 8.4. It also suggested an ethics opinion with guidance on conducting specific marijuana-related business. The Washington Supreme Court took the proposals under advisement in late February. Fitzpatrick anticipates a ruling from the court in late spring or early summer.

Fitzpatrick says it’s safe to assume that the Washington Supreme Court will take note of the ruling in Colo-rado. But a key question, he says, is whether revising the comment to a rule would provide sufficient guidance to lawyers or whether the black-letter language of the rule itself should be changed. “It’s basic ethical drafting that you cannot have commentary that changes the rule,” he says. Professor Stephen Gillers of New York University School of Law says he has been contacted by attorneys asking whether they could be in trouble for advising clients on marijuana. He notes that federal law has no authority over professional discipline. “If the state wants to decide that particular kinds of advice don’t warrant discipline, even if the advice happens to be a federal crime, that’s the state’s business,” says Gillers, who served as a member of the ABA Commission on Ethics 20/20 when it reviewed the impact of technology and globalization on the Model Rules.

The ABA Standing Committee on Ethics and Professional Responsibility, which issues opinions interpreting the Model Rules, is watching the issue but has no current plans to consider drafting revisions to Model Rules 1.2 or 8.4, says Dennis A. Rendleman, who is counsel to the committee. Fitzpatrick, for one, would like to see that change. “This problem is not going away,” he says. “It’s getting bigger.”

• Read the revised comment to Rule 1.2 of the Colorado Rules of Professional Conduct (PDF).

This article originally appeared in the June 2014 issue of the ABA Journal with this headline: “In a Haze: Lawyers wonder whether ethics rules allow them to advise clients on new laws legalizing marijuana.”