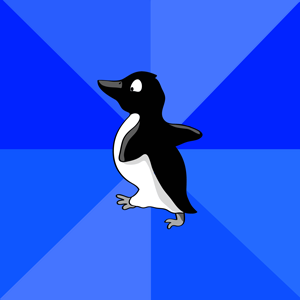 Who owns a meme—those pictures, videos and ideas that go viral on the internet?

In the case of the Socially Awkward Penguin, the answer might be National Geographic, since a staff photographer took the original penguin picture. Around 2009, internet users got hold of that photo, changed the background, added text and made it an internet phenomenon.

But stock photo company Getty Images says it controls the penguin—and its meme progeny. Last year, Getty Images, which licenses National Geographic’s pictures, told the German company Get Digital that it owed license fees for using the penguin meme on one of its blogs. And Getty’s bill was twice the normal licensing fee, according to Get Digital.

The company paid, but it balked when Getty allegedly demanded confidentiality about the transaction. Instead, co-CEO Philipp Stern went public with blog posts in German and English. That was September. Three months later, Stern said he had received nothing further from Getty Images.

Jeremy Malcolm, senior global policy analyst for the Electronic Frontier Foundation, says this might not have happened in the United States, where the use of the penguin would likely pass the fair-use test. But no such rule exists in Germany, he says, despite some recent debate on adopting one in the European Union.

According to Brad Kim, editor of the website Know Your Meme, it’s not unusual for copyright owners, especially stock photo companies, to send Digital Millennium Copyright Act takedown notices over memes. His site, which catalogs and explains memes, has removed at least 20 entries and deleted others at the request of copyright owners.

Kim says copyright threats from big media companies can backfire by drawing attention to an otherwise obscure phenomenon. “It kind of aggravates the meme audience because from the get-go, meme culture was fostered with ... complete disregard for copyright,” he says. “Especially when bigger companies file these claims, it only brings it an unnecessary spike in interest.”

It can also anger netizens. In 2010, the company behind the German WWII movie Das Untergang asked YouTube to take down a series of parodies in which a scene was resubtitled to show Adolf Hitler ranting about video games or politics. After those videos began disappearing, “Untergangers” started uploading more—with Hitler ranting about fair use.

As for Socially Awkward Penguin, Google Trends reports that searches have fallen considerably since the winter of 2011-2012. But for those who want to use the meme without fear, Get Digital has created a new image macro—and made it available free of copyright restrictions.

This article originally appeared in the September 2016 issue of the ABA Journal with this headline: “That’s Awkward! Do memes violate copyright law?”