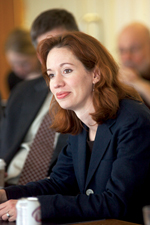 The red light on Camilla Taylor’s office phone is blinking; she has a voice mail.

As lead counsel for one of the country’s most prominent gay rights cases, Taylor’s mystery caller could be anyone—one of the world’s most prominent social scientists or a volun­teer leading an equal rights discussion in a small-town church basement.

This time it’s two callers from Iowa, and their message is familiar: “Our liberties we prize, and our rights we will maintain.”

On April 27, it did. After a seven-year campaign led by Taylor, the Iowa Supreme Court legalized same-sex marriage, unanimously holding that denial of marriage licenses based on sexual orientation violates the liberty and equal protection clauses in the state’s constitution.

The decision ended the longest and costliest case in Taylor’s career at Lambda Legal, the largest U.S. legal organization advocating equal rights for lesbians, gay men, bisexuals, transgender people and those with HIV.

YEARS IN THE MAKING

In 2005, Lambda Legal filed suit on behalf of six Polk County same-sex couples who were denied marriage licenses. But for Taylor, preparation began three years before.

Taylor joined Lambda Legal in 2002, and she is now senior staff attorney in the organization’s Midwest regional office in Chicago. She received an outpouring of phone calls and letters from same-sex couples who, like Rettig and Butler, were denied the benefits of marriage by every state in the country. The decision to ultimately file suit in Iowa’s Polk County District Court was carefully calculated, Taylor says.

“We try to be thoughtful and strategic on where we bring lawsuits; we don’t want to make bad law,” Taylor says, ticking off disappointing court losses in the states of Maryland, New York and Wash­ington. “We try to bring lawsuits where we can do the work necessary to win.”

Iowa, which has a history of applying broad equal rights and due process protection under its constitution, gave the Lambda Legal attorneys hope that its courts would play the same role they had in the past of pointing out injustice and opening the door to equality.

However, because this was the first time the issue of same-sex marriage had been raised in the state, nothing was certain.

Taylor and her co-counsels—Lambda Legal supervising staff attorney Kenneth D. Upton Jr. and former solicitor general of Iowa Dennis W. Johnson—laid the groundwork for their case by working with local LGBT organizations to educate Iowa families about equality in marriage, before partnering with LGBT advocacy group One Iowa to continue their mission.

“We spoke in church basements, senior centers, high schools,” Tay­lor recalls. “That type of effort you don’t do with every case, but we needed to avoid a potential backlash against our community.”

The legal team also compiled an enormous record for the court, which was supported by 15 amicus briefs representing 40 faith denominations.

“There were times, periods of six months here or there, when this case was all-consuming,” Taylor says. “We were deposing social scientists all over the world: London, Seattle, Los Angeles and Oakland, Calif. And the defense had designated purported experts in Mon­treal and Charlottesville, Va.”

Experts in child psychology testified to scientific studies on children in gay and lesbian households on behalf of the plaintiffs. The Iowa Supreme Court also conducted its own research, making clear that it didn’t rely solely on the mountain of evidence presented by Taylor’s team to find that there is no scientific evidence that children do best in heterosexual homes.

The enormous cost the plaintiffs’ attorneys incurred bolstering the record, supported by private donations, was money well-spent, Taylor says. “To see the contrast between the experts we called and the purported experts on the other side,” she says, “who had little or no experience with empirical studies and instead testified on their own person ideology, was striking.”

After the decision came down, a spontaneous rally erupted in the state park next to the library in the center of Des Moines. Nearly 1,000 people emerged from the city landscape to support same-sex couples and their families. Signs read “Hog wild for equality,” “Iowa is for lovers, really” and “California, this one is for you!”

“I’m in awe of these families,” Taylor says of her clients, six couples whose fight for marriage rights was largely fueled by the desire to give security to their children. “They are so incredibly brave.”

She remembered one couple, a part-time taxi driver who plays stand-up bass, and his partner, the organ player with a church choir. Bill Musser and Otter Dreaming live in a farmhouse in Decorah and communicate over the taxi radio, discussing their grocery list and orchestrating who will pick up their children. It’s often joked that listening to their radio conversations is one of the only forms of entertainment in Decorah.

“There are no secrets to how their life is struc­tured,” Taylor says.

When determining whether to pursue the couple’s case, “they would assure me that they were embraced by their neighbors and wouldn’t be vulnerable if we filed suit.”

It’s apparent that Taylor’s commitment to equality advocacy is fueled by the strength of her clients, as well as her own deeply rooted beliefs.

“I think the Iowa decision makes it clear that ending discrimination in marriage is consistent with one of the most core American values: That it’s necessary to support families.”