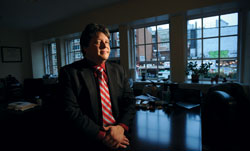 Though Sandy did no permanent damage to Winder’s office, it did damage his bottom line. Now the Bernardsville, N.J., solo is hoping that client worries about the “fiscal cliff” will help make up lost revenue for his trust and estate practice.

While many lawyers are aware of emergency precautions they need to take to back up their files and client needs, solos may be especially vulnerable to the financial impact of natural disasters.

New York City lawyer Richard Bryan, for example, has lost touch with a number of clients who were displaced—possibly permanently—by the hurricane. Bryan markets his services to the 30,000 residents of Peter Cooper Village and Stuyvesant Town, a Manhattan apartment community where he also lives. The community suffered extensive damage from the hurricane.

“It really killed me,” says Bryan, whose office was closed for a week. “The estate planning and Medicaid planning I had been working on with these people is on hold.”

Bryan estimates he gave up more than a week’s revenue. He is trying to offset the loss by putting in longer hours and accepting work in less familiar practice areas such as family law.

Similar scenarios played out throughout the region, particularly the hardest-hit states of New York, New Jersey and Connecticut. Solos—often lacking the cash reserves that larger firms hold—struggled to make up for hits to the bottom line and to keep their doors open.

In an ideal world they should have three to six months of working capital to draw on for emergencies, depending on their practice, according to Chicago accountant Ruth Goran, who works with many attorneys.

She acknowledges, however, that this is a luxury many cannot afford. “If you have a natural disaster, that might not be enough.” One solution is to arrange a working capital loan or line of credit.

Such solutions are likely little consolation now for West Milford, N.J., solo Laura Mann, who lost two weeks’ worth of work largely due to storm-related problems affecting clients. She says her business interruption insurance doesn’t account for such circumstances.

“Because my building did not lose power, it’s likely there will be no coverage,” says Mann, whose assistant quit without notice to help relatives dealing with storm damage. “Really, there’s no telling the long-lasting repercussions because there’s no telling how many clients are not calling.”

To be sure, it may be well into the new year before business for these and other storm-affected attorneys takes on a semblance of normalcy.

“There’s a trickle-down effect—people who are without the ability to come to court,” says Kevin McCann, president of the New Jersey State Bar Association.

“Cases get postponed,” he adds, noting that several of his adversaries were unable to make their court dates. “It will postpone the income.”