Fairness is an issue in clearing low-level marijuana convictions

In 2012, only two states, Washington and Colorado, allowed the recreational use of marijuana for adults. Just eight years later, marijuana laws are flying high: Eleven states have legalized recreational pot, and 33 states allow cannabis for medical use.

But as legalization speeds ahead at a breathtaking pace, states are confronting a fundamental issue of fairness: A product that is now perfectly legal within their borders is the same substance that once brought criminal records and even jail time.

That sense of inequity is placing expungement programs on numerous states’ legal agendas.

For many people—especially those in black and brown communities hit hard by the “war on drugs” of past decades—old arrests and convictions for minor amounts of pot are still haunting them whenever they fill out a job application or apply for an apartment.

“Millions and millions of individuals have been arrested and have these records following them for the rest of their lives,” says Justin Strekal, political director for the National Organization for the Reform of Marijuana Laws.

Illinois was the first state to insert expungement language in a statute legalizing recreational use of cannabis for adults. The Cannabis Regulation and Tax Act passed in 2019. Some other states have addressed expungement after the fact. Illinois joins more than a dozen states—some of which have legalized adult recreational use, all having legalized medical use—that have passed laws to expunge marijuana crimes.

In four states—California, Illinois, New Jersey and New York—expungement for minor pot crimes is automatic under certain criteria, with the burden falling on the state to make it happen. In other states, the person with the criminal record must proactively apply.

Several other states are considering creating expungement programs for past marijuana crimes, including Florida, Michigan and Virginia.

Illinois as a case study

The Illinois law, which legalized the sale of cannabis statewide as of Jan. 1 and sets aside retail licenses for people affected by past punitive drug laws, requires the automatic expungement of minor weed-related offenses. Those are defined as nonviolent crimes involving the possession, manufacturing and distribution of less than 30 grams of pot.

People with an Illinois record for possessing larger amounts of pot aren’t eligible for automatic expungement, but they may still petition courts to vacate.

“Illinois put a stake in the ground,” says the state’s “cannabis czar,” Toi Hutchinson. “You cannot talk about the normalization or legalization of an activity that is the exact same activity that destroyed whole communities for generations” without undoing some of that damage, she argues.

Proponents say having a criminal record for weed can prevent a person from getting hired for a better job, renting a nicer apartment, winning a child custody case or accessing student aid.

And there are even more ripple effects, says Strekal of NORML, such as missing out on better health insurance that comes with getting a better job. “That creates a longitudinal decline in their overall ability to find gainful employment and make money to be a functioning member of their community,” he says. 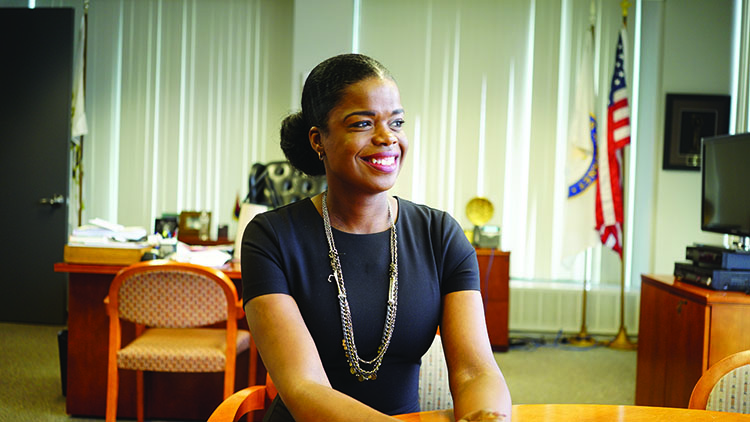 Cook County State’s Attorney Kim Foxx has championed the expungement provisions in the new Illinois law. Remembering her childhood in the Cabrini-Green housing project in Chicago, Foxx says her mom used marijuana almost daily, something that embarrassed Foxx greatly when she was young. What Foxx didn’t understand until reaching adulthood was that her mom was self-medicating for her bipolar disorder. “She would say, ‘This calms me down. This keeps me even.’ “

“When I became a prosecutor … it was always not lost on me that here I was, giving people records when my mother was doing the same thing,” Foxx says. When she was elected in 2016, she decided to focus on undoing that unfairness. “For me, this is easy. This was an unjust law targeting black and Latino communities,” she says.

Using a provision in the new state law that allows counties to address minor pot convictions in their jurisdictions, Foxx forged ahead. In December, she brought the first 1,012 automatic cases before the circuit court’s chief judge and got them vacated.

Later that month, she and other dignitaries celebrated at a South Side church. One man in the crowd gave Foxx a hug, telling her how uneasy he was every time he filled out a job application. “He was there with his mother, and he said, ‘You have no idea what that conviction means for me,’ ” she says. “He was weepy about it.”

At least 700,000 people with minor records for marijuana in Illinois are thought to be eligible for expungement.

Nationwide, millions of Americans have records for possession of marijuana, but according to a 2013 report by the American Civil Liberties Union, blacks are on average 3.73 times more likely to be arrested for marijuana possession than whites, even though both groups use pot at similar rates.

One challenge is dealing with the actual records and notifying the people who qualify for relief. Depending on the jurisdiction, court files may be fully digitized or papers stored in a cabinet. Unique to Illinois’ Cook County, the automatic process goes a step further and results in a judge vacating the conviction and destroying the court file, so it’s as if the offense never happened. The county also is speeding up the process of delivering documents to the judge by partnering with the San Francisco tech nonprofit Code for America to put digital court records into the necessary forms. Other counties in the state are going through a lengthier process.

There’s also the issue of access to lawyers. People with a conviction for weed may not be able to afford legal representation, says Maritza Perez, director of national affairs for the Drug Policy Alliance, which advocates for more liberal drug laws.

For many, getting a minor marijuana conviction erased is just a first step, says Esther Franco-Payne, executive director of Cabrini Green Legal Aid in Chicago. Most clients have more than one bad mark on their record, as decades of draconian drug laws pushed people into other illegal behaviors.

The tension between state and federal cannabis laws also needs to be resolved, says University of Denver law professor Sam Kamin, a marijuana law expert who has advised policymakers.

The federal government still considers marijuana to be a Schedule I drug—like heroin and ecstasy—under the Controlled Substances Act. Until that changes, states can’t be sure the government won’t go after them, as then-U.S. Attorney General Jeff Sessions tried to do at the beginning of 2018. Last year, the ABA House of Delegates called for pot to be removed from Schedule I.

But those pushing for nationwide legalization are more hopeful now. In November, the proposed Marijuana Opportunity Reinvestment and Expungement Act, which would remove pot from Schedule I, passed out of the House Judiciary Committee on a bipartisan vote of 24-10. The bill has more than 50 co-sponsors in the House. Besides decriminalizing marijuana, the MORE Act would create a federal grant program to help state and local authorities develop expungement programs.

Perez hopes someday pot convictions will be considered no big deal. For people with previous marijuana convictions, she says, expungement “means that they’re no longer held back by a scarlet letter that affects every area of their life.”

This article was originally published in the April/May 2020 issue under the headline, “Expungement Haze: Fairness is an issue in clearing low-level marijuana convictions.”