Inspired by Netflix, Fastcase is creating its own content 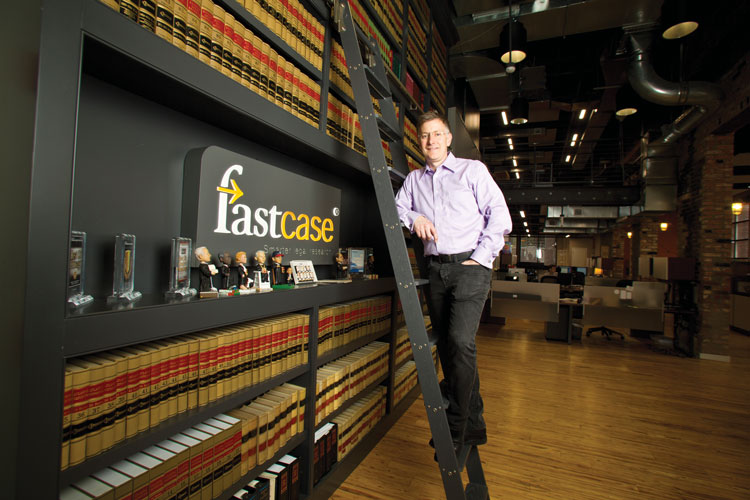 Ed Walters, CEO at Fastcase: “We don’t want to be like every other journal in the world.” Photograph by Arnold Adler.

As anyone in publishing will tell you, print is out and digital is where all the action is.

Of course, another well-known adage is “What’s old is new again.” That seems to be the one that legal research provider Fastcase relied on when it decided to launch its latest venture.

In January, Fastcase, which serves more than 800,000 subscribers, launched RAIL: The Journal of Robotics and Artificial Intelligence & Law—a print publication available via subscription. The journal, which features law review-style articles and commentary from experts in the legal tech field, will be published six times per year and be the flagship publication for Fastcase’s new publishing arm, Full Court Press.

According to Fastcase CEO Ed Walters, the “back to the future” venture is an example of being somewhere others aren’t. “We’ve always been zigging when everyone zags,” says Walters, who decided to launch RAIL because he and others at Fastcase were interested in the topic and because he teaches a law of robots course at the Georgetown University Law Center.

The company also was inspired by a 2009 article by Malcolm Gladwell, “How David Beats Goliath.” Walters says, “It’s the story of a basketball coach who couldn’t teach his players to jump higher, so he taught them how to do a full-court press defense on every inbound. When he was accused of cheating, he said, ‘I’m just not playing your game.’ ”

Walters also points to Netflix as an inspiration. “While Netflix started out as an aggregator of movies, they said over the long term we’re going to create our own original content,” Walters says. Like Netflix pre-House of Cards, Walters found that users had to rely on other services when they hit the limit of what Fastcase provided.

“There are more than a million searches on Fastcase every week,” Walters says. “But when lawyers need expert commentary about the law, they need to stop using Fastcase and go somewhere else. For the future, we needed to make the Netflix kind of move, and that’s where Full Court Press comes from. We will be our own publisher with our own content. We know what people are searching for, so we can publish treatises targeted to people’s interest. We can marry our catalog to their searches.”

How much of Fastcase’s audience will be tempted by the chance to curl up with a journal about robotics and AI? “I don’t know what the readership for RAIL will be,” Walters says. “We don’t want to be like every other journal in the world—we want to do it differently.”

Among the book lovers at Fastcase is Steve Errick, chief operating officer.

“I was at a tech conference recently, and everyone was saying there’s not a lot being written about artificial intelligence,” says Errick, former managing director of research information at LexisNexis and owner of Book and Leaf, a bookstore in Brandon, Vermont. “I’m starting to hear from authors who want to bring their books to us. We’re looking to publish books that will be a combination of print, e-books and online. In addition, print publishing is much more affordable. You can print for a third of the price 10 years ago.”

Hugh Logue, director and lead analyst at Outsell, a research company based in Burlingame, California, wrote an article in November in which he claimed the market for printed publications may be boosted by “screen fatigue.”

“Fastcase’s strategy to introduce books in the legal space is a timely move, ... as consumers increasingly look to switch off from the pressure of social media and electronic devices in their downtime,” Logue wrote.

He cited a recent Publishers Association survey that reported in the United Kingdom, sales of consumer e-book titles decreased by 17 percent to 204 million pounds in 2016, the lowest level since 2011, while print book sales hit a five-year high.

Logue also pointed to a 2016 Pew Research Center study, which reported that 65 percent of Americans read a print book in the previous year, more than double the rate for e-books and quadruple the rate for audiobooks.

Can print publications be successful in a digital-dominated media landscape? Logue says, “The growth of digital content does not need to be at the expense of print. Under pressure to hit targets to increase digital usage, for the last decade or so, commissioning editors have developed a lot of poor-quality digital content.

“There are now countless blogs that never get updated, podcasts that go unheard, and dull videos of lawyers reading a monotonous script to camera. This is digital for digital’s sake and a complete waste of time. The good editors are now the ones returning to print and figuring out how to make it work in a mixed media world,” he adds.

RAIL will be available online and in print. “Autonomous Vessels: How an Emerging Disruptive Technology Is Poised to Impact the Maritime Industry Much Sooner Than Anticipated,” “Use of Drones for Conservation Surveillance—Benefits and Regulatory Hurdles in the United States,” and “What Is a Robot (Under EU Law)?” are some of the articles in the first issue.

“Books need to be more,” Walters says. “You can have paper books that point you online where you can download forms, download cases and use hyperlinks. What an opportunity for 21st-century legal publishers. It’s a very exciting time.”

This article was published in the April 2018 issue of the ABA Journal with the title "Fastcase and chill: Inspired by Netflix, the legal research service is creating its own content by relying on an old, possibly outdated model."