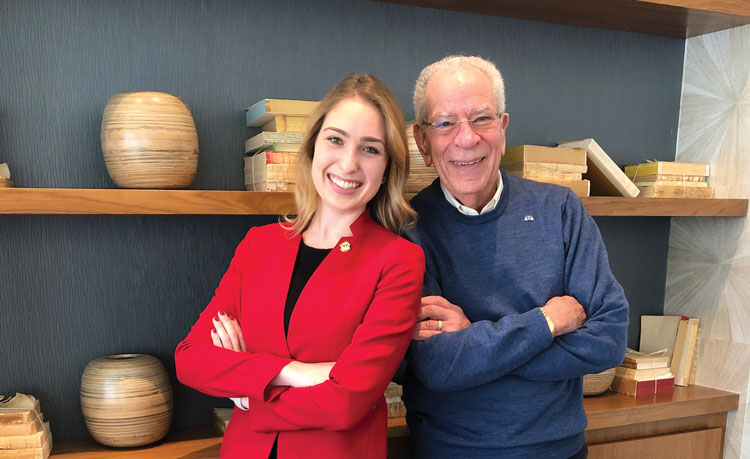 “It has taken me a lifetime to get to the House of Delegates, and now I have to answer to my daughter, who is on the Board of Governors,” says Michael Posner (right) of Michaela Posner. “It’s pretty unique.” Photo by Amanda Robert

Michaela Posner wasn’t even 6 months old when she attended her first ABA meeting.

Her father, Michael Posner, was active in the Section of Labor and Employment Law. He told his wife, Cassandra, that its 1997 midwinter meeting would be in Puerto Vallarta, Mexico. They decided to go as a family to see how their daughter traveled.

“She handled it beautifully,” he says. “And after that, every meeting, we took Michaela with us. She has been an ABA baby for a long time.”

“It was a family vacation with a name badge,” Michaela Posner adds.

More than 20 years later, the father-daughter duo from Southern California has taken their ABA participation to a new level. Michael Posner was serving as a section delegate to the House of Delegates in April 2019 when Michaela Posner was elected as the law student at-large on the Board of Governors. In that role, she also serves as a voting member of the House.

“It has taken me a lifetime to get to the House of Delegates, and now I have to answer to my daughter, who is on the Board of Governors,” Michael Posner says. “It’s pretty unique.”

And while it is an unusual situation, it’s not unheard of: Fritz Langrock serves on the Board of Governors, and his father, Peter F. Langrock, is a state delegate for Vermont.

Keith Frazier, who also serves as a Section of Labor and Employment Law delegate to the House, has known Michaela Posner since she was about 5 years old, and he wasn’t surprised when she followed behind her father.

“Mike is very public service-oriented, and he wants to give back,” says Frazier, a shareholder in Ogletree Deakins’ Nashville, Tennessee, office. “That’s something that, when you talk to Michaela, you immediately pick up. That has been instilled in her.”

Michael Posner started his career as a junior high school teacher, but he decided to pursue law after a mentor suggested he consider his future.

“He said, ‘Look around, look at all of the guys who teach and are 20 years into it, and ask yourself if that’s where you want to be,’” he says. “That was a shock, because I had no ambition to go into administration.”

He graduated from Loyola Law School in Los Angeles in 1968 and got a job at the Los Angeles City Attorney’s Office. He handled criminal cases for about a year until a judge asked if he’d ever thought about being a labor lawyer. He hadn’t, but he realized he felt strongly about protecting workers and unions.

Michael Posner says he is “still widely enthused” with his practice. Although he retired from Posner & Rosen, the firm he co-founded in Los Angeles in 1985, he continues to represent longtime clients such as Pasadena’s firefighters union.

Michaela Posner remembers always meeting her father at the door when he came home from work. Even as a kid, she knew she wanted to be just like him.

“My mom was cleaning out the cupboards in the house last year and found a paper from 2002 that said, with horrible spelling, ‘I want to be a lawyer so I can help people who have been fired,’” she says. “I think that’s so funny because at that point, it was, ‘I just want to do what my dad does.’”

She went with her father to his office beginning in middle school and attended Cornell University to study industrial and labor relations. After graduating in 2018, she started at the University of California at Irvine School of Law.

Michaela Posner has often helped her dad prepare clients for Skelly hearings, which are provided to public employees in California before they receive discipline. During her first semester of law school, she also assisted in filing an unfair practice charge to the Public Employment Relations Board.

Cassandra, Michaela and Michael Posner visited Glacier National Park after the 2019 Board of Governors meeting in Missoula, Montana. Photo courtesy of the Posner family

Last summer, as she clerked for an administrative law judge at the Equal Employment Opportunity Commission in Los Angeles, her dad again asked for her help with that case. Since she had already done the research, he convinced her to draft the brief.

“The experience she had as a law clerk was so profound because the draft she produced was unbelievably good,” he says. “We had just a few conversations and modifications, submitted the brief, and we won.”

Michaela Posner was only 90 miles away from her parents until COVID-19 forced students off campus in March. She returned home to finish her 2L year.

“I’m the kind of person who definitely prefers a physical learning environment, so finishing up the semester online was far from ideal. Although frankly, I’m just happy I was able to finish and stay on track to graduate next year,” she says.

After growing up around the ABA, Michaela Posner knew she would join as soon as possible. When she saw the open Law Student Division position that would allow her to sit in the House of Delegates, she couldn’t resist that opportunity.

“I thought it would be fun to be in the House with my dad because you sit by state, and I would finally be back in California after four years in New York,” she says. “I said, ‘Well, I’m going to go for it.’”

She attended her first Board of Governors meeting in Missoula, Montana, in June 2019. In a role reversal, she invited her parents.

“After all of the years of my wife and I attending ABA meetings and taking Michaela, she came to us and said, ‘Would you guys like to come with me to Montana?’” Michael Posner says. “So we did.”

As they plan to attend the ABA’s first virtual annual meeting in August, the Posners say they will most miss seeing their friends and colleagues in person. Although Michael Posner expects that remotely convening the nearly 600-member House will be an interesting experience, Michaela Posner hopes more law students will participate if they don’t have to pay to travel to the meeting.

When considering why they became so active in the ABA, both contend it was to help direct the future of their profession.

“If you sit on the sidelines, you have no voice in it,” Michael Posner says. “I’ve always been the type of person where I can’t just sit and listen. I like to be a participant.”

“The country looks to the ABA to speak on behalf of the profession,” Michaela Posner continues. “In order for that voice to be powerful and accurate, we need people to get involved. And it’s not like there is a lack of opportunity to step up.”

After her one-year term ends in August, she will become the Law Student Division liaison to the Section of Labor and Employment Law—and continue to serve alongside her dad.

“We can sit on the labor and employment council together,” Michaela says, looking at him. “You just can’t get rid of me, sorry.”

This story was originally published in the August-September 2020 issue of the ABA Journal under the headline: “Family Ties: Father-daughter duo serves together in ABA leadership.”

Updated on July 28 to clarify that the House of Delegates has nearly 600 members, and to correct a photo caption.