Lawyer with autism finds her voice 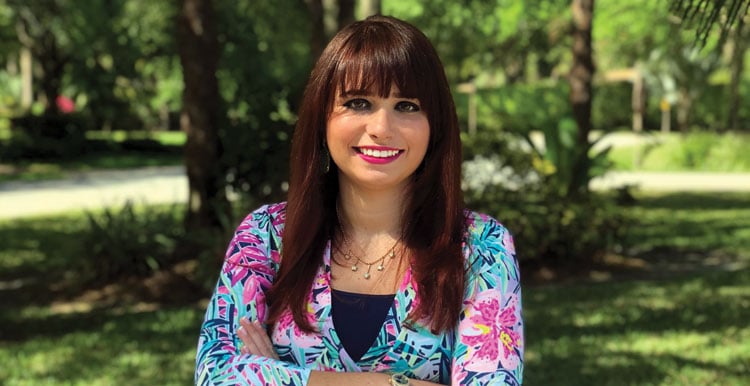 Diagnosed with autism as a child, Haley Moss shattered disability stereotypes when she obtained her law degree. Photo courtesy of Haley Moss

#MyPathToLaw is a guest column that celebrates the diversity of the legal profession through attorneys’ first-person stories detailing their unique and inspiring trajectories.

I used to think it was easy to identify young people who would grow up to become lawyers. They supposedly are the sociable toddlers in the playgroup, the smart aleck who found a flaw in the reasoning behind a teacher’s “because I said so,” the captain of the speech and debate team who could argue any position, the high school theater kids who completely transform into their characters onstage and feel all of their emotions, or the incoming college freshmen who boldly declare their intent to major in political science and become a lawyer.

I was none of those kids.

I was the child playing by myself in preschool who was eventually asked to leave after failing at coloring inside of the lines. I was the quiet girl in class who usually knew all of the answers but didn’t raise my hand and would not dare challenge a teacher’s authority. I was the president of the art club and could often be found with my sketchbook in hand. My drama days ended in the fifth grade. As an incoming college freshman, I was going to major in psychology and one day, maybe, become a psychiatrist.

I was wrong that it was easy to identify future lawyers.

When I took the oath of attorney a few months ago, my swearing-in ceremony featured a discussion surrounding the faculty of speech. The judge explained how as lawyers, we take being able to speak and advocate for ourselves and for others for granted.

My family never once took my speech for granted.

I was diagnosed with autism in 1997. The late 1990s were a time where we didn’t see autism as the alarming 1 in 59 children diagnostic rate we hear about today. The handful of recognizable autistics included “Rain Man” and Temple Grandin—neither is fully representative of autism. I was 3 years old, and I wasn’t speaking. While all of the other kids were learning to ask for treats and had moved past relying on their parents, I hadn’t quite gotten there yet. I was pointing at objects and crying and screaming constantly as my means of communication.

When my parents first learned I was autistic, they were given limited possibilities for my future. My parents were told it would be a success if I made a friend or landed a minimum-wage job. The list of other things I would not, could not ever accomplish was much longer.

Thankfully, my parents did not accept the negative prognosis and stigma about autism as a life sentence for me. They dared to dream and were the ones who said “yes” when the rest of the world said “no,” so we got on the ground to work.

Different interventions and therapies became part of my childhood. I learned how to speak through playing with different toys, worked with occupational and speech therapists, and I even rode horses. A lot of my early language was echolalia—speech patterns and phrases often learned from other people, books, movies or television. It wasn’t until about the first grade that the words I was speaking were mostly my own.

Knowing there was a time where my only means of communication were not through writing or speaking makes me never once take for granted what I can do in practice.

I’ve always been a writer since it felt more natural to me when using my spoken voice did not always feel as natural. My first book was published when I was 15, and my second when I was a sophomore in college. I had found my voice in autism advocacy and was sharing my story and artwork throughout my teenage years.

But being a lawyer was out of the cards until I was in college. According to most, college would be an uphill battle. I was excited to enroll at the University of Florida, a school four hours away from home. I had never been to sleep-away camp before, let alone been on my own and with around 50,000 students (my high school graduating class was about 210 students). Sometime during my freshman year, I discovered I did not have the knack or passion for chemistry and the sciences to become a psychiatrist.

I majored in psychology because I believed as an autistic person who does not naturally understand people, what better way to understand others than the logical workings of the human brain. I also discovered there are three things I enjoyed and would be happy to do for the rest of my adult life: write, talk and somehow give back to my community. I chose law because lawyers do written and oral advocacy, and they have the potential to make a difference daily.

I graduated from law school a little more than a year ago. Outside of the congratulations for passing the bar exam, I am frequently asked what kind of law I practice. I’m always met with surprise every time I say my practice focuses on health care and anti-terrorism matters.

I’ve learned this is because of the various stereotypes and boxes society likes to place people with disabilities into; the assumption is that, of course, I work in disability rights litigation or am a special education attorney. I do know lawyers with disabilities who practice in this arena and respect them all greatly. It is just a misguided stereotype that every single one of us, no matter how passionate or varying our interests are, will do legal advocacy on behalf of others with similar life experiences.

I am passionate about disability rights and advocacy. I am openly autistic and proud. I don’t have to be a disability rights or special education attorney to do what I enjoy. And whether I am practicing law or involved in autism advocacy, I never ever forget the blessing of being able to use my voice—written and spoken—for the benefit of others.

This article first appeared in the September-October 2019 issue of the ABA Journal under the headline “Finding My Voice.”

Haley Moss is an associate at Zumpano Patricios and a 2018 graduate of the University of Miami School of Law. She wrote A Freshman Survival Guide for College Students With Autism Spectrum Disorders: The Stuff Nobody Tells You About and serves on the board of directors of Different Brains.