Finding Your Why: Present Your Case So That It Fits What the Jury Wants to Believe 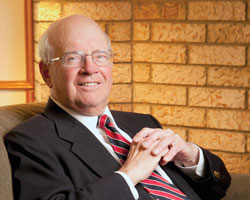 Editor’s Note: Jim McElhaney’s 25-year run as Litigation columnist for the ABA Journal will come to a close in the fall. During those years, McElhaney’s straightforward advice on trial practice became one of the most popular features in the magazine. To commemorate McElhaney’s contributions, the Journal is reprinting some of his “greatest hits” from the past quarter-century. This article originally appeared in the Journal’s August 1995 issue under the headline “Finding the Right Script.”

“You don’t understand,” said Regis McCormick. “My client is telling the truth. The security guard followed him out of the store and jumped him. Kicked him. Then shot him.”

“But it doesn’t fit,” said Mudger. “Why would a 57-year-old security guard with a bad back deliberately follow a customer out of a store, pick a fight with the customer and then shoot him? I don’t believe it.”

“I don’t know,” said Regis. “How should I know why irrational people do the things they do? All I know is that this security guard thinks he’s Rambo or Clint Eastwood or somebody, and he shot this customer for nothing.”

“Just my point,” said Mudger. “Rambo and Eastwood don’t go around shooting people just for the fun of it.”

“Well, maybe they don’t, but this security guard sure did,” said Regis, “and that’s all I care about.”

That’s when Angus joined in. “You know, Regis, legally you’re absolutely right. You don’t have to know why this security guard shot your client. Motive is not a part of what you have to prove to get your case to the jury.

“But juries care about motive. They’re reluctant to believe that people do bad things—or good things—for no reason. Motive is one of the key factors that people have in the scripts they use to test whether they’re going to believe what they hear.

“Motive, just like bias and credibility, is never collateral,” said Angus. “It’s almost always admissible because people attach so much significance to it. If you can show what reason the security guard had for shooting your client, the jury is more likely to believe he did it.”

Regis McCormick’s case is interesting. His client, a truck driver named Roy Huggins, went to a convenience store one evening to pick up some milk and cereal for the next morning, along with some beer and snacks because he and his wife were planning to watch late-night TV.

Huggins was alone in the store with the security guard and the store clerk when the guard, Ralph Wheeler, accused him of trying to shoplift. Wheeler was certain he saw Huggins slip a flashlight off the rack and into his pocket, and the two got into an argument.

When Wheeler searched Huggins, he found no flashlight. When Huggins finally left the store, the argument continued, and they got into a tussle in front of the store. That’s when Wheeler’s gun went off, and the bullet struck Huggins in the leg.

Who shot the gun: Wheeler or Huggins?

The clerk stayed inside the store and couldn’t see what happened because of all the posters and ads on the windows blocking his view. Besides, it was dark outside and light inside, so it was hard to see out.

“You know,” I said, “I think there’s more to this case than just motive.”

“Not a bad observation for a law professor,” said Angus. “A lot of it depends on how people feel about the police.”

“You weren’t listening right,” said Mudger. “This was a security guard, not a cop.”

“I agree with Dick on this one,” said McCormick. “There’s a lot of difference between a cop and a security guard.”

“Even so, I think Angus is right,” I said. “This case is really about the police and how your inner scripts interpret this story. As far as your personal scenarios are concerned, a security guard can be pretty close to a police officer.”

If you grew up with me in Shorewood, Wis.—a comfortable little village just north of Milwaukee—and went to Atwater Grade School, you would have had Mrs. Blum for morning kindergarten and learned about the police from her.

Mrs. Blum wanted to teach us how to cross the street. She had made a traffic signal out of two round pieces of construction paper stapled to a tongue depressor. It was green on one side, red on the other. And she had a whistle and a policeman’s hat that a former student had given her.

She would have the whole class march around in a big circle as long as she held up the green sign. Then she would blow the whistle, turn the sign around so it was red, and everybody had to stop marching.

If you went to Atwater, you grew up thinking that the police were as nice as Mrs. Blum, and that their job was to keep kids safe and help them cross the street. That is still my primary scenario for what the police are like.

But suppose I had grown up in a poorer part of Milwaukee. I didn’t have Mrs. Blum for kindergarten. My first exposure to a cop was someone who broke in the door, threw my father up against the wall, handcuffed him and took him away while my mother cried. And suppose all my friends said the police pushed people around for no reason.

A secondary scenario, further on down, would be of police officers as people who risk their lives to protect others. Even if I didn’t really like the police, I would still dial 911 in an emergency.

All right, you say, people have scenarios—inner scripts—that they use to process facts. But how does that help me try cases? Good question.

First, don’t think you can rewrite the stories people carry around in their heads with an hour of preaching during jury selection and opening statements. It won’t work. You’ll just succeed in convincing the judge and jury that you’re selling something they don’t want to buy.

Which is why you want to spend more time listening than talking during jury voir dire. You want to find out how the jurors feel about the things that are basic to the case you’re trying.

Second, some of our scenarios are personal, others are regional and cultural. Most of them come from a combination of factors that are lost to conscious memory but still have a strong influence.

The police script is a good example. Would it have been as powerful if Mrs. Blum didn’t have the hat and whistle? Or the red-and-green sign? And how much of that scenario comes from growing up in a sleepy little middle-class village that could go for years without a felony being committed inside its boundaries?

Third, some scenarios are nearly universal, even if only partly rational. For example:

• “Motorcycles are incredibly dangerous. Motorcycles are ridden by gang members who rape and kill. Whatever happens to motorcyclists, they have it coming.”

• “Private airplanes are as dangerous as motorcycles and also run the risk of crashing into commercial airlines. They are rich folks’ toys and shouldn’t be allowed to fly anywhere near a real airport.”

• “Trucks are too loud, too fast, a traffic hazard, and are driven by people who would just as soon squeeze you off the road.”

But whatever scripts people have, don’t fall into the trap of thinking they automatically will decide the case. People often have two or three scenarios that could apply to a given situation—and sometimes one is quite inconsistent with another.

It’s your job to present your case so it starts the right films running in the jurors’ minds. But even when the right picture is playing, it will go only so far in explaining what happened.

Returning to motive, trial lawyer Eric Kennedy says, “We think our job is to prove what happened. But to persuade, you have to prove why it happened.

“Take a medical-malpractice case where the evidence is absolutely crystal clear,” says Kennedy (now managing partner at Weisman Kennedy & Berris in Cleveland). “The doctor should have ordered a CT scan, but she didn’t. So the doctor failed to diagnose a cerebral aneurysm that could have been treated, but which killed her patient.

“Are you going to win that case? Jurors like doctors. They want to believe that the doctor did the right thing. Here is an intelligent physician who did not order the right test. Was that a mistake? Of course. But the point is, it’s not enough to prove what the doctor did. You need to explain the failure. Unless you show why, the jury may not believe the doctor actually did the wrong thing.

“Maybe the office was too busy. Maybe they were short-staffed. Maybe, as in some prepaid health care organizations, the doctor’s income is tied to profits the organization makes. Then there is an economic incentive not to order extensive medical tests.

“I always look for why,” Kennedy says. “It explains the mistake.”

See how this fits in with the jurors’ scripts? Doctors have special knowledge. They are good people who try to do the right thing. This scenario doesn’t decide the case, but it changes the way the jurors look at it. Their attitude makes them need more evidence—such as a motive—to convince them that what happened is real.

It’s the same situation with truck driver Huggins and the security guard. For those who think the police are violent people, that is the “why”—they don’t need any more. But the folks who had Mrs. Blum for kindergarten need something more.

Regis McCormick closed his briefcase and stood up.

“Where are you going?” said Dick Mudger.

McCormick smiled. “I need to find some more ‘why.’ ”