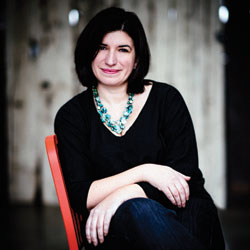 Kathryn Hickner-Cruz: “We’re definitely not going to drop coverage just because we don’t need to provide it.” Photo by Joe Vaughn.

As some Americans saw health insurance policies canceled because they don’t meet the standards of the Affordable Care Act and others struggled to sign up for coverage at healthcare.gov, law firms began to gear up for some of the same changes, depending on their size and other factors.

The megafirm Baker & McKenzie, exponentially beyond the 50-employee threshold that triggers the employer mandate starting in 2015, already has implemented much of what the ACA requires as part of health plans, says Ed Burmeister, chair of Baker & McKenzie’s international benefits committee.

“Our philosophy has been to be a little bit ahead of the curve on as many of these things as possible,” he says. “It doesn’t make sense as a very large, global law firm to pay people the kind of salaries we pay, at least the attorneys, and then to be stingy on benefits.”

Among the new benefits provided by Obamacare, the firm already has eliminated the lifetime limit on coverage, covered adult children up to age 26, and protected children up to age 19 from being dropped due to pre-existing conditions, which will “go across the board” as the ACA takes effect, he says. The firm probably wouldn’t have done the latter without the law, Burmeister adds.

The main effect on the firm will be new fees, such as a transitional reinsurance fee of $63 per person, which will add up at the 2,000-employee firm. But Burmeister thinks that fee and others will add up to no more than $300,000 for a firm that already spends $13 million annually on health care. Baker & McKenzie’s open enrollment won’t happen until April, but the firm doesn’t anticipate rates of increase in premiums much higher than the 5 percent to 6 percent employees faced last year, he adds.

Smaller firms like the Health Law Partners in Southfield, Mich., with about 20 attorneys and fewer than 50 employees overall, will not be required to provide health insurance. But smaller firms that do will want the same standards with their plans, says Kathryn Hickner-Cruz, a partner: “We’re definitely not going to drop coverage just because we don’t need to provide it.”

The firm’s insurance plans do not meet the requirements for coverage, so Blue Cross/Blue Shield is redesigning those plans to make sure they comply for the sake of the firm’s lawyers and support staff, Hickner-Cruz says. Individuals are required to have coverage that meets those standards.

“They’ll tell us which new plan matches the one we have most similarly,” she says. “It doesn’t affect us very much.” She adds that the changes are relatively minor, such as adding vision coverage, for example.

AND IN THE MIDDLE …

The employer mandate could provoke changes for midsize firms like Waller Lansden Dortch & Davis, with 175-plus attorneys in Nashville, Tenn., Birmingham, Ala., and Austin, Texas, says partner Shannon Goff Kukulka.

Given how expensive attorneys often are to insure, Kukulka says some firms might compare the coverage they provide to employees with what they might find on their health care exchange, “if we can get on healthcare.gov and see what they actually are.”

Her firm’s plans already meet all the coverage standards, but when Waller’s renewal comes due in June, Kukulka says “the biggest analysis that will happen internally here will be what are the anticipated increases in costs, how do they compare to the exchanges, and does it make sense to change how we provide coverage?”

American Bar Insurance, which sells insurance plans to ABA members, has set up a website to allow lawyers and firms to analyze and shop for plans.

Large and midsize firms also will need to pay attention to employee classifications among attorneys–stratified partnerships, for example, or those who are considered of counsel or senior counsel might lead to some confusion.

“Law firms have a certain way of classifying positions that didn’t have the health care law in mind,” Kukulka says. “We have to identify, ‘Is that done right for health care reform classification purposes?’ The employer mandate will be a challenge.”

Kukulka figures lawyers and law firms are unlikely to be cut much slack under the law. “There is an understanding that, as a law firm, you should know the rules and you should apply them,” she says. “You’re probably not going to be the beneficiary of a lot of mitigation if you’re found to have classified people improperly.”

This article originally appeared in the February 2014 issue of the ABA Journal with this headline: “Coping with Obamacare: Firm size is a key factor in what needs to be done.”