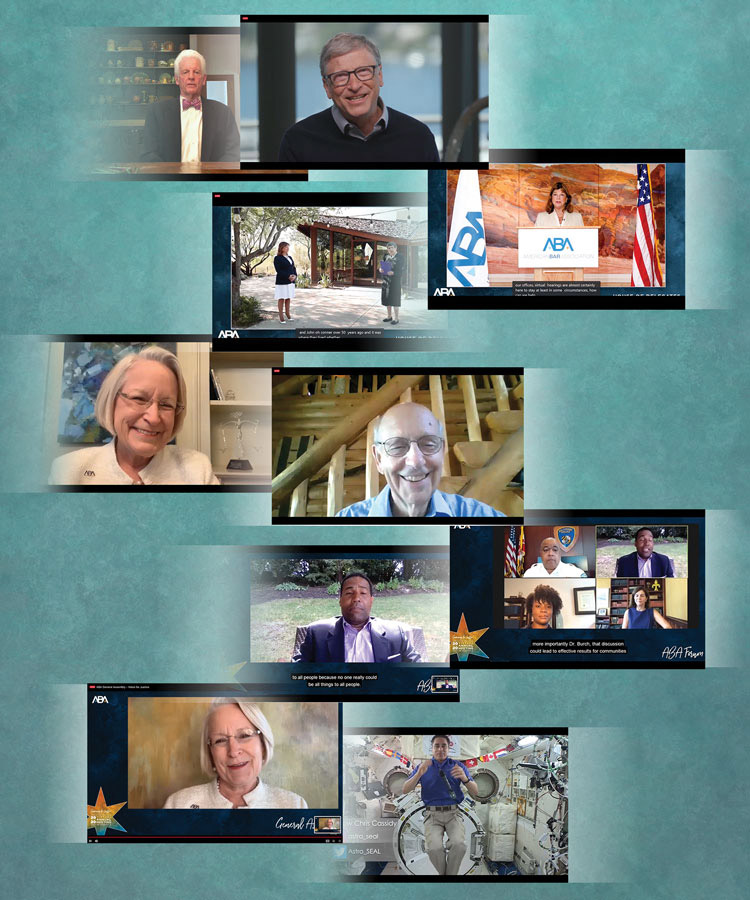 Just hours after the final bang of the gavel, Judy Perry Martinez answered the million-dollar question: How was the first all-virtual annual meeting in ABA history?

“I thought the meeting was a tremendous success,” says Martinez, who ended her term as ABA president at the close of the event. “I had high hopes for the meeting, and it was well beyond my expectations, both in terms of the sense of community that was present even though we were all remote as well as the quality of the substantive programming.”

ABA President Patricia Lee Refo, who received the gavel from Martinez during the final session of the House of Delegates, agrees that it was a “spectacular meeting.”

“Difficult circumstances for sure, but our staff and leadership did a terrific job in executing a meeting that did all the things we needed it to do and then some,” she says.

When asked about the most memorable moments during the virtual ABA Annual Meeting, which convened from July 29-Aug. 4, Refo says it started with NASA astronaut Chris Cassidy’s greeting to the General Assembly from the International Space Station.

Other highlights for her included appearances by U.S. Supreme Court Justice Stephen G. Breyer and Microsoft co-founder Bill Gates; the awarding of the ABA Medal to former ABA President William Neukom; and timely conversations on racial equity and the legal response to the COVID-19 pandemic.

“The thing that was noticeable was the opportunity to include in our meeting folks who might not be willing as speakers to fly to a distant city to be physically with us but were more than happy to participate in the meeting virtually,” Refo says.

Martinez similarly commends the meeting’s speakers, who “accepted our invitation and understood how important it was to the members of the association to hear these critical voices at this particular time.”

“They were nimble enough to work with us on the technology to make it all work from wherever they were,” she says.

Martinez credits Marty Balogh and the ABA Meetings and Travel Group for ensuring all the technology worked together. They used Zoom for several meetings and Remo for the President’s Reception. Also, Freeman was used for the General Assembly and House of Delegates, she says, and no one was disappointed.

“The preparation was so thoughtful and so creative,” she says. “We even had on the first day some minor technology challenges, but that afternoon, the team was already troubleshooting, and by the next morning, the technology that was delivered for the attendees was an improved experience.”

William Bay, the immediate-past chair of the House of Delegates, was also pleased with the virtual approach to the body’s policymaking sessions.

They moved to the electronic submission of salmon slips, provided the list of speakers to delegates ahead of time and used Election Runner as the online voting tool.

“People loved the voting,” Bay says. “They loved to get raw numbers. I had a big screen, and when the voting opened, it was in real time, and I could see the numbers going up, too. It made it much easier.”

Instead of standing before the 597-member House, Bay sat in a makeshift studio inside the ABA’s Chicago office. He spoke into a big microphone, with one screen that calculated votes on his left and a second one with his script and the order of business before him. Above that, he says, was the camera and another screen with the virtual meeting feed and group of speakers waiting to address delegates.

“I have a newfound respect for broadcasters and newscasters,” he says. “There was a lot going on, but it worked pretty well, and after a while, I got more comfortable.”

Bay adds that the new format made the House more accessible to speakers, especially as delegates debated resolutions on topics ranging from qualified immunity to guardianship.

Martinez shared several meaningful experiences with her colleagues, even though they couldn’t convene in one city.

These opportunities arose during the virtual tour of the “Notorious RBG: The Life and Times of Ruth Bader Ginsburg” exhibit; the first ABA Trivia Night; and her President’s Reception, where members could meet each other in different online rooms.

“One young lawyer reminded me that she had met me last fall when I was on the road for the ABA,” Martinez says. “She wanted to come by the President’s Reception to say hello and let me know she was able to make the ABA Annual Meeting because it was virtual.”

Even after the ABA can safely convene in person, Refo expects there will still be opportunities for members to participate virtually.

“It just makes the meeting that much more accessible for that many more people,” she says.

This story was originally published in the October-November 2020 issue of the ABA Journal under the headline: “It’s a Wrap: First all-virtual annual meeting highlights accessibility”