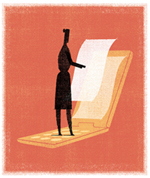 The most important technology tagline last year could well be the too-well-known “There’s an app for that.” Apple’s iPhone and App Store have opened the doors of possibility for mobile phones with surprising rapidity. So if you see your phone merely as a vehicle for calls and e-mails, you are missing the rise of the mobile platform.

Several developments have brought us here:

The result? The mobile phone has evolved rapidly from a voice device and e-mail pager to an always-with-us Internet device and computing toolbox.

WHAT LAWYERS NEED TO KNOW

There are several aspects to this change. first, we are seeing the reality of anytime, anywhere access: to the Internet, to work, and access to us for others. With each technology development (fax, e-mail, PDAs, instant messaging), lawyers have felt the pace of their practice speed up, and the demand to be available and respond quickly has increased. But we haven’t seen anything yet. In fact, the skill you will want to develop is how to manage this full-time access.

Also, we have rapidly moved from the time when it was adequate to record information on a mobile device and later synchronize it to a desktop or laptop computer or a network. Now there’s an expectation that we can use a mobile device to access information and networks in real time, skipping synchronization. This requires a rethinking and retooling of network and other infrastructure to support this type of access.

Third is the apps phenomenon. I’ve talked to a good number of lawyers who might be considered technophobes but who couldn’t be more enthusiastic about their iPhone apps. Because apps tend to be simple programs that address a specific need (e.g., locating the nearest ATM), they often let us easily accomplish something practical and useful.

How should you participate in the new mobile platform?

• See what you already have. Contrary to popular belief, you don’t need an iPhone to be on the mobile platform. BlackBerrys and other smartphones already have browser access, GPS services and app stores.

• Check out some apps. Nothing compares to the Apple App Store yet, but BlackBerry, Android, Nokia, Palm and Microsoft also have app stores. There are some great free apps. The ABA Journal even has an iPhone app. (See “70 Sizzling Apps,” ABA Journal, October 2009.)

• Advocate for mobile support from your firm. Let’s face it, firms have slashed hardware and software budgets. You probably won’t be getting a new laptop this year, but you might get a new smartphone.

• Understand and explore your needs. Mobile is an area of technology where you don’t realize that you have a need until you understand what’s out there. Even a simple application for timekeeping can have great benefit if it helps you contemporaneously track time that you might otherwise forget.

• Monitor developments. Much is happening in the mobile space. Google’s Android operating system is seen by many as an up-and-coming, serious competitor to the iPhone, and it already has some compelling apps. Expect continuing development and change.

The rise of mobile is a huge development in technology. It opens many new possibilities. There are advantages and disadvantages of anytime, anywhere access that we will have to sort out, but the benefits are striking and the pace of change is very rapid.

Lawyers should get on the platform before the train pulls out of the station.