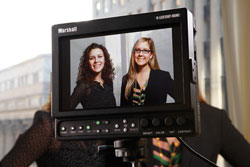 Believe it or not, online video is for more than seeing piano-playing cats or your favorite celebrity dancing Gangnam style. It’s emerging as a killer marketing tool for lawyers.

Just ask Gerald Oginski, a Great Neck, N.Y., solo who bounced back from a precipitous drop in billings by posting 600-plus marketing videos on YouTube. A $5.1 million brain damage case, a $395,000 sepsis settlement and a $495,000 bone infection mediation later, Oginski has become an evangelist for video marketing, which he says generates an unending stream of new business. “The majority of calls and emails to my office today start out this way: ‘Mr. Oginski, I just saw a video you did about this topic—can I ask you some questions?’ ” says the author of Secrets of Lawyer Video Marketing in the Age of YouTube.

Hordes of other attorneys are riding a torrent of video consumption on the Web, which is approaching Niagara intensity. According to the online metrics analyst ComScore, 181 million Internet users in the U.S. watched more than 39 billion videos in September alone, for almost 1,400 minutes of viewing time per user. And 88 percent of senior marketing execs say that simply by adding video, they’ve boosted results from their email marketing, according to a March 2012 Web Video Marketing Council survey.

“Video has all the elements that attract the human eye—the presence of sound, motion, color, a face and, if done properly, emotion and drama,” says Larry Bodine, editor-in-chief of Lawyers.com, who has more than a passing interest in the medium. Bodine built his own studio for video marketing and says he saw traffic spike fivefold to his blog last winter after promoting it with video.

“Video enables potential clients to know, trust and like you—the key elements of getting new business,” adds Bodine, a former editor and publisher of the ABA Journal. “Anecdotally, lawyers have told me they have known whether a caller has seen a firm video. If the caller has seen it, he is likely to become a client.”

Even some larger firms are heeding the siren call of online Hollywood. Chicago’s Levenfeld Pearlstein latched on to Web video so artfully, it won an award last March from the Legal Marketing Association. The firm sports dozens of attorney videos on YouTube.

Andrea Crews, director of marketing and business development, says, “Our three most popular videos are those that really provide some personal insight, memory or story, including Lisa Vandesteeg’s tour of her office, where Steve Bright would go if he could time travel, and how Dave Berzon deals with a difficult client.”

Nilan Johnson Lewis is another big believer in video marketing. The Minneapolis firm scored with a humorous video of its president jumping from a shower to answer a ringing phone—fully dressed in suit and tie. The catchphrase: “We are always ready and prepared to respond.”

Adds Mark Merenda, president of Smart Marketing in Naples, Fla., which specializes in legal marketing: “In the hierarchy of communication, face to face is best. But video is a close second. Video lets the potential client get to know the person—the attorney—who will provide the services, and to bond with that attorney in a non-intrusive way.”

For lawyers who are contemplating a foray into video, there’s lots of advice, but none is more frequently offered than this: Please, please don’t torture the world with another staid, insufferable talking head solemnly lecturing anyone and everyone on case law.

Instead, Crews says, ask yourself: “What would you like to watch? What grabs your interest, and what is useful?” Then, “once you think through what you might be receptive to, find a way to authentically represent yourself. Be you.”

Oginski, who also runs the Lawyers’ Video Studio, a business devoted to law firm marketing, notes that “when a viewer has a legal problem, they love learning about a story where the attorney has helped another person with a similar problem. Stories are very compelling and show the viewer that the attorney has experience with their particular problem.”