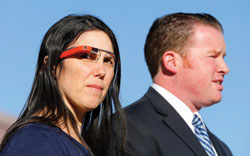 When California Highway Patrol officer Keith Odle pulled over Cecilia Abadie last October while driving along Interstate 15 in San Diego, he noticed something unusual: She was wearing a pair of high-tech glasses made by Google.

Odle ticketed the 44-year-old software developer for speeding and then issued her a second ticket citing her as in violation of a distracted-driving law. California Vehicle Code Section 27602 bans people from driving while video screens are operating in the front of the vehicle, except for mapping displays and other built-in screens.

But driving violations are only one example of the effects that Google Glass could have on the legal system. Like other new technologies, the device is poised to influence a wide swath of legal issues, including copyright infringement and privacy expectations. In many ways, says Vivek Wadhwa, a technology entrepreneur and fellow at Stanford Law School, the legal system is unprepared for the upcoming challenges. “Technology is moving faster than the ability of our laws to keep track of it,” he says.

Google Glass is a wearable computer that looks like a pair of glasses, except it has a small prism display that projects images to the wearer’s right eye. The device offers much of the same functionality as smartphones, allowing people to watch movies, check emails, take photos, and record audio and video. Unlike smartphones, however, the device is easily accessible. Glass wearers who want to, say, watch a video clip, need not fish a phone out of their pockets.

Glass also may record events more unobtrusively than smartphones do. Wearers need only give a verbal command or press a button at the top of the device to start recording. People who want to take photos can do so by winking with their right eye. Google Glass also can be outfitted to prescription lenses.

Abadie is among a small group of “Explorers,” early users who have already purchased the $1,500 device from Google. So far, the instruments are still a rarity, but later this year Google is expected to release the product widely.

Abadie fought the ticket, which was dismissed in January by San Diego traffic court commissioner John Blair. He ruled after a hearing that Odle hadn’t proved beyond a reasonable doubt that she was operating Google Glass while driving.

Abadie’s lawyer, San Diego-based William Concidine, says Odle testified about his observations but didn’t say whether he saw Google Glass turned on. “It’s not illegal to have those things in the car,” Concidine says of the devices. “It’s just illegal to use them while driving.”

While the case against Abadie was the first known instance of a Glass-related ticketing, it almost certainly won’t be the last. At least seven states—Delaware, Illinois, Missouri, New Jersey, New York, West Virginia and Wyoming—are mulling laws prohibiting people from driving while using Google Glass.

Many argue that driving with a wearable computer poses as much risk as texting or watching TV while behind the wheel. Others, however, question whether the advantages of Google Glass—like the ability to receive directions while driving—outweigh any risks. In fact, some say, technology has the potential to make driving and other activities safer and more efficient. Already, one developer has created DriveSafe, an app that aims to determine when drivers are falling asleep behind the wheel—and wake them up.

“Imagine if you had an app that monitors everything around you and tells you when you’re about to crash into something,” Wadhwa says. “Why should that be illegal?”

Besides, he adds, Google Glass is only the first wave of wearable technology. Computing devices will soon be so small that observers may not even know when people are wearing them. “We can’t go around chasing rainbows, as these officers are doing,” Wadhwa says.

For its part, Google says that wearers of the devices should “always use Glass legally and responsibly, and put their safety and the safety of others first.”

“It’s early days for Glass and we look forward to hearing feed-back from Explorers and others in advance of a wider consumer launch this year,” a Google spokesman told the ABA Journal.

Abadie isn’t the only Glass wearer to confront law enforcement officials. In January, a moviegoer in Columbus, Ohio, who was wearing prescription Google Glass was pulled out of an AMC theater showing the movie Jack Ryan: Shadow Recruit and detained for hours by agents from the U.S. Immigration and Customs Enforcement’s Homeland Security Investigations unit, which targets piracy.

The man was released, but an AMC representative told the media news outlet Variety that wearing a device with the “capability to record video” was inappropriate at the movies. The National Association of Theatre Owners said last May that it expects to develop policies regarding the use of Google Glass in theaters.

Another concern is that the devices will further erode privacy, since people wearing Google Glass may take photos or shoot video instantaneously. Some establishments, including a restaurant in Seattle, have banned people who wear the devices.

In some states, wearers who too quickly give Glass the command to record could potentially violate wiretapping laws, says Paul Alan Levy, an attorney with the Washington, D.C.-based watchdog group Public Citizen. Around a dozen states, including Google’s home state of California, require that both parties to a conversation consent to its recording, at least if the conversation occurs in a private setting.

Glass wearers who become accustomed to reflexively capturing their lives with the devices could end up violating those laws without realizing it. While the same could be said for smartphone users, most people don’t walk around with their phone’s video camera already pointed at a subject. “The whole purpose of Google Glass is to have it on all the time,” Levy says.

Google’s spokesman says the company “built in explicit signals—including voice commands or gestures, along with the screen lighting up—to make it clear to others when someone is taking a picture or recording a video.”

The devices also are seen as posing a privacy threat by making it harder than ever for people to remain anonymous. Earlier this year, one app developer designed a facial recognition app, NameTag, which allows Glass wearers to scan faces of strangers against known databases of faces. Google officially bans facial recognition apps on Google Glass, but people who tinker with the device’s software can get around the company’s policy.

In February, Sen. Al Franken, D-Minn., sent a letter to the app developer, Kevin Alan Tussy of FacialNetwork.com, urging him to delay releasing it or to revise the feature so it only identifies people who have opted into the database. So far, the developer has taken the position that it will allow people to opt out of being identified.

Not everyone is convinced that Glass will require a rethinking of the laws. Suffolk University Law School professor Andrew Perlman, himself an Explorer, says that many of the issues raised by the devices are similar to those first seen with the advent of smartphones. “Google Glass is closer to smartphones than smartphones were to anything else that preceded them,” he says.

He adds that many states already prohibit people from texting and driving. And piracy laws already apply when people use smartphones to copy movies in the theater.

Others say wearable technology will be so robust that laws stemming from the smartphone era won’t make sense. “We will have contact lenses that will have Glass types of tools in them, which will show us displays,” Wadhwa says. “One day, there will be retinal implants that do what Google Glass does.”

“There are going to be enhancements to our vision, to our hearing,” he says. “You can’t really stop them because there’s a good side to all this.”

This article originally appeared in the April 2014 issue of the ABA Journal with this headline: “The Eyes Have It: Likely to become a high-tech trend, Google Glass is already causing legal experts to see problems.”