Sisters Rosie and Phyllis out for a rare walk in Seattle’s Madrona neighborhood as stars in a Goat Justice League music video. Photo courtesy of Goatjusticeleague.org.

First came the chickens, then the bees. So what’s the next animal that may be residing in a backyard next to you? Maybe goats. As the small-scale urban animal husbandry movement becomes a force in everyday urban life, more and more jurisdictions are being forced to revamp their laws to allow residents to hatch their own eggs, keep their own hives and—now—tend their own goats.

This spring, the city council in Wenatchee, Wash., amended its zoning code to allow residents in the town of 30,000 to keep goats, chickens and other animals in their yards, provided they have a certain amount of land. The law—which has a one-year review period—still bans peacocks, roosters and swine (they’re too loud).

Joe Morrison, managing attorney of the Wenatchee office of Columbia Legal Services, was one of a number of residents who petitioned the city council to change the law. He was partly motivated by his daughter’s desire to take up chicken farming—she’d seen some baby chicks at the local hardware store and got the bug to raise poultry for herself—and partly motivated by the fact that the old law was nonsensical.

“The city ordinances were hopelessly outdated and completely confusing. They were so bad that rabbits were designated fowl. If you wanted to have a chicken as a pet, you had to have an entire acre of pasture land that was fenced,” he says. “It didn’t make any sense.” 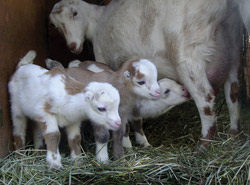 Wayne State University law professor John Mogk, who studies urban farming, says that as more people are becoming comfortable with tending their own farm animals, more cities across the country are starting to welcome urban agriculture in some form.

No group seems to track the number of municipalities that allow residents to keep farm animals on their property. But cities from Austin, Texas, to Little Rock, Ark., to Miami, New York City and Seattle have all recently changed land-use laws to permit urban agriculture.

Cleveland, for example, now allows residents to keep eight chickens or rabbits on a regular-size urban lot. Seattle—in response to heavy lobbying by the city’s Goat Justice League—changed its zoning laws in 2007 to allow residents to keep up to three small goats on standard lots. Residents with larger lots may keep up to four small animals, with additional animals permitted depending on lot size.

“There isn’t any reason why those who are engaged in urban agriculture shouldn’t be able to maintain animals on a limited basis. There’s no real downside,” Mogk says.

Not everyone agrees. Opponents have argued that animals like goats and chickens smell, are unsanitary and don’t belong in urban environs.

Nonetheless, urban farming proponents are winning over city councils. The Charlottesville, Va., Goat Justice League persuaded city officials there to overturn a 30-plus-year-old law banning goatkeeping. The law evidently was passed after a rogue goat wreaked havoc in the city.

One city council member, in an apparent overture to opponents of the new law, volunteered to round up any escaped goats. But so far that hasn’t been necessary because no one has actually gotten any goats, says Meghan Keith-Hynes, founder of the Charlottesville Goat Justice League.